Adoption Advocacy: A Home for Kindra 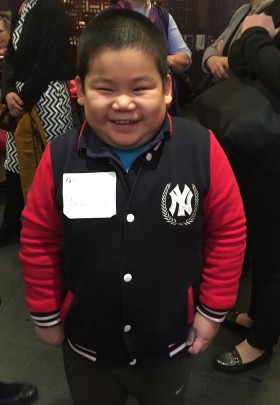 When I first met Jonas, he told me he thought I was too young to be his ambassador and then he promptly led me to the food table. This is the perfect snapshot of Jonas: he is both an entertainer and a food enthusiast. With his quick wit and humor, his laughter is contagious.

Although Jonas’ vision is impaired because of an eye cyst, it is clear that his condition has not delayed his cognitive development. I was amazed at how he could navigate stairs and crowded public areas. Orphanage staff rest assured that, with medical intervention, his vision can be corrected. He is a very artistic and smart 10-year-old. When Jonas and I were playing with clay, he could make me a whole tea set with cups. He can recite poems, but moreover, he is a linguist! He already knows some English phrases and put them to practice with me, such as “Good Morning,” “1, 2, 3,” “Let’s go,” or singing the “Happy Birthday” song.

"Jonas has so much unlocked potential. During the opening ceremony, it was clear Jonas liked the spotlight as he passionately sang into the microphone. What sets him apart is his bubbly and talkative character."

Regardless of age or background, Jonas has the unique capability of fitting in with any peer group. He is well accepted by the other children, and he can easily step into conversation with staff. He is conscientious and willingly shares his food with other children and orphanage staff. Spending time with Jonas one on one, I was able to discover some of his favorite things: bubbles, stickers and toy cars. From noodles to lollipops, Jonas enjoyed sampling everything.

It was an absolute thrill to spend time with Jonas because of his positivity. It is my hope that Jonas becomes a chef because of his passion for food, but it is my bigger wish that he finds a family in the New Year.

To learn more about Jonas, contact Jessica Zeeb at jessicaz@holtinternational.org.

His Joy is so Abundant! Jaylenn Needs a Family

She's a Gifted Artist and Will Age Out in Four Months