Put Your Own Oxygen Mask First 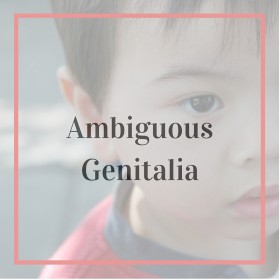 There is much confusion in the general public about children with ambiguous genitalia (sometimes referred to as “intersex”).  At the University of Chicago Adoption Center we often consult with parents pre-adoption and provide medical care post adoption for children with this diagnosis.  The following are items every parent should know before deciding to adopt a child with ambiguous genitalia:

View Children Currently Waiting for Adoption with this Special Need

The University of Chicago Adoption Center

The mission of the University of Chicago Adoption Center is to provide exemplary care, advocacy and research to meet the unique needs of healthy and medically complex orphaned children and their adopting families.

Embracing the Unknown in Our Adoption