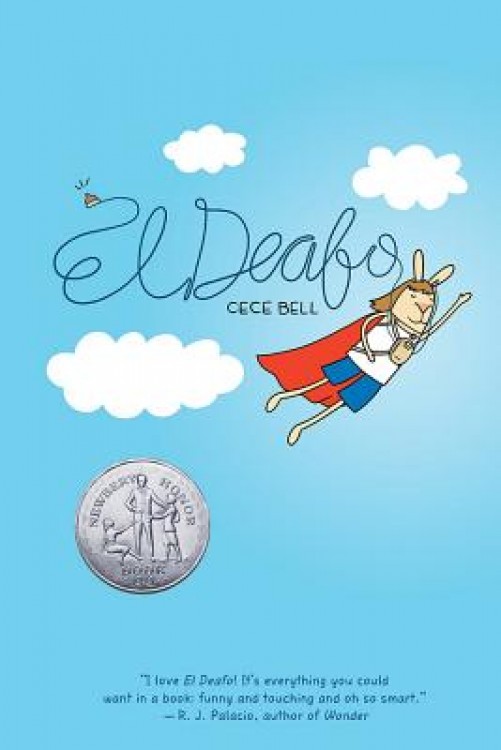 First off, let me say that I am not a big graphic novel fan. Nothing against them - in fact, comics and graphic novels are what brought my husband and I together - and there are a number that I've enjoyed. It's just that I am far more likely to choose something else when I have leisure reading time.

But whenever a graphic novel pops up on my radar as many times as tonight's pick has, I feel pretty sure it's something I better make time to read. And when I enjoy a book as much as I did Cece Bell's El Deafo, I start thinking that graphic novels should be added into my rotation a little more frequently. (It's been a banner month for the format for me - first Sisters by Raina Telgemeier, now El Deafo!)

So, to the review: Cece Bell is an accomplished illustrator but El Deafo is her graphic novel debut. You'd never guess it, though, as it's a fully realized work with no false moments or plot threads left dangling. Likely that's because El Deafo is largely autobiographical. I say largely because the main character in El Deafo is a bunny named Cece Bell - presumably the author is not in fact a rabbit, but I don't totally know that because I haven't met her (maybe someday).

El Deafo tells Bell's story of growing up with severe deafness as a result of contracting meningitis when she was four years old. Don't think that she's going to gloss over any parts of her illness just because the book is for young readers; Bell talks about being in pain, about not knowing why, and the scariness of first realizing that she could no longer hear. We follow her through getting hearing aids, then a more powerful hearing aid for school - thus becoming, in time, "El Deafo", a girl with supersonic hearing thanks to her Phonic Ear and the microphone her teachers have to wear. (One superpower? Being able to hear when the teacher is coming back to the room so everyone can scramble back to their seats. Niiiiice.)

Bell is candid here about the ups and downs of her childhood, which I think all readers can relate to, hearing or not. There's a good dose of humor, and she's not afraid to laugh at herself or others - I really love that she brings out how one friend goes WAAY overboard with accentuating in-di-vi-du-al sy-ll-a-bl-es. El Deafo is Cece's alter ego, a person who does all the things Cece herself isn't always brave enough to do, like calling out that same friend for her pronunciation exaggeration. And I like that the struggles Cece faces don't always have to do with her deafness, but are rather those that kids and former kids everywhere will get - like feeling awkward, being frustrated with your mom, having trouble finding and keeping friends. That's childhood, people, and we all know what those issues are about.

Readers who enjoyed Smile and Sisters are a natural fit for this one. But go a bit further too - to readers who like novels like Wonder or A View from Saturday. El Deafo is one of my favorite books of this year, or any year really. Share this one with your kids, for the bright wit and serious insights, and the sheer joy of a story brilliantly crafted.

Theraplay Activities: A Window Into Attachment

How Long Does it Take to Adopt? A long time. Here's why.