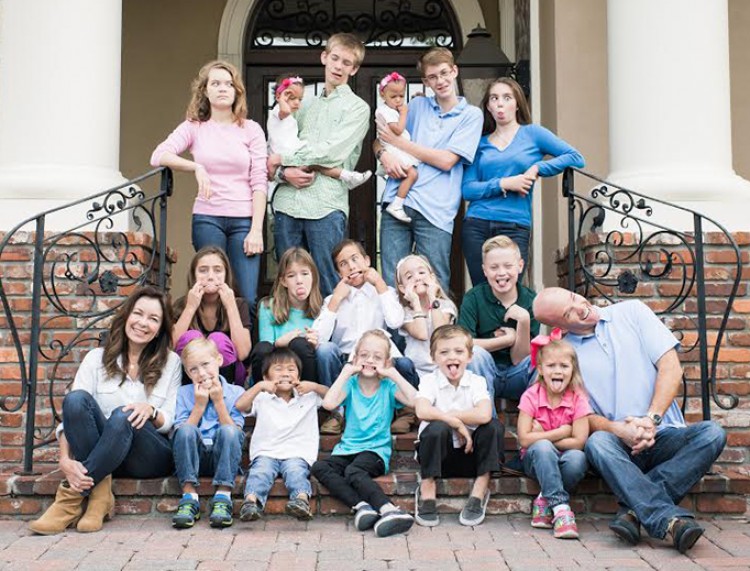 If anybody thinks Catholicism is boring or outdated, they ought to visit the King home in Lake Mary, Florida, where authentic Catholicity, joy, and children are found in abundance.

Christy King, mother of 18, says, “While our large number is what initially draws people’s attention, what actually defines us is our Catholic faith.”

Troy, a pediatric dentist, and Christy chatted with the Register to share some thoughts about raising faithful kids and life at home with a large Catholic family.

When you were first married, did you envision having a family like the one you have today?

[Christy] We were married in June of 1997 after dating for nearly 10 years. You would think that we would have discussed everything in that amount of time, but the subject of children never came up.

[Troy] I had hoped to have kids, [but I] never thought about [having] more than four. I enjoyed Christy's family because she was the oldest of six kids and it was always fun when I visited.

[Christy] Troy was somewhat surprised when a few months after we were married I told him that I didn’t feel like I wanted kids. He didn’t say much at the time, but needless to say, 20 years and 18 kids later, I have gotten some good laughs from that story.

What has inspired you to keep growing your family and welcoming more children into your family through adoption?

[Christy] in June of 1999 our first daughter came along, and a few months later I found myself pregnant with #2.  While pregnant, I began to think about adoption, not knowing the future challenges that I would have with pregnancies.  We welcomed our first adoptive child in 2003 and I announced my next pregnancy when she was one week old! (When I told Troy, he just laughed.)  When we adopted the first child we knew that it would definitely not be the last. “Just one more adoption” and a few more pregnancies have turned us in to the two-van family that we are today.

[Troy] Being open to life has taken on new meaning for me since we adopted our first child. God has pushed us to not only welcome any pregnancy we may be blessed with, but also to certain adoption situations.

One of the greatest benefits of having a large family is participating in and seeing so many relationships. What a treasure it is that each one of us has such a vast network of support. Each kid—and parent—benefits from every single relationship in the family.

And there is always someone to help with the cooking and chores!

[Christy] A frequent question I get is: “Are the little ones jealous when you bring home a new baby?”  Truthfully, we have never had that reaction. Our newest addition is almost three months old and the fights revolve around whose turn it is to hold him and pick out his outfits!

How has your faith played a part in your family’s growth over the years?

[Christy] In my experience, this is where prayer and truly putting trust in God comes in to play. When our door is open to life, whether through pregnancy or adoption, our worries are very small. Sometimes God sends someone through the door and sometimes He doesn’t.

For me, it’s like riding in the backseat of the car and letting the grown-ups take care of the driving. I’m just along for the ride!

This path has led to some enormous blessings that we would have likely rejected if it were left to us.  Aside from a few preemies, our first serious health issue came with our 10th child.  She was born under less than ideal conditions, and we knew she might face some challenges.  Had we known at the time that she had cerebral palsy, we probably would have persuaded ourselves that we had enough on our plates and someone else should take that on. Happily, God in His wisdom sent her to us without that bit of information. What a blessing she has been for our whole community.

While she is unable to walk without her walker, she attends school with the other kids and even “runs” on the track team. So many of her peers, including our own children, won’t grow up feeling awkward around someone with special needs because they have gotten to experience her normalness firsthand. God obviously knew what we could handle far better than we did.

What role does your Catholic faith play in your family life? What are some of the practical ways you try to hand on the faith to your children?

[Troy] The most important way we incorporate the faith into the kids lives is to take seriously our responsibility to be the primary catechists and teachers of our children. We do not expect to drop them off at the local parish school and have them learn their faith automatically.

[Christy] While our large number is what initially draws people’s attention, what actually defines us is our Catholic faith.  It is the background music that is playing while we live our everyday lives.

We incorporate prayer and our faith into the whole week.  We pray before every meal, every time we get in the car, and we consistently pray the rosary together as a family. We love to pray with their friends as well.

There are reminders of our faith throughout our house like crucifixes and pictures of the saints.  And when we are making decisions, we make sure that our kids know that our faith is the compass we use to make our choices.  When the kids see us praying together or reading books to learn more about our faith, it becomes a priority for them as well.  Our Catholic faith is the foundation for everything we do.

[Troy] Mass with the family is great. I look forward to having them all recognize Jesus in the Eucharist. I love that we can all stay in church (most of the time) and enjoy the structure it brings. They know from an early age what is expected of them during mass. I absolutely love walking with each and every one of them on their journey toward making the faith their own. It begins and ends with the Mass. We NEVER miss mass on Sundays or Holy Days. It’s just that important. If Jesus is showing up, [we’re] showing up.

[Christy] This does not mean that the kids are always excited about Mass and prayer time. (There may have been a time when Troy threw his slipper across the room at someone who was goofing off during Rosary time.) While they may not yet all grasp the magnitude of the gift of their faith, I am hopeful that they will recognize its value by observing the priority that we give it in our lives.

What kind of advice would you offer other parents passionate about raising a devout Catholic family?

[Christy] Put your spouse first.  For years, Troy and I have had a set date night once a week.  Once, one of the kids was disappointed because he wanted to come with us.  He asked Troy, “Why do you always go out with Mom?”  He replied, “One day all of you will leave, and I will be here with her.  I need to make sure she still likes me.”  Every time the kids watch us hug or kiss, they always smile.  When we argue, they are unhappy.  There is nothing that gives our kids greater confidence and peace than the knowledge that their parents love each other.

[Troy] We also incorporated no-screen Sunday’s about four years ago and have never looked back. The kids play board games, go outside and get really dirty, swim, build forts, read, and play kickball.  And guess what, they rarely ever say they are bored on Sunday's.

[Christy] If [your children] ask a question, answer truthfully. One of my younger kids asked me what the word ‘sex’ meant when she was about 8. I was horrified and wanted to know where she heard that and what she thought it meant. I could have given her a glossed-over answer, but instead I decided to give her the truth in a way that was age appropriate. Why?  She was already getting information from her peers, and if she was unable to come to me, she would have gone to another source who may not have given her an accurate or moral explanation. I wanted her to be confident that if she came to me, I would give her an honest answer.

[Troy] Begin with the end in mind: Heaven. Our kids know from an early age that we are trying to point them in that direction.

Finally, keep this order in your life: God, family, work. Keep the order; keep the faith.

Reprinted with full permission from the National Catholic Register

Catholic Hearts for Orphans is a Facebook group made up of Catholic adoptive families. Here, they discuss how their Catholic community can better serve the orphan ministry as well as share insights and promote orphan care ministries and adoption within their Catholic faith. Founding member, Lisa Murphy, created Open Hearts for Orphans, a non-profit faith based organization making a difference for vulnerable children in three areas-medical intervention, meeting the basic needs of orphaned children and providing  "Say Yes" adoption grants to familes in the adoption process.

The following children live in a Catholic orphanage and their placing agency is seeking Catholic families only. This is a requirement of the center where they live.