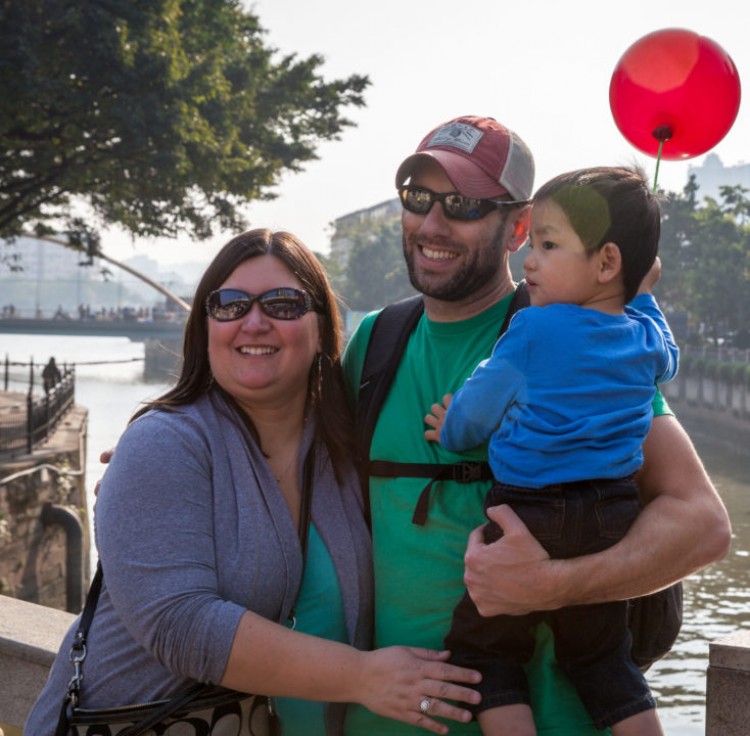 After several years of trying to have our own biological child, we realized adoption was going to be our next step. Adam and I went to several different adoption orientations. At first, we were planning to adopt a child domestically in the U.S., since the rumor was that it would take 2-5 years to bring home a child through international adoption.

Then one evening, at yet another adoption meeting, the social worker mentioned that the China adoption process is typically quicker than other country programs. I am half Chinese, and adoption from China was a no-brainer. Adam and I looked at each other and — surprise! — we both knew that this was the way we were going.

Not trusting all of the signs right away, we still vacillated for a while, between domestic infant and China adoption. We did know from day one that unlike the majority of families adopting internationally, we had no preference in gender. Just like a biological child, whose gender you don’t get to pick, we were open to either a girl or a boy.

One night, as I was cooking dinner, an Operation Smile program came on. I found myself engrossed in the stories of children who received cleft lip/palate repairs through the organization, and the amazing work that was being done…I was in tears.

We decided we are going through with China adoption, open to either gender, and open to a child with a cleft lip/palate! We sent our registration to Holt in April 2015, stating that we were interested in pursuing international adoption in China.

The paperwork process was long, but we learned so much. We felt kind of bad when it came to the checklist of medical ailments that we would be open to. We felt like we were picking our designer child, and didn’t want to leave any child behind. We knew the rationale for the checklist, however, and that Holt wanted to be sure that we were matched with a child whose special needs we could handle.

The waiting process was grueling. Our dossier arrived in China, just before Chinese New Year 2016. We knew this would delay the match, but we were praying it would occur in a short period. It took almost three months. Finally, one evening in late March, we got the fateful phone call from Beth Smith, Holt’s director of China adoption services. She told me we were matched, and gave me some details about our potential child. After the call, she sent an email with a picture and more details. Unfortunately, Adam and I were in two different cities at this time. We were matched with a little boy, approximately 18 months old, who had a cleft lip! We both looked at the picture, and fell in love immediately. We knew this was a match made in heaven!

I will not say that the next steps were easy. We had some very frustrating delays that were out of our hands to expedite.

But there is no question, our son was already waiting for us.

And we still had moments — signs, “God winks,” whatever you want to call them — where we knew all was right. Over the summer, our neighbors had a “welcome Landon party” for us at our favorite Mexican restaurant. We were all mingling and enjoying each other’s company in a small private room. Out of nowhere, a little Chinese boy, about 2, comes running into the room. We all stopped, mid-conversation, and knew that Landon was with us!

Finally, we got the call that our little guy was officially released. I found a timeline online regarding all the steps. I stuck to it like glue, since I finally had some control over the situation. We moved right along, and received travel approval in December 2016.

Our meeting (“Gotcha Day”) with Landon was so surreal. It was crazy that we had been in love with a bunch of pictures and a few blurry videos, and we were now meeting our son in the flesh. It all happened so naturally. Landon bonded so well from day one. He is all boy, through and through. We jumped into parenthood head first, and haven’t stopped moving! Adam and I frequently say to each other that we are amazed that just a few months ago, Landon wasn’t with us. We couldn’t imagine our life or family any other way.

We have a picture over Landon’s bed that we purchased months ago. At the time, we knew what an adventure adoption was — and what an adventure becoming parents would be. We have had so many signs and times of assurance during this process. We thank God for putting us on this crazy ride. Landon is our number one priority now, and Adam and I feel so blessed with the treasure we have been given.