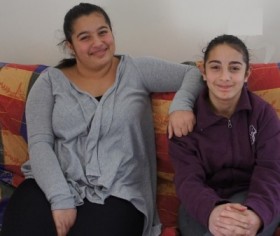 Urgent Need for Two Sisters: Their Fear? To Be Alone and Forgotten

UPDATE! 6/6/17  We are thrilled to announce Deborah and Shayna have a family! To all who advocated for these beautiful sisters, thank you!

"While we were talking, I understood something – they really want to be adopted, they just don’t believe this blessing will ever be given to them. They shared that they feel they are left behind and they are starting to lose their hope that a family could be found for them."

Today I am asking you to take a moment to consider if these beautiful sisters could complete your family.  Deborah (RK# 36695), almost 15, and her sister, Shayna (RK# 36697)12, have so much love, joy and energy to bring to a family that would open their heart and home to them. The girls would be a perfect fit in both families with or without other children. These girls have high aspirations and seem to be the kind of kids that will strive for them with the love and guidance of family.

As I sit here reading about this sister set, the thought keeps running through my mind that "if I could, I would." I am so impressed by the profile of these girls as provided by the social workers at our partnering agency in Eastern Europe.

In 2014  Deborah and Shayna, along with other children, were moved from an orphanage that was not serving their needs well to another center. Since coming to live in this center, the children have flourished with the care given there.

My impressions of the two sisters are that they both had have more than enough disappointments in their life. They are very sweet, bright and loving and they really deserve to have a family that would love and appreciate them~Deborah and Shayna's social worker

Although they are close to each other, their personalities are very different. Deborah has a strong personality and well-expressed and developed leadership qualities. Shayna is more quiet and introverted, she tends to follow her sister’s lead and let her decide for both of them. However she has strong opinion and is not afraid to speak her mind. Both girls are nice, smart and good children who should be given the motivation to believe in the 'happy ending' again."

While Shayna does intend to be introverted, this has decreased over time. She feels strong desire to form friendships, to interact and to share. She demonstrates stability in her behavior as it doesn’t change much as per the respective situation. She is genuine in her interactions with people, and enjoys interacting with both adults and her peers.

Shayna has interests in cooking, swimming and listening to music (both in her native language and American). She and her sister have learned some English.

Deborah's favorite subjects in school are Bulgarian Language and Literature and History, and this fact is not without reason: Deborah dreams of being a psychologist or a lawyer. These subjects are on the entrance exam for law school in Bulgaria. She has started learning English as well. In her spare time, she goes out for walks with her friends (they go in the neighborhood, to the town center, to an Adventure park, etc.), they talk and study together. She also enjoys listening to music (all kinds of music) and dancing Bulgarian traditional dances.

When asked if they want to be adopted (for a 2015 report), Deborah answered “Yes. Everyone wants to have a mother and father regardless if they are your biological parents”. She added that she prefers to be adopted abroad than in Bulgaria. Deborah shared that she want her family to love and be there for her and she does not care if they are rich or poor. She said “I want our parents to love and be there for us and provide us with the love our biological parents have not given us.”

In a recent updated report (2017), the social worker met with the girls again and reports, "I’ve talked with them for about an hour and a half, before turning the camera on, just listening to their hopes and fears. They feel so alone and forgotten, Deborah even said 'Everybody leaves, so we need to count only on ourselves.'

At one point Deborah shared her vulnerability about growing up and some day having children of her own,  "If I have children, I will never give up on them. I don’t want them to ever feel this way."

Parent Qualifications for Adoption from Bulgaria:

Bulgaria often shows a great flexibility (in age of parents and family size) for children with special needs, sibling groups and those at risk of ‘aging out’ of the younger orphanages and being required to move over to the older orphanages.

Deborah and Shayna need a family today! Would they complete your family? For more information, including videos please email International Adoption Net today!