Women Who Notice: Speaking Up & Reaching Out Post Adoption 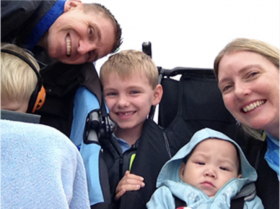 When we told people we were adopting from China, almost everyone we spoke with asked if we were going to take our two biological sons (four and seven years old) with us to get our 19-month old daughter. For us, it was a no-brainer! Of course we take them to see where their sister came from and experience the culture and people. I had been to China as a single person and wanted them to see it too!

When the time to travel got closer, we crunched the numbers and started to wonder if we bit off more than we could chew! We wanted to take the boys, and they had been told for nearly a year they would get to go, so we went ahead with our plans. We trusted that it was God’s plan for us and them and it would work out. To help with the budget for the trip, we sold a few stocks.

There are many good reasons NOT to take your kids with you (finances, juggling emotions of kids processing everything, wanting to focus on the new child), so we fully support families who do that, but we are so thankful we took our kids with us. We had our share of travel challenges, but we paced ourselves accordingly and indulged in “travel rules”, our parenting philosophy that we’ll break our other usual rules to get by when we are on the road. For our four-year-old son it meant a lot of time playing Lego games on his Kindle Fire. For our seven-year-old it meant letting him stay up a little later to hang out with Dad when Mom was putting his little brother and sister to bed. It meant a whole lot of granola bars and a lot of Papa John’s pizza and Starbucks hot chocolate. (I look forward to going back and giving the kids a more Chinese culinary experience, but there was no way we would last more than 15 minutes in a restaurant!)

The experience was one of a lifetime for all of us. Our daughter met us as we are-a family. With two brothers who will smother her with love (appreciated sometimes, annoying at other times), and a mom and dad who have to balance all three kids. The boys helped her see that Mom and Dad will provide for her needs and are to be trusted. They were able to engage her and play in a way that only siblings and kids can. Every time she woke up in the morning or from a nap her first wish was to see Gege (older brothers) and Baba (Dad).

There were some challenges to our trip, like our 4-year-old struggling to adjust to a new world of not being the baby anymore, and having to settle back into the pace of life with a very active toddler who was into everything! But we took advantage of our daughter’s nap times for the boys to have special dates with Dad at the pool or to check out historic sites. Between her naps and jet lag there was a lot of down time where the boys could just enjoy being with us and then get really excited for her to wake up and join them to play again.

We’ve been home for two months and we are settling in as family. The boys comment about how they feel like she’s always been with us. It’s true, it seems like she’s always been a part of us. I am glad the boys were able to go and pick her up, see her culture, meet the orphanage workers, and be a part of those first bonding moments. I encourage you if you are wondering if it’s a good idea, I think it can be a real blessing if you are prepared to adjust life as you create a “new normal”.

Some practical advice: Our kids were super excited to do the LONG flight to China and all the travel because I packed “travel presents”—when it was getting dull or I felt like they needed an incentive to make it just another hour or another flight I would pull out a wrapped gift that would help entertain them. Sometimes it was just a small coloring book, a favorite snack (plane food is interesting, but not delicious!) other times it was a Lego to build or a matchbox car. All things that I probably would have brought anyway to help with the trip, but when it was a “surprise present” it got us through some bumps. We also made sure both boys had Kindles and loaded them with paid-for content. The free Amazon stuff isn’t accessible in foreign countries, and there was not much English TV. Having the Kindles with lots of shows and games got us through many a waiting period, even those long jet-lagged mornings when they had to wait hours before breakfast was open.

We also got two adjoining rooms in the hotel. Technically we could have all fit into one room, but we knew with jet lag for our boys and a daughter who would likely cry a ton the first few days, two rooms was the way to go. I wanted to have our first weeks as a family to be as peaceful and restful as possible and figured we’d bite the bullet on that as well to make sure everyone’s needs were being met as well as possible. It was definitely the way to go, and in the province the hotel was cheap so it didn’t add much to the cost of the trip.

It's amazing how a few little practical things can go a long way to making the overseas trip a bit more smooth. Having said all of that, the trip is real and the challenges are real. When we arrived back at our home airport my 4 year old's grace lifted. He completely melted down. Thankfully after the terrible 20 minutes waiting to deplane (smiling at all the people who might have been wondering if we would survive with 3 kids!) we bought him a chocolate milk at Starbucks and he recovered. In the easy and hard moments, we were thankful we all did the adventure together.

Carolina Adoption Services is a non-profit, international children's charity committed to finding stable, loving, adoptive homes for children in need of permanent families and dedicated to improving the quality of life for orphans and vulnerable children worldwide. In addition to comprehensive adoption services, CAS offers programs and services such as home studies, humanitari...