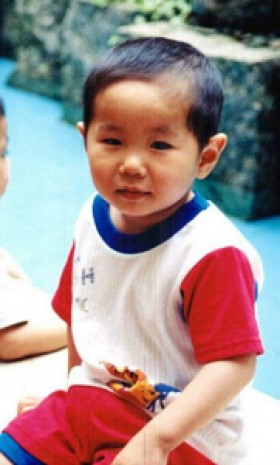 The following story was written by Cindy who adopted through Great Wall China, 4 year old Jaclyn in July of 1999. Little 4-year-old Jaclyn had a "baby" at the orphanage that they visited in October of 1999, when Cindy’s sister, Laura adopted Willow, a three year old in Kunming. They all returned in October of 2000 when Cindy’s sister adopted "Jaclyn's baby", now named Lee.

Last week we celebrated Lee's adoption day. He's lived in my heart for what seems an eternity, so it was amazing to realize that he had only officially been in my sister's family for a year. We all went to a Chinese restaurant to celebrate and our combined offspring, both biological and adopted, loved having a chance to dress in their traditional Chinese garb. "I look like Chinese boy now!" Lee said while smiling at his reflection.

Lee is different from anyone else in my life in the sense that I never, ever take him for granted. I can't keep my eyes off of him anytime we are together. I shamelessly beg him for hugs and kisses. I can't stop myself.  I know I shouldn't take for granted anyone that I love. But I have not yet lost anyone whose place is in the inner sanctum of my heart. Those that I love most, I see often. I assume that they will be there in the arrogant way that those who have not known crushing grief have. But Lee is exempted from that. Because I loved him for so long while he remained out of our grasp, I never, ever want to lose sight of him again.

In thinking back on the last year, I realize that the gift that Lee has brought with him is peace. Let me explain.

First, he has brought peace to Jaclyn's heart. I can bear her prayers now. They have lost their frantic edge, their jagged emotion as she pleaded with God to bring her baby home. And even though she never, ever lays her head down at night without a prayer for Lee, these are now, finally, the prayers of a child.

Lee has blossomed in the past year and is a delightful, joy-filled sprite of a child. He bears no resemblance to the emaciated, bug-bitten, balding waif we first met so long ago. He and Jaclyn still delight in each other. At her birthday party, Jaclyn saved the seat next to her, the seat of honor, as she always does, for Lee. He rejected the play clothes that his mother chose for him to wear to the party. "I pick something else," he said firmly. He selected his good dress pants, his white shirt and vest, and insisted on a tie and his "pretty shoes". "Now, Jiao Jiao say I handsome!" he said with a smile.

Lee talks about Jaclyn's  caring for both him and a girl named Po Po in the orphanage. Lee went through our photos and pointed out Po Po for us. Jaclyn has always refused to do so. It's as if she knew that she could not save them all. She had to hold in her heart only those that she loved most dearly.

Lee has shared some of his past and a few stories about the bullying that he endured after Jaclyn left the orphanage. Like Jaclyn's recollections, many are painful to hear. The most heart wrenching is his account of a child kicking him in the back, multiple times, until he finally toppled onto the hard cement with such force that his nose was broken. This is what had caused the black and blue marks we saw in one of the photos while we waited for him. "Who do this to you?" Jaclyn asked him as she showed him the disturbing photo. He told the story and carefully pointed out the culprit while looking through our album.

" I knew it! I knew it was him! He very mean boy to Lee," Jaclyn said in a somber tone. "He not share his chair nicely with Lee at school. Lee never had enough chair. But I couldn't help him because he sat in the back and they made me sit in the front." And then, later with sadness she asked, "Why God make mean boys?"  But gone is her rage.

When she came to me months after she was adopted and demanded to know, "Who do this to me?" while showing me her scars, she was filled with anger. The anger is gone. She has let go of it. He is safe. That's all that matters to her now.

And, in a similar manner, he has brought peace to my heart, too. I know you can't save them all. But while he lived there, his face, his pain, his sadness, was all I could think about. Now the rest are faceless to me. Their hurt is less personal. I am not haunted in the same was by them. I still feel their need. But I don't know them, like I knew him. So the pain is now bearable. "My peace I give to you. Let not your heart be troubled."

But these kids have made me think of a bigger peace, too. Since September 11, like all of us, I have preoccupied with trying to fathom the hate in this world. I wonder how others who don't know us, can hate us so much.

It makes me reflect about how the U.S. first forged bonds with the people of China. I'm old enough to remember when President Nixon first traveled to China. Who would have ever thought that such different lands, ones that had closed each other out for so long, would be able to one day forge an alliance to help children? Could there be two more different countries? Yet we have been able to put those differences aside and join together in a larger purpose--helping children find families.

I think, too, of my first trip to China and the close bonds we established with our guide there. She was a young woman in her 20's and, as she got to know and trust us, she openly shared her thoughts about the international adoptions. She confided that many of her contemporaries thought that she was wrong to work in the adoption program. She said that they felt humiliated by having "rich Americans" come and "buy their babies". They would say, scoffing: "They take advantage of China because it is a poor country. But once we have money, we will go there and buy their babies."  I asked our guide how she answered them and she said, " I tell them to go to the places I have gone. I invite them to see the orphanages for themselves and then tell me that this is wrong." And, with a smile she added, " I tell them how much you love the babies."

But then she shared this heartache, too. She told me about one of the first families she had helped adopt and how they had recently returned with their now five-year-old daughter. "But 'ni hao' was all she could say in Chinese, "she said with obvious sadness. " Li Dan is a Chinese girl. Promise me you will teach her about her proud homeland. Promise me that when she visits, she will know Chinese." I solemnly promised. Li Dan, now my Christy, is four years old In spite of my good intentions,  "ni hao" is all she can say in Chinese.

And I ask myself, too, how I would feel if Chinese citizens came here and adopted American babies. Would I be able to trust them to teach these children how great our country is? Would I be able to smile and say "lucky baby" while flashing a 'thumbs up' sign the way that they do? Would I be as gracious and as welcoming as they are, putting the needs of the child first?

I think, too, of our trip to Jaclyn, taken just three weeks after the U.S. had accidentally bombed a Chinese embassy. There was a travel advisory in effect and I had watched the anti-U.S. demonstrations with some apprehension. The topic surfaced during one meeting that we had with Chinese officials. I was quick to offer an apology. I'll never forget what happened next. The official looked directly into my eyes and said, "Government is government," with a dismissive air. Then she took my hand and said, "But people are people."

It's a distinction I think of often. We're all so much more the same than we are different. I'm grateful for the way that the Chinese have never allowed political matters to affect the adoption program. These children, are, ultimately the bridge between our two very different countries. They are, like Lee, the peacemakers.

Whenever I despair about the hate in this world, I only have to look at my mail to see another truth. Nearly every week I get an email from an unknown friend who asks for an update on how Lee is doing. Jaclyn received birthday cards from loving people that we have never met And I know how many special little ones live in my heart, too. Children who have yet to be referred. Children whose stories I have followed. Children I have prayed for, yet never met. There is more goodness, more love, more caring in this world than there is hate. I know it. I feel it. As long as we continue to reach out to each other, through these kids, we will continue to forge a path toward peace.

Lee, like Jaclyn, cannot stand to see the suffering of others. He is the first on the scene if any of his sisters starts to cry. He dissolves into their grief. He comforts, too. He cannot stand to see them punished. I had worried that the bullying, the hate-filled moments, the hurts in the institution would have stolen from him the capacity to empathize and care. But this child knows how to love. He has been wronged, but he knows how to offer comfort.