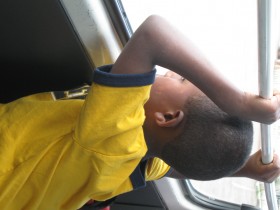 In My Son's Defense

Last night my son excitedly waved a National Geographic in front of my face.

M: The Titanic!! And they found it in the ocean!!

His enthusiasm gets an A+. His knowledge of world history…well…he’s not quite meeting standards. Its excusable though, because in truth, the first six years of his life he was living under a sedimentary rock formed with layers of death, poverty, and basic survival.

Little did I know when I walked down the jet bridge holding hands with my son in Ethiopia that when I exited ten hours later in Amsterdam we would be introducing him to a world so new, so fluorescent, so busy he would hardly have time to breath.

Addis Ababa’s airport is bare bones. No ‘Welcome to Ethiopia’ store, No Starbucks. No people movers. No drinking fountains. When we boarded the plane, my son blinked rapidly, squinted from the bright lights from above, and settled into his seat with nervous energy. He was George of the Jungle leaving the only jungle he ever knew. When the KLM pilot flipped on the safety video, he jumped back, startled that the tiny grey box mounted on the seat in front of him came to life. With each direction the stewardess pointed in the video, he would follow. His eyes would lock in on the EXIT signs and then swiftly he would return to face the video and speak to the lady in his native Amharic language, nodding and assuring her he had indeed checked that safety procedure off his list. He slid off his seat to sit on the floor in front of his seat and then placed his head under the cushion to locate his floatation device. He then returned to his seat, face the video and again spoke to the lady in Amharic, nodding and assuring her he had checked that safely procedure off his list.

Quickly and enthusiastically, my son was learning.

When we arrived in Amsterdam we were weary and still had a long flight ahead of us. Marching toward our connecting concourse we hopped aboard the moving sidewalks, thinking nothing of the fact that he had barely walked on a sidewalk, let alone one that moved for him. One second he’s up…the next second he is down…sprawled across the moving sidewalk with his arms spread wide and legs extended straight behind him. The only thing missing was a red cape or he could have been mistaken for Superman. I guess he was also missing a smile too, because the look of terror across his face at the situation he was in was like no other. My friend Cindy was behind him and quickly picked him up and carried him off the human conveyor belt. The next time we came across a moving sidewalk I motioned to him we could walk along side it. He shook his head and hopped aboard, this time holding on to both handrails and staying upright the entire length of the sidewalk. When he hopped off at the other end he had a smile as bright as the fluorescent lights above him.

Quickly and enthusiastically my son was learning.

Once we settled into a corner of the airport to wait out our six or so hour layover, the small group we were traveling with took shifts watching over our new children,  but not before we found a drinking fountain. Fresh, safe, clean water at our disposal. Something we missed during our time in Ethiopia. Once again, without thought I walk up to the drinking fountain with my son and took a sip. His eyes grew wide. I looked down at him, smiled, and pressed the button again. A stream of cool, clean water arched out of the fountain. His eyes grew wider. He walked over to the wall and examined it with his long, slender fingers. He got on his knees to glance underneath. He stood up and quickly pressed the button and giggled when a stream of water spit out of the hole. Cause and effect. He pressed the button again, this time for five seconds. He didn’t drink the water. He just watched it. I could just see his brain in motion. Water. In the wall? I encouraged him to drink it, but he was unsure. Water where he came from meant illness and sometimes death. I leaned down and took another sip. Cindy did the same. And then my son did. Soon a sip turned into a gulp. A gulp turned into gulps.

Quickly and enthusiastically my son was learning.

It wasn’t until we were home that I realized how big this adventure truly was. We adopted this boy from a simple existence and dropped him dead center into the world of “reality” tv where he had to work overtime to decipher what was fact and what was fiction. He watched a few minutes of the movie Titanic but then a few days later he saw that same guy on an old episode of Growing Pains. If the guy is still alive then the Titanic didn’t really sink. Don’t even get me started on how Hannah Montana completely confounded him. I still don’t think he’s figured that one out. In all honesty, for several months we just watched cartoons, because it was a lot easier on his thought process. Tom and Jerry fought, argued, played the banjo, and enlisted in the army but they were cartoons. They weren’t real. Reality was a very confusing concept.

I’ve been with my son for just about every single step of his journey in America. So when he comes up to me excited that he’s composed a new song only to find out Pachabel composed in 350 years earlier or that the Titanic had been found, on the bottom of the ocean no less, I can’t help but smile, because in my son's defense.. just like that first leg of his journey so many year ago, he continues to discover something new, quickly and enthusiastically, every single day of his life.