Home Studies: What Are They and Why Are They Important? 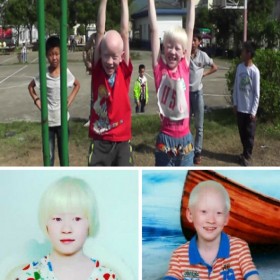 The future for an orphan with albinism in China is bleak. Once aged out, these children face the prospect of being shunned in every aspect of their society.

Twins Ally (RK# 34670) and Greg, 10 (RK# 34671) are diagnosed with albinism.  They were abandoned when they were only four days old. For the first six months of their lives they moved between foster homes before settling down with the same foster family for just short of nine years. Ally and Greg were recently moved from this foster home last August because their foster “grandparents” felt they were too old to continue caring for them. Their “grandparents” were important to them and they still visit them on the weekends. In their new foster home, Greg and Ally are becoming much more mature and sensible. They say that they feel the warmth of being cared for in a way that they hadn’t before. They also have seen love when other children at the orphanage have been adopted by their forever families. They want  to be adopted and experience that same feeling.

Please share Greg and Ally's story! If now is not the right time for you it may be the perfect time for someone you know!

Both Ally and Greg have developed well. By the age of 1.5 years old Greg was able to say some simple words and sentences clearly. By the age of 2, he was able to walk steadily. Ally was a bit faster and was able to speak at 15 months old. From a young age, Ally enjoyed playing with others. When she was 10 months old she would communicate through body language a desire to be held and taken outside.

Greg and Ally are described as being very active. Between the ages of 3 to 6, they loved to be outside and play tag together. They played often with other children and got along well with them. Ally was described as curious and adventurous at this age. Both children had good imitating ability. The caretakers say Ally learned just as fast, if not faster, than those her age. They said that Greg would need others to show him how to perform a task (i.e. tie his shoes) a few times before he could grasp it fully and do it on his own.

Both children are currently in fourth grade in an elementary school in their village. The teachers say that their grades are not great because of their poor eyesight associated with their albinism, but they are both clever and active. The caretakers say that sometimes the twins seem to be telepathic because of how in-tune to each other they are. When one doesn’t feel well, the other feels it too. Ally had trouble adjusting to school in the beginning, but is now comfortable thanks to the support she receives from her teachers, classmates, and her brother. Both children love to play outside at school. Greg has good coordination and is very interested in sports, especially basketball and swimming. Ally enjoys riding her bike, jumping rope, and dancing. They both enjoy school and get along well with their classmates. Ally and Greg are very clever.

Need a little encouragment while considering if Ally and Greg could be your children? Take a moment to read a wonderful story about adopting a child with Albinism!

Read more about NOAH, the National Organization for Albinism and Hypopigmentation and incredible support organization for families raising children with Albinism.

To learn more about Greg and Ally, please contact Cradle of Hope.