Book Review: Who's in My Family? by Robie H. Harris

Strategies to Deal with Anger and Power Struggles 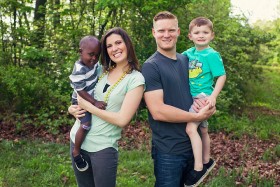 Daniel and I were married in 2009.  Two years later we expanded our family when our oldest child Sawyer was born. We were thrown into the role of parenting and we can both agree it wasn’t exactly easy! After a year or so of adjusting and when he finally started sleeping through the night and we could see straight again, Daniel and I decided we were ready for Baby #2. Throughout the next year, it became clear to us that adoption was the way God had chosen to build our family this time around.

Despite believing very much in domestic and infant adoption, we knew our hearts were called to adopt internationally. We narrowed down our country choices, finally settling on Uganda. We researched agencies and called just about every one we could find who partnered with Uganda.   We were almost ready to sign with an agency when we heard from missionary friends in Uganda who told us that that particular agency had a bad reputation within Uganda and they personally would not recommend signing with them.  Heartbroken, we put our adoption on hold, researched ethical adoption, learned what questions to ask agencies and how the adoption process should work, and went through the list calling agencies yet again. Finally, we called European Adoption Consultants, an agency we had overlooked before because we assumed they only worked in Europe. We spoke with several representatives and they answered each of our long list of questions honestly and thoroughly. We decided to put our trust in EAC to help us bring Baby #2 home.

Throughout the adoption process we had a great working relationship with EAC. They were encouraging yet honest. We were consistently updated. During the waiting period that was so important to me! Once we got our referral, EAC prepped us for what we would experience in Uganda! They helped us with the intense paperwork for the dossier, court, and the embassy and they were careful to have every detail perfect before we left for Uganda.

We were happy with the in-country providers as well. They worked hard to keep us safe, complete our adoption journey, and get us anything we needed- internet, a phone, a Mountain Dew, etc.  While Uganda is a developing country and not the easiest experience, we believe EAC did its best to ensure our case’s success.

Now, we have been home almost three months with both of our boys. Judah’s amazing personality has blended with our family so well, and we couldn’t be more thankful he is ours! He is an energetic two-year-old who loves to be silly, play with cars and trains, and do every little thing his big brother does. It honestly feels as if he has been ours from the start, and we can’t imagine our lives without him. Becoming parents for the second time has been easier, and we are loving this time with both of our little boys!

It Takes a Village to Raise a Child