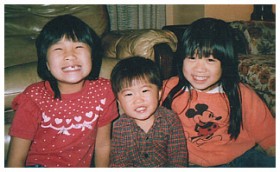 I was just minutes away from what was to be the most intense and emotional experience of my life.  I remember riding the escalator to the lobby floor of the Korean train station emotionless and detached from the situation.

The state of calm ended abruptly, however, as five tiny Korean women bombarded me before I even had the chance to take both feet off of the escalator.  These crying women with blood-shot red eyes pulled on me from all angles as they yelled at me in a foreign language.  I could faintly hear my social worker in the background translating unfamiliar words; however, none of this commotion and chaos mattered to me.  My attention was focused on the figure standing five feet in front of me.

My breathing became erratic and chills coursed through my body ending at each of my extremities.  Regardless of the feebleness in my body, I never broke eye contact with this man that stood directly in my line of sight.  I remember thinking how the man resembled a mirror image of me, but thirty years in the future.  The name of the man that stood in front of me was Cho, and he was my biological father.

The experience of meeting a biological parent is not a conventional achievement for most people.  For an international adoptee like me, the event is quite the accomplishment in both an impractical and emotional sense.  I consider myself extremely fortunate to have gone through and successfully completed the adoption birth family search.  For the majority who search, the typical result is an unsuccessful reunion in which the adoptee is left frustrated and hopeless.  Then again, the intentions behind my search for my biological parents may have been different than those of the typical adoptee.  I did not search with the intention to establish any sort of future relationship; in fact, I have not had any communication with my biological birth father since meeting him years ago.  I did not search out of resentment or solitude.  I believe I sought out my biological father for closure on a chapter of my life that, for the entirety of my adolescence, I didn’t realize needed closure.  The experience of meeting my biological father, although overall positive, helped me to realize how fortunate I am to be adopted.  I learned on my trip that my birth father and I have very different outlooks on life.  I recognized how difficult my life could have been had I grown up in his household.  At the end of our meeting, I politely smiled at him and thanked him for giving me up for adoption.

I had a lot to think about when I returned home from my trip to Korea.  Throughout the following months, I found myself reflecting on the sacrifices made by my adoptive parents in order to give me a better life.  For the first time, I truly appreciated my parents and recognized their selflessness and generosity.  I also thought about the influence of my two older sisters, who were also adopted from Korea, and the overwhelming support they provided me at every stage in my life.  I now had a deep-seeded appreciation for adoption and I was compelled to become involved in the adoption community as a way to express my gratitude for the opportunities I was given.

My personal adoption journey eventually led me to Connect-A-Kid, a nonprofit organization I founded that provides team-based mentorship to adopted children.  I can speak firsthand to the benefits of having older adoptees around.  The positive influence of my two older adopted sisters undeniably shaped the man I’ve become.   My vision is to have every adopted child connected to an adult adoptee.  Connect-A-Kid will connect the adoption community through mentorship, embrace cultural diversity, and celebrate adoption.

After a successful six month pilot program in Denver, Connect-A-Kid is proud to announce the official kickoff in Los Angeles on August 24, 2013.