Our Adoption Journey to Georgia 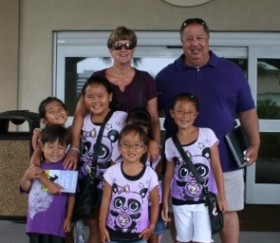 Are boys easier to raise than girls? Sarah S. wasn’t sure, but when she and her husband, John, decided to adopt again from China, they chose a boy. The S. family already included four daughters, all adopted from China. After almost a month of discussion with Agape Adoptions and each other, Sarah and John stepped forward to adopt a little boy they named Joel. “John’s friends all assured him that boys were easier to raise than girls,” says Sarah, “especially during the teen years.” Whatever the future held for Sarah and John, they were sure Joel belonged in their family.

Sarah describes Joel Minyuan as a smart, kind, musically inclined little man. Joel had been diagnosed with Intestinal Lymphangectasia, and when he first came home he walked very slowly, an adjustment for his fast-moving, fun-loving family. Joel was six years old when he entered the S. family, having been abandoned at age three; and Sarah worried that he would have trouble attaching to his new family. As time passed and Joel settled into his new life, Sarah’s worries melted away as she saw Joel develop deep connections with his family and gain a new lightness in his step as his own fears began to subside. Soon, Joel was teasing his sisters and chasing them too!

Today, Joel fits so well into his family that it’s hard to think of a time when he wasn’t with them. A good-natured boy, Joel loves to play with and bother his sisters; and he enjoys basking in the glow of being a “mama’s boy.” Has Joel been easier to raise than his sisters? Sarah says, “Everyone really ought to have several girls and boys – then they’d see!” For the S. family, raising a boy is simply a different kind of wonderful.

What our clients say: "I researched adoption options and agencies for nine months before we selected Agape Adoptions. Looking back, I can truly say that I had a wonderful experience with Agape.  The communication was great.  I loved that they handled all of the details for us.  I always knew what was coming next and how long to expect to wait through each st...