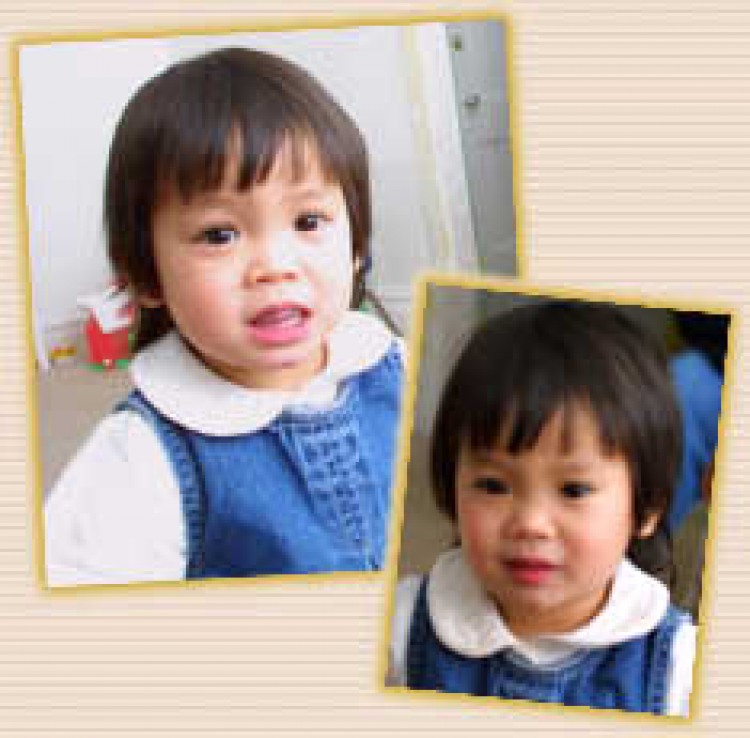 Sitting in the back seat of the family van, 4-year-old Lien Fleming plays with her frilly white socks and drops a bomb-shell: "My parents are probably dead." Margaret Fleming, her adoptive mother, doesn't flinch. She's accustomed to somber words from her daughter, abandoned at birth by her HIV-positive mother. Fleming, 69, adopted Lien in 2002 after seeing her picture in an adoption newsletter. The caption? "Baby in AIDS

ward, Ho Chi Minh City." Those words frightened away some, but not Fleming. While waiting to finalize the adoption, she received a fax from Lien's doctor. The baby had "seroconverted" to negative. Lien was a healthy little girl.

Infants with positive mothers carry their mother's HIV antibodies, which are harmless, for up to 18 months. At that point, a child is said to seroconvert if the antibodies dissipate. New antibodies, however, signal that the child has contracted HIV and is producing his own antibodies. "We can't tell the difference" until then, says Dr. Jane Aronson, an adoption-medicine specialist.

As an adoptive mother of seven kids and founder of Adoption-Link, a Chicago agency that works with African-American birthmothers, Fleming has a suitcase of stories to tell about finding homes for hard-to-place children. "I've never turned an infant down, and once I had a baby born with no arms or legs," she says. She found him a home in 13 minutes. Having placed 700 children since 1991, Fleming is now tackling an even greater challenge: finding U.S. families for HIV-positive children born overseas. For those who will never seroconvert (and will have HIV forever), it is a matter of life or death. "We can give them the drugs they need to live long lives," she says.

After sending three kids to college and earning a master's degree in social work, Fleming, a divorced mom, debated what to do next. "I thought I'd either get a Ph.D. or adopt a child who needs me," she says. Even then, she defied convention, requesting a black infant—rare for a white single parent in 1981. Fleming, then 45, was able to adopt Nathan, the son of a Russian teen and an African-American father.

Fleming's 2002 visit to Lien's AIDS orphanage—with its "acres and acres of children"—compelled her to found Chances by Choice, the nation's only nonprofit foundation devoted to international HIV adoptions, in 2003. The organization acts as liaison between source agencies that identify children with HIV abroad and families in the United States looking to adopt. So far, 27 kids in Asia, Africa and Central America have received approval from their governments to be adopted; four have come to the United States and 12 more are completing the process. Some countries are balky about international adoptions. "There is such a stigma [about AIDS] that some governments won't admit they have a problem with HIV-positive children," says Candice Morgan, a social worker at Chances by Choice.

Testing positive at birth is not necessarily a death sentence—a fact unknown to Fleming in 1997 when she adopted her first HIV-positive child, Malik. "There was a real fear he might not make it. I didn't know who was going to outlive who," Fleming, who was 61 at the time, recalls. She proceeded with the adoption, partly because her brother had been living with HIV for 17 years. A year later, Malik seroconverted to negative.

Fleming's youngest, 9-month-old Luca, will never seroconvert: he is already replicating the HIV virus. Prospective parents worry that a sick infant poses risks to themselves and their family, a thought that even crosses Fleming's mind. Three weeks ago, when Luca cut his cheek, Fleming donned rubber gloves, cleaned the wound and wondered if the family should get tested. "Intellectually you know he's not that contagious," she says, "but your emotional intelligence is something else."

When her eighth adopted child, an HIV-positive 2-year-old from overseas, comes home later this year, Fleming will be 70. "I always say I'm through, that it's getting a little ludicrous," she says. Some friends label Fleming a saint while others call her crazy for adopting this late in life. But Fleming doesn't worry. "I don't think I'm either, really. I just think raising kids is what I do." And for that she has earned a title she can live with: Mom.

Chances by Choice has HIV Positive children waiting for adoption. Visit them online at: