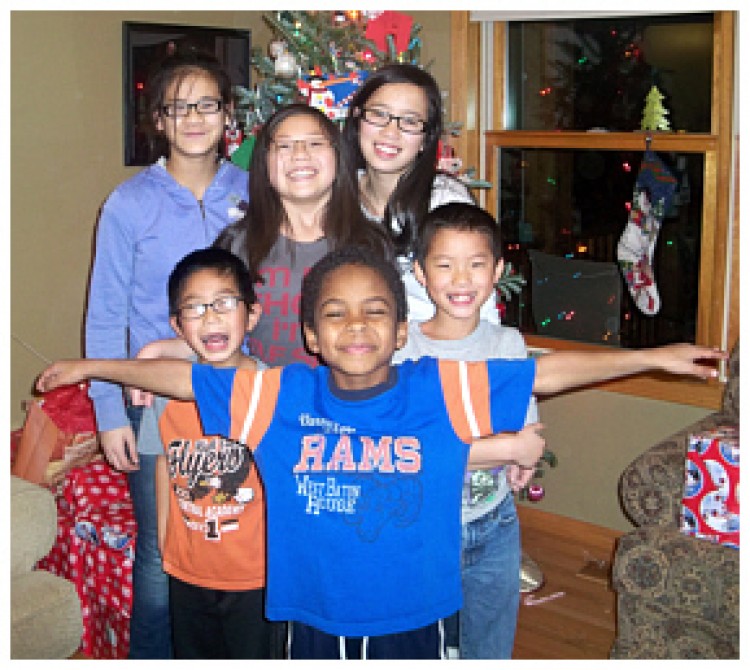 Our story began when Pat and I married in 1996 bringing together two families.  Pat (age 44) was a widower with 2 young children (daughter 8 and son 10) and I (age 47) was a single mom to a 14 year old son.  About three years into the marriage Pat listened to a radio program about all the girls abandoned in China and was touched by it.  He came home from work and said, "Maybe we should adopt a baby girl from China."  I thought he might be a little crazy but agreed to research the idea.

Following a period of online research, I reported that it was "too expensive and I am too old".  But God had a different idea and He redirected our steps over the next several months so that we embarked on the journey of adoption from China. Like many families who wish to adopt a child, we requested a healthy baby girl as young as possible.  We traveled to China in February, 2001 and brought home our first daughter, Zoe, at the age of 16 months.  (If you are doing the math, I was 52 and Pat was 49).

We then thought it would be good to adopt a sister because our older kids would be grown and out of the house within a few years.  I discovered the Rainbowkids.com website and found a 3-year-old girl with a missing eye who just looked like she needed parents.  Pat agreed and we pursued that adoption and brought Lydia home in July of 2003.  We celebrated my 55th birthday in China and Lydia was my present.  What a joy!

Shortly after we arrived home with Lydia, I told Pat, "I think we have another daughter in China and her name is Anna."  This time Pat began to think I was a little crazy.  We had to wait a year before we could apply again.  So in July of 2004 I found another 3 year old girl who had Hepatitis B on Rainbowkids.com.  She looked like she needed parents too.  At this point Pat said, "I'm not opposed."  So I proceeded to work with the adoption agency to get a pre-approval waiver on the age requirement that China had.  We were past the age of 55 set by China.  We filed all the paperwork and received necessary approvals.  This time my birth son, Nick, traveled with me to bring Anna (age 3) home in January of 2005.

Adoption got into our hearts.  We saw our girls blossoming simply because they had a family. We watched each of them grow in their attachment to us and us to them.  We began to see the gifts and talents placed in them and felt honored that God would entrust us with these precious children.   Not saying this is an easy road, but it is a rewarding one.

We decided to look for a boy from China.  I found a 3 year old boy with Hepatitis B on Rainbowkids.com who looked like he needed a family too.  We were well beyond the age limit at this time but filed for an age waiver again.  China came back and told us "no".

So, we proceeded to work on adopting a 15 month old African American boy from the MN foster care system who had a diagnosis of fetal alcohol syndrome that we had met through our church.  After we had been approved to pursue a "foster to adopt" situation with our son Jesse, and were bringing him into our home as a foster child, China came back to us and asked if we might still be interested in adopting the little boy with Hepatitis B. (Very unusual behavior from the China Center for Adoption Affairs so we figured God might be involved in this.)   Our thinking was that 2 boys would be better than one because they could be playmates.  So we brought Jesse into our home as a foster child in September, 2007 and proceeded with paperwork to adopt Jack (age 3) from China.   Bunny, Nick and Zoe traveled to China in July of 2008 to bring Jack (age 3) home.  I celebrated birthday #60 in China adopting our fourth child from China.  What a great birthday gift!

At this point we figured most people thought both of us either were very crazy or that God had called us to adopt children.  Here we were, a couple of geezers (ages 57 and 60) heading into retirement and adopting all these kids.  We knew that God's heart was for these orphans to have families.  Adoption just got into us.  The Bible says that children are a heritage of the Lord and blessed is the man whose quiver is full of them.  We thought our quiver was full and certainly we were pressed to keep some semblance of balance in our home.  People who have adopted understand that it can be very difficult on a daily basis helping children who come from the hard places ours came from.  They don't always behave like 'normal' children because they have had so many traumas in their young lives.  They don't need all the latest toys, or private rooms, or the best clothes. The kids just need parents who will be there for them and will help them learn how to live.

Six months after we brought Jack home, I felt a leading by the Holy Spirit that we were to adopt another little boy and his name was to be Gabriel.  I noted that in my prayer journal and tucked it away for about 6 more months until I felt I could mention it to Pat.  The adjustment for Jack had been particularly difficult and we were both weary and had significant debt from previous adoptions.  When I showed Pat the notation about another
little boy, he said, "I would need a sign from God."  A month or so later he received a $10,000 Christmas bonus from his employer.  You must know that he is not in the kind of job in which that happens.  It happened that year, never before and not since.  He took it as the sign he needed and I started to look for Gabriel.

I found him on Rainbowkids.com: a little 4 year old boy who was born with some fingers and toes missing. Similarly to our other children, he had been abandoned at birth.  We applied for an age waiver again and were given pre-approval.  We finished the dossier and in December, 2010, I traveled with Zoe and Anna to bring Gabriel home.

We do think we may be done adopting but are open to what God would have us do.  As of this writing I am about to celebrate my 65th birthday and Pat just turned 62.  Traditional retirement isn't something we look forward to.  We feel blessed to have meaning and purpose in our "golden years".  On top of that we get relationships with some wonderful kids.  Again, I will say it is not an easy thing we do because of the struggles our kids have had, but we get to be a part of helping them have a fulfilling life.

We are told in Scripture that religion that God considers pure is to care for widows and orphans.   In the Old Testament we find that in 30 or more places God told Israel to care for widows and orphans, to help those who are helpless.  It must be pretty important to Him!  If my heart for orphans is even a tiny bit of what God's heart is, I believe He aches for homes for these precious children.

Pat sometimes threatens to disconnect my internet because I keep finding kids who need homes.  He brought home a sign one day that said, "I keep child proofing my home, but somehow they keep getting in"  We laugh a lot about things.  I could talk for hours about our kids and just how much they have grown and all the trials and funny things that have happened.  I am often told I should write a book.

Personally, I wish we had more room in our house because I see the road of adoption to be such an amazing journey.  Our three girls share one bedroom and the boys share another.  We all learn to share and help out. Yes, we do get tired.  Yes, sometimes it is overwhelming. We don't have all the energy we had when we were younger but then we parent differently at this stage in our lives. We don't spend on luxury items or vacations.  We just take one day at a time and lean heavily on God's grace each day.  I have learned to see the little changes that happen so gradually in the lives of our kids.  When I think back on my feelings before we started this journey: I was too old and it was too expensive, I am only thankful that God kept on me and that I said yes.  I wouldn't change my life except maybe to have a bigger house so we could bring a few more kids home to a family.

Thanks for listening.
Pat and Bunny Suiter

Adopting: From Vietnam to Haiti

Before and After Adoption