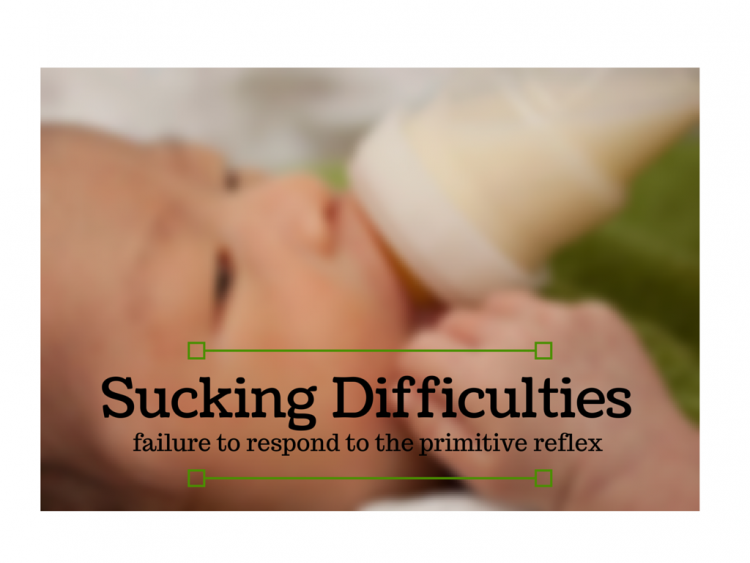 The suck reflex is one of the first and most primitive responses that an infant has to oral stimulation. When the lips or cheek are tickled, the muscles coordinate to form a suck response so that the child can suck and coordinate the muscles needed to ingest milk.

The reflex to suck forms sometime in the 6-8th month of gestation (pregnancy). The ability to coordinate the suck and swallow (to be able to ingest milk) forms approximately in the last 2 months before a full term birth. Babies born prematurely, that don’t have the last few months to develop before birth, may not have this reflex and may need help to feed until the reflex develops. This help may include a tube from the nose into the stomach to deliver milk. It can take weeks for a premature infant to gain the endurance to take all feeds by themselves. Premature infants are usually close to their expected due date by the time they figure out how to suck and swallow on their own.

While premature infants may have a reason for poor sucking reflexes, in full term children and older infants, the reflex should be present. Even in children with spinal cord injuries, the sucking reflex is typically preserved.1 Thus, since this reflex is present even in the face of neurological injury, in full term children with sucking problems, this could indicate larger, significant neurological problems. Studies have shown that infants with poor or absent suck reflex usually have moderate or significant perinatal hypoxic ischemic encephalopathy (lack of oxygen around the time of birth).2 Please note that true hypoxic ischemic encephalopathy is defined as US standards and is much different than the terms used indiscriminately in many Eastern European referrals. Multiple congenital syndromes are associated with poor suck reflex usually noted shortly after birth.

For Someone Very Special: Hold On