You Belong: From Hosting to Adoption 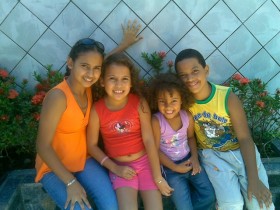 What it is Like to Adopt a Large Sibling Set

Below is an interview with a mom of four adopted siblings. The family has been gracious in allowing Hand In Hand an interview and we respect their desire for anonymity.

We adopted 4 siblings whose ages ranged from 11 up to 15 years old.

What are the main advantages to adopting a large sibling set?

The main advantages we found in adopting a large sibling set was the familiarity and support of one another's habits and personalities consequently less adjustment was needed for them, they had a greater security (example, if one child was too shy to ask for something; another would ask for him or her); it is easier to focus on being a family rather than immediately needing to find new friends as they had each other to interact with (along with our other children).

What were some of the challenges of adopting a large sibling set?

Some of our expected challenges were logistics, such as preparing meals for a larger family; establishing routines for keeping the household in some kind of order; and providing for many needs (i.e., clothing, toiletries, etc.) in a very short amount of time. Some unexpected difficulties were high expectations for material wants; difficulty communicating as they can easily 'hide' in their native tongue; settling them down from a large, busy institutional atmosphere into family setting; and general culture shock. The children would, at times, just get exhausted from being around people, especially when it was outside our home. The culture shock, their limited English abilities, and their personalities contributed to this. We tried to manage how often we interacted with others and gave them plenty of quiet time to recover afterwards. Some of the children were overwhelmed by going to stores, impulsively asking for lots of things. We tried to limit and manage shopping trips, even for groceries. We also gave them a quarterly clothing allowance once we had supplied them with their basic needs (which worked very well for all of us, and taught them some important life skills). We also gave them a small monthly spending allowance.

How did you deal with individual attachment?

Depending on the child, this is still an ongoing effort. It has taken a great deal of patience, especially as a couple of the children we adopted were already quite independent and sometimes hesitant about having a family. Two of the children were rather easily accepting of being in a new family, so attachment has been an easier process, just by taking time to do an activity or just spending a few minutes visiting with each other throughout the day; the other two are more independent- minded and somewhat less 'pliable' regarding bonding. These two also like doing social activities, so one-on-one time while driving to and from activities is helpful. We also homeschool, so are involved with the children in their studies.

What are the errors to avoid?

Don't expect the children to fit your expectations. These children understandably have missing pieces in their formation and will have big hurdles to cross as they become accustomed to your family experiences. Don't take their words of hurt and frustration personally, and be prepared to 'ride them out', as they are often speaking out of fear and hurt, and not what they truly feel. Don't confuse giving them things as a way to show your love. It is certainly necessary and good to give them what they need, and sometimes what they want, but it is important to also find other ways to fill their needs: i.e., spending time together, being consistent in some routines so they learn to trust you, giving them time alone, etc.

Do you have any advice?

If you truly feel called to adopt a larger sibling group, be prepared for a very busy life ahead. The rewards can be great for them and for you, but be sure you are ready to put in some hard work, especially at first.

Put your marriage first. You will need the help and support of one another more than ever before, and need to be ready to handle it together. Your children will benefit from being with parents who are happy together and in agreement on how to handle situations. It will also reduce many of the discipline problems you might otherwise encounter, just because you are a stronger force to be reckoned with. 'New' children will catch on quickly who they can ask to get what they want and they may be less concerned about dividing you because they aren't yet emotionally dependent on you. They may also have learned to do this in an orphanage setting, with various adults as their caretakers.

If there is an opportunity to participate in a host program with the children before bringing them home permanently, we recommend it. We did have this opportunity, and they spent a month with us. We had already committed to adopting them (although that wasn't a requirement), but we used that time to get to know one another and help the siblings get adjusted before coming back to stay. We did have to pay for the airfare, so it was an additional cost, but well worth it to us, and for the children.

Finally, practice being very patient and try to see the bigger picture. It can be very easy for parents to fall into the habit of micro-managing the children to correct all of their behaviors at once. This can be exhausting and can easily frustrate the children who need your trust and understanding. Just focus on one or two behaviors at a time and teach them what you expect. Older children will also be learning life skills so let them do more things 'their way' rather than the way you think is best (i.e., in cooking, organizing, chores, doing schoolwork, playing games, etc.). Maybe they will make mistakes, but better now than bigger ones later, and maybe their way is actually very good! Pray, pray, pray! Let your faith be the glue that holds you all together and trust that He will provide for all needs.

Click on the image below to view the over 900 children who are part of sibling groups waiting for their forever family!