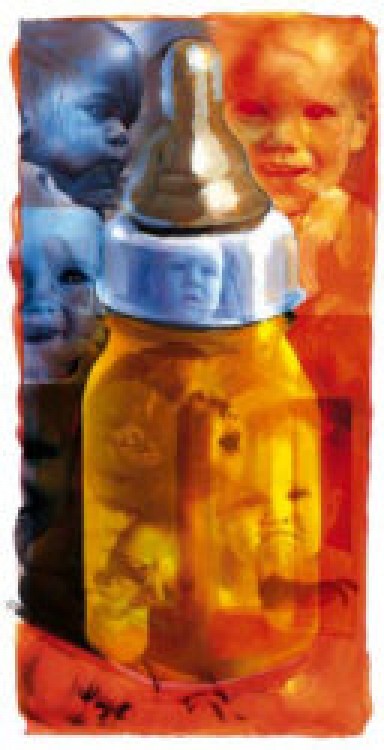 The topic of what formula to use when breast milk is not an option generates a lot of smoke and heat, and is one of our more frequently-asked-questions ... so here it comes, folks, 2 level scoops of science mixed with 4 ounces of opinion.

I usually recommend a cow-milk-based formula at first. "But aren't all (insert-ethnicity-here) children lactose intolerant?" Actually, inborn lactose intolerance is extremely rare. Since lactose is the main sugar in breast milk, infants are born with the enzymes to digest it. While lactose intolerance may show up earlier in non-Caucasian children, you probably have at least 1-2 years of good ability to digest lactose. Also, an internationally adopted child has most likely already been receiving a cow-milk-based product, quite possibly sweeter, more dilute, and less nutritious than Western formulas. If you really really want to avoid lactose, and stay with a cow milk formula, there are lactose-free formulas, but they swap in corn syrup for the lactose.

Soy formulas are also an option, but in my mind you should have a compelling reason to switch. The longterm effects of a mostly soy-formula diet are not well-described; in the decades they've been in use, we've not seen obvious hormonal impacts from soy's phytoestrogens, and one retrospective study seemed reassuring, but we can't know that there aren't subtle effects. Also, certain minerals may not be as well absorbed from soy products, and children can get constipated on soy formula, neither of which is what you want in the first few weeks. I'm not at all anti-soy, and do feel that cow milk itself is overrated as a nutritional source ... but for infants I need a good reason to go with soy.

For toddlers, where the soy is just part of a healthy diet, and lactose intolerance is a more real possibility, a soy formula would be fine. I do recommend organic brands when it comes to soy products - too much genetically modified "Frankensoy" out there getting doused in Roundup and other pesticides.

You won't see goat milk on my list of recommended formulas. Goat milk is well and good as a substitute for cow milk, but I've just seen a few too many infants starving on goat milk formulas. Perhaps it's that "make-your-own-formula" isn't the safest way to go, perhaps it's that people don't realize that truly cow-milk-allergic infants are also likely to be allergic to goat milk (and soy) ...

I also never recommend a low-iron formula, but luckily they're hard to find. Adequate iron is essential for cognitive development, and international adoptees are frequently iron-deficient.

As for DHA/ARA , which are omega fatty acids present at varying levels in breast milk that are felt to help brain and eye development, I will say that they make good theoretical sense, but the research outcomes have been more mixed than the advertising would have you believe. For international adoptees, there is no research on this topic, but it would make sense that they'd be deficient in omega fatty acids, so I do have a soft preference for formulas with DHA/ARA.

I do recommend that newly adopted infants and young toddlers stay with formula as their drink of choice for about 2-3 months post adoption, and certainly to at least 1 year of age. It's just much more nutritionally dense than milk, juice, etc. Since many adoptees have micronutrient deficiencies (vitamins, mineral, iron), the formula can help. As for "toddler formulas" , it's a trade-off: on the good side, they've got more calcium and phosphorus, on the bad side, the sugars are typically from corn syrup (unless you're convinced your child is lactose intolerant, then it's good). Confused yet?

Many parents choose to continue using the familiar local formula when travelling , which makes sense in terms of minimizing transitions. You can gradually switch to a US formula when you get home. However, I do think it's a good idea to bring some US formula too, in case you run out, or for children who don't seem too picky about such things. For children getting rice cereal in their bottle, I would wean that too when you get home. Rice cereal is for eating, not drinking, and it won't "fill them up for sleep" (sadly).

If you child is refusing formula during your travels, please see our topic on Transitional Feeding Difficulties for some ideas.

When it comes to specific brands, it's more about your philosophy and pocketbook, and your child's digestion, and less about science.