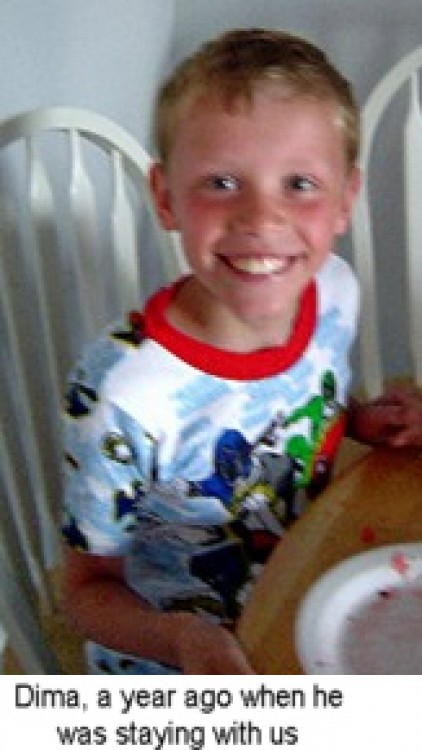 Last summer, RainbowKids.com readers joined our family in a wonderful journey of hosting a child from Russia.

Daily I posted the ups and downs, the realities of hosting a child you know you will not adopt, but wish to advocate for. It was an exciting adventure, shared by the other 7 families in Louisiana that were also hosting a child. During that time, I made incredible lasting friendships with these families as we bonded over our shared experiences.

Just prior to hosting the kids, we found ourselves short one hosting family, and I asked my very best friend, Lisette Daigle, if she would be willing to host a little boy. They have only one child, a daughter who was 10 at the time. She and her husband agreed to be a "host-only' family, as long as it was clear they were really not interested in expanding their family.

The first is that Lisette, Mark and Claire Daigle found out that the heart has a mind of its own&.and that they didn't just want this little boy---they needed him as much as he needed them.

The second was that every one of the children who were hosted, found a family that wanted to adopt them.

And the third was that a terrible hurricane named Katrina attacked Louisiana and drowned our city. This happened after our host children had left, and fortunately only four host families lived in or near New Orleans.

We all managed to get out on time&but of the four families (we were one), only my family's home, though damaged, did not require rebuilding or major work. Lisette and I live near each other, and our homes were not flooded&but a category 5 hurricane has enough wind to do its own kind of damage.

Karen Fontana and her daughter, Katya, hosted a wonderful little girl, Anya. They already had their paperwork filed in Russia to adopt Anya when the hurricane hit, flooding and destroying their home, work and school..and taking the lives of their pets as well. It was devastating then and even writing about it now has brought tears.

Kent and Leslie Kozina had completely fallen in love with their host child, as well. Their home met with the same fate as the Fontana's, washed away in the anger of Katrina. In the midst of the terrible destruction, the families frantically emailed each other (the Daigle's and our family lived together in North Louisiana for 5 weeks)&their homes, their city even&destroyed. How would they recover? Where would the live and work and how in the world could they now afford to adopt the children they had come to love and think of as their sons and daughters?

And then came the RainbowKids.com Readers.

I told our readers about the Daigles, Fontanas and Kozinas. You poured out our love in emails, and many of you contributed to a fund to help these families be united with their children. Today I want to share with you what the last year has brought for these three families.

At first, each family was told the harsh reality: Russia could not see placing these children with families who had no clear picture of their own future. To lose your home and job, to see your city fall apart is one thing&but to then find out that the child you hold in your heart as your own will never be yours&well, that can just bring a person down about as far as they can go. At least, that's what I thought.

But an interesting thing happened to these three families when they were given the news. They decided Nyet in Russia didn't mean No&it simply meant, "You're going to have to work really, really hard to convince us. And they did.

Karen Fontana, after weeks of looking, found an apartment for her daughter and herself. She tracked down the CIS office for Louisiana&it was now hiding in Kentucky. She showed up for work anywhere her office happened to be located that day, and was the first person I knew to order a house made using modules. I think as a lawyer, Karen believes that an answer of "no' simply means she has not asked the question in the right way or you were not paying enough attention to her reasons why she needs a "yes'.

The Daigles rented a home in our same neighborhood. They continued to send cards and short notes to Nikita in Russia&but could not promise that they would be coming soon. As the months wore on and more and more paperwork was demanded, the adoption, along with rebuilding their lives, seemed sometimes impossible. But never once did they give up. They had a son waiting and hoping to come home&to any home as long as he had his new mama and papa.

The Kozinas were able to jump back into their careers and found a new place to live. They knew that their hoped-for son had a sister, and they continued to ask the adoption agency if they could adopt both their host-child and his sister. They received news that the child had been moved to another orphanage, and it appeared there were more siblings. While in the midst of digesting all of this news, months after the hurricane, their agency contacted them with bitter information: A judge had decided that it was not in their host-child's best interest to be adopted. He should remain in Russia with his siblings, some of whom were now too old by law to be adopted.

Though heartbroken, the Kozinas (we love you guys!) have decided that there is a child out there for them and they are moving forward at this time to adopt a little girl from Russia.

Due to the generosity of the RainbowKids readers, almost $16,000 was raised to help bring these wonderful children home. Every penny has gone towards the adoption expenses. All of the families have asked me to express their extreme gratitude&you all made it possible to see light during a very dark time.

Karen and Katya Fontana would like to introduce the newest member of their family: Anya Fontana. Anya finally came home in May of this year. She has spent the summer adjusting to her new home and has just started school. Anya and Katya have a new baby kitten, and a new house as well! Karen is a happy, exhausted mother of two active, giggly little girls. She is also an inspiration to all of us. Way to go, Karen!

The Daigle's, who had just begun their paperwork to adopt Nikita when the hurricane hit, are now back in their home. They fought an uphill battle with the US bureaucracy (CIS was not very touch-feely about hurricane victims adopting), and worked very hard to convince the Russian government that a silly little thing like a storm was no reason to reject their application to adopt.

After months of paperwork, the Daigle's were finally allowed to make their first trip to Russian in May. The family of three, along with 4 other adults, waited in tiny room the size of a bathroom in the orphanage to see their son. When Nikita was brought in, he stared into the faces of each adult, finally seeing Lisette squished into a corner. Crying "Mama! Mama!' he flew over everyone and was in her arms in an instant. They had a wonderful 5 days together before the Daigle's had to fly back home to wait for an appointment to finalize the adoption in Russia. Though it has been a long, difficult, journey, the Daigle's have been informed that the little boy they fell in love with over a year ago will finally become their legal son in October.

And what about our host-child, sweet Dima? While he was with us, he met the family he was always meant to have. The Bordelons live near Lafayette, LA outside of Katrina's path. Their adoption went much smoother and they brought home the wonderful Dima in June. Dima is their first child after many years of marriage. They feel blessed beyond measure, and Dima has a host of cousins and a loving grandma that live near him.

I wish that I could end the story there&.the Daigle's waiting to bring home Nikita, the Kozina's waiting for another child to come into their lives. Unfortunately, life does sometimes have other plans.

While all the hosted children found families, one family decided not to move forward with the adoption. None of us know why, but because they did go on to adopt a toddler from another country, I suspect the family decided that they wanted a younger child. Because this family stated very strongly they were adopting Yuri, their host child, none of us advocated for him or tried to find him a family&we thought he had a family. Now Yuri is back in his orphanage in Russia, with no prospect of another adoptive family.

For anyone considering an older boy, there are many of us who can tell you about Yuri (see photo below), who is 8 years old. Yuri has some hearing impairment, but is not deaf. He is funny, loves to laugh, is a typical boy, and very sweet. He likes hugs, animals, and playing outside. Please contact Nightlight Adoptions

To our wonderful readers, thank you.