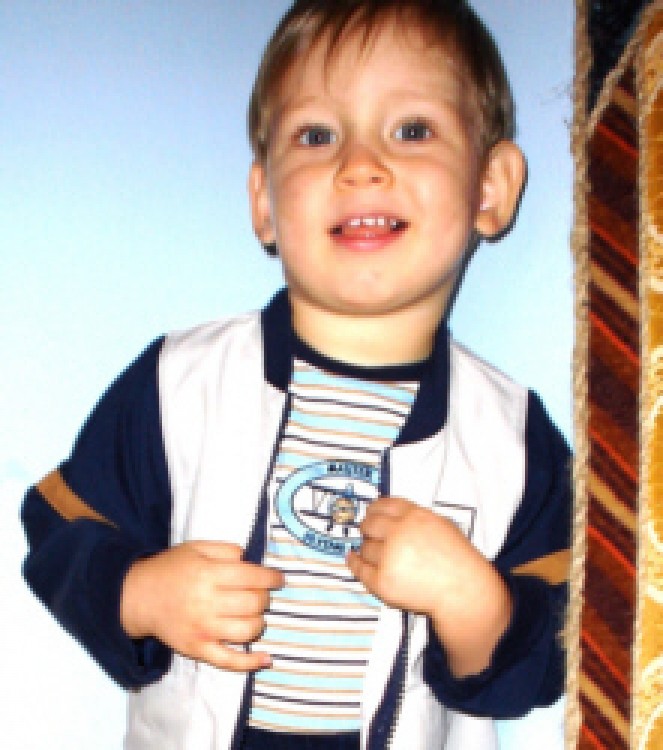 In August of 2005, we made our dream a reality. We ended the difficult process of adoption and bought home little Nomar Alexey.

We met Alexey in October 2004, when he was eight months old. From the photo of the referral I felt that this was our son.


He was a handsome little boy, healthy, very active and aware of what was happening around him. We fell in love with him the very moment we met him. When we visited Alexey again in December, then ten months old, we discovered that he was already walking and drinking in cups. We were very anxious to have him home with us. The waiting period was agony.

We got our court date in August and traveled to get our son who was now 18 months old. When we saw him for the first time after eight months we were gladly surprised to see that he didn't feel estranged. Once he realized that he had seen us before, he came to us with ease like we were always with him. He was happy to see us every time we went to visit him.

I had concerns about Alexey's adjustment to a totally new environment. We have to admit that this child has amazed us. Since the first night with us in Kursk , it is like he has been with us all his life. He has adjusted very well to his new surroundings and people. He is definitately a well-adjusted child- emotionally balanced, very intelligent and curious. They had told us that he had a speech delay and gave us a list of food he couldn't eat. Let me tell you this little guy has a healthy appetite and eats everything you place in front of him. He is starting to say his words in Spanish and understands very well.

I remember the court day where we were given a little bit of hard time insisting he was sick or could be mentally sick because of his birth-mothers' illness, where the judge even suggested to give us additional time to think

it over. I told my husband that I wish they could see him; how good he's developing and I wonder if they knew what they were talking about when I look at this vivacious little boy running around the house. Up to this day he hasn't gotten sick, not even a cold! Thank God!!

In Puerto Rico , Nomar Alexey's arrival was highly anticipated by family and friends. He's proud Daddy did a great job talking about his son to everyone he knew. Nomar received two welcome parties: one from his dad's office and one from our friends. He is well known in the neighborhood and people ask about him if they see us without him. Everywhere I go with Nomar, he is subject to admiration and receives blessings from strangers. We believe we've been totally lucky and blessed by the Lord with this child who loves animals, is friendly, is always happy and has a wonderful smile and laugh. It is our hope and wish to one day thank his

biological mother in person for the wonderful son she gave us.

While we were waiting for a court date, we had been in contact with the Honorary Consul of the Russian Federation in Puerto Rico , Anastasia Kitsul. As we got acquainted, we shared with her our interest for Nomar to maintain contact with his native Russia . In the brainstorming, we came up with the idea to start a foundation where all adopted Russian children brought to Puerto Rico could learn the language and culture of Russia as well as Spanish. Our foundation would also share Puerto Rican culture with Russian families who move here. We named our organization “Fundación Ruso-riqueña Pro Educación” (Russia-rican Pro Education Foundation).

The first formal meeting took place on January 7, 2005 , in an area of San Juan where the Russia-rican Pro-Education Foundation was launched along with the Russian community in Puerto Rico .

Gathered together the group met in a Russian style Christmas party with personalities like “Ded Moroz” (Grandfather Frost) and “Snegurochka” (Snow White). The foundation intends to be a cultural link between Russia and Puerto Rico for families with Russian children. The foundation's philosophy is based in the necessity of the children to learn about their roots so they can define their own identity. Another objective of the organization is to provide information and support to the families

Recently, the Russian language class started for the adults with a Russian professor whom gives classes of Russian and German languages in the University of Puerto Rico .

For the families in Puerto Rico interested in being part of the foundation, we can be contacted through the following emails:

We are very grateful to Commonwealth Adoptions International , especially our Case Manager Traci Good for her help, guidance, patience and care. We

would also like to thank the orphanage where Nomar was taken care of in his first 18 months. They did a great job caring for him and we hope to go back

to get our daughter in Kursk as well.