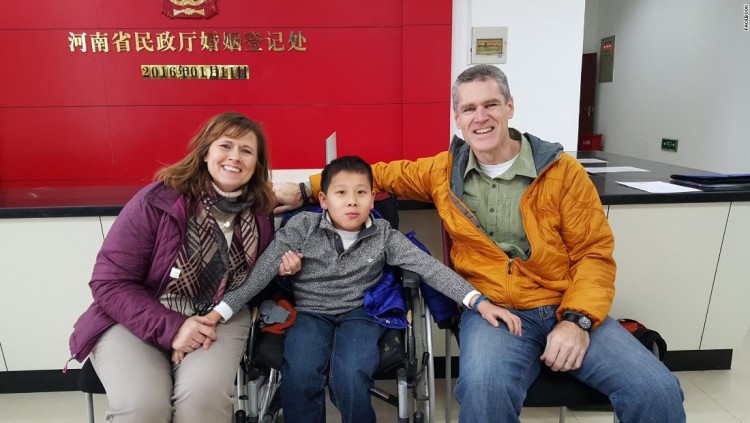 Brian and Jeri Wilson didn’t sleep much on the 17-hour flight from Kansas City to Beijing. JiaJia, the Chinese orphan waiting for them, can’t sleep either. As the Wilsons traveled from their home in the American Midwest to northern China, JiaJia (pronounced “Jah Jah”) lay wide awake in the small room he shares with eight other orphans. He is the oldest child at Alenah’s Home, Children’s Hope International’s medical foster home in the Chinese capital where he has lived for most of his nine years.

JiaJia has never met in person the two Americans who already call him their son. He’s never met his three older sisters or grandparents. They’ve only seen each other in Facebook photos and a few Skype video chats with a translator. Neither adults nor child know if they’ll be able to communicate, given they don’t speak the same language. “He’s leaving everybody, everything that he’s known and been comfortable with for nine years,” mom Jeri Wilson says. “And put into a family that doesn’t look like him and doesn’t talk like him. Doesn’t do anything like him.”

At the first meeting, everyone was nervous. A foster home worker greeted the Wilsons at the airport terminal, along with two other adoptive parents, and escorted them to a waiting bus.”He’s a rock star,” dad Brian Wilson beamed as he talked about his son on the 20-minute ride to the foster home. The volunteer said she remembers when JiaJia was a tiny baby. He was just three-months old in 2006, when his birth parents left him outside a fertility clinic in Xinyang, in central China’s Henan Province.

The clinic sits in the heart of what’s considered a “small” Chinese city, of about six million people. Cars and bikes whiz by as nearby street vendors sell kabobs, cell phones, and clothing. Outside the clinic’s front entrance, a small wall is lined with photos. Smiling parents hold newborns the clinic has helped bring into the world. JiaJia was found on the front steps. Jeri believes JiaJia’s mother did not abandon him, but saved him. “Who goes to a fertility clinic except people who want children? So his birth mother left him there in hopes of somebody taking him home,” Jeri says fighting back tears. “To me that showed that she loved him. She put him somewhere that he would be found and cared for. I pray for her. And I thank God for her. And I want him to know that she loved him.”

It’s heartbreaking to imagine what JiaJia’s birth parents must have gone through. The newborn had spina bifida, a spinal birth defect. His surgery would’ve cost the average Chinese worker up to two years salary. The world’s second largest economy, with a population of 1.3 billion, still lacks an adequate social safety net despite its massive wealth. Many parents whose children are born with a disability simply can’t afford medical care. The number of abandoned children in China has dropped steadily in the last decade, but the numbers remain disturbingly high. Today, almost all of China’s unwanted children have disabilities. Dozens of new cases of abandoned children are reported each day.

For JiaJia, time was running out. Chinese law says kids can no longer be adopted once they turn 14. Many who “age out” become permanent wards of the state, spending much of their lives at institutions. Much of China is not accessible for people with disabilities, as the Wilsons discovered while trying to push JiaJia’s wheelchair while sightseeing.

According to Chinese authorities, there were more than 525,000 orphans in China in 2014, though child welfare groups believe the number could be much higher if you account for children in non-government orphanages and foster hones like Alenah’s Home.

Convincing families to adopt special needs children like JiaJia is a tremendously difficult task, says volunteer and former orphan Olivia Raney. “Kids with the most severe special needs are an enigma,” Raney says. “They have the highest need for round-the-clock care, yet the lowest chance of finding forever families.”

JiaJia’s botched spina bifida surgery left him paralyzed from the waist down. Still, he’s learned to swim, attends school when he can, and dutifully changes his own diapers. JiaJia dreams of someday becoming a police officer. He already has appointments scheduled with doctors in America. The Wilsons expect JiaJia will need multiple surgeries. “We’ll get him fixed up as best we can,” Brian says. A Chinese family promised to adopt JiaJia but backed out, overwhelmed by the seemingly endless paperwork and daunting burden of caring for a child who may be forever confined to a wheelchair.

High school sweethearts who just turned 50, Brian and Jeri have three grown children. Both work full time. Brian is a contractor and Jeri a pharmacy tech at a local grocery store.

They epitomize the American middle class, with a simple home in a small suburb of Kansas City, Missouri. Devout Christians, they go to church every Sunday. They learned about JiaJia through fellow church members who adopted his best friend from the same foster home. The boys will soon be reunited. Their families live near each other in Missouri.

After months of prayer, the Wilsons felt God had called upon them to adopt JiaJia, all the while knowing what a drastic life change it would be to care for a child confined to a wheelchair.

“He was my son. I could feel in my heart that he was my son,” Jeri recalls. Once they decided to move forward with the adoption, the family faced a major obstacle. They didn’t have the $36,000 in adoption fees required to bring JiaJia home. Church fundraisers helped them to raise a fraction of the money they needed. But it wasn’t nearly enough.

In August, I met JiaJia while shooting a story in Beijing about China’s abandoned children. I was moved by his upbeat attitude and how he cared for the younger children in the foster home. They played, sang, and ate together. They were a family of children without parents. And JiaJia was their big brother.

Despite his outer strength, JiaJia’s pain was evident in his voice as he explained to me why he so desperately wanted a family. “If I have parents, I can live,” he told me. “I can have a life.”

Tears began streaming down his face. In seconds, I was crying too. And so was every member of our crew. We sat together, crying in silence. For a brief moment, we understood JiaJia’s pain.

After his story aired on CNN, donations began pouring in from around the world. The Wilsons quickly set up a Go Fund Me page. In a matter of hours, they had exceeded their goal of $36,000 dollars. Most donations were between $25 and $50. The largest was $2,000. The smallest was $1.

Local news outlets in Kansas City picked up the story and more donations came flooding in. In total, 780 people from the U.S., Spain, Australia, Italy, Brazil, Canada, and China donated nearly $50,000. “God had his hand in this whole thing,” Brian Wilson says, calling the experience “overwhelming.”

The Wilsons continue to maintain their blog, Facebook and Go Fund Me pages and have pledged to donate excess funds to help other families who are trying to adopt Chinese orphans.

“There are so many of them there who need families,” Brian says. Jeri rubs JiaJia’s head. Brian whispers to him. They are his protectors. They will be his parents and love him forever, they tell him. Despite the language barrier, JiaJia seems to understand.

“As hard of a life as he’s had these last nine years. I think he’s getting a sense of how different it’s going to be,” Jeri says. “A lot of spoiling. I’ve got nine years to make up for.” JiaJia begins to smile and laugh. He cracks jokes. He rests his head on his mother and father. He holds their hands. In just a few days, he’s already speaking more English. He has given his parents nicknames, “Big Monkey Dad” and “Big Cat Mom.”

“It feels like we’ve been with him forever,” Brian Wilson says. “We didn’t know if we’d be able to communicate, but the communication has been great.”

Before he left Beijing, the orphanage threw a small party for JiaJia, who was leaving behind the only ‘family’ he’s ever known for a new life, with a new family, in a place vastly different from the world he knows. “I don’t want him to leave,” said nanny Huang Renqun. “But at the same time, I’m happy for him because he finally found a family. A perfect ending.” The younger children at Alenah’s Home look up to JiaJia like a big brother. They shouted his name as a sobbing and emotionally overwhelmed JiaJia was wheeled outside. “Bye bye JiaJia,” several of the younger children shouted, waving as his bus slowly pulled away.

Everyone was crying happy tears. But it doesn’t make saying goodbye any easier. Soon, JiaJia and his parents will make the 6,600-mile journey to Kansas City. Dozens of people will be waiting for him at the airport. JiaJia’s new family, neighbors, and church members plan to gather and welcome him home. “So many people are ready to embrace him, love him, and accept him for who he is,” Jeri says.

“Everybody feels like they know him already,” Brian adds. In addition to his new life, he has also chosen a new, American name: Jason JiaJia Wilson.

I Am Proud to Say I Close Down Orphanages