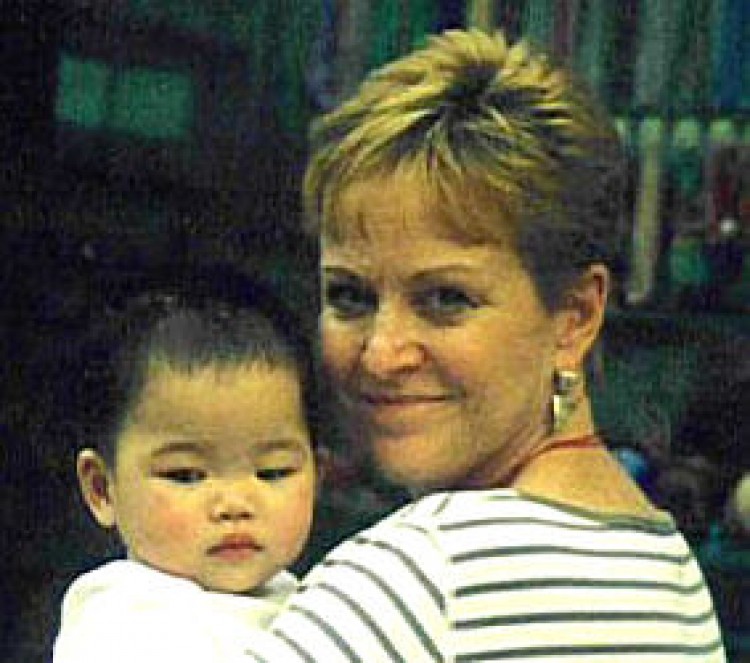 The trip itself is old news.  China is very interesting. We saw Beijing, Guangzhou, Qing Yuan City and Hong Kong. We visited Tienemen Square, the Forbidden City, the Great Wall, many temples, a cloisonné factory, a pearly factory, a jade factory, the jade market, and a kindergarten in Guangzhou with 500 3-6 year olds in attendance. We ate many undefined meals, before finding a guy from New Jersey that delivered Bagels, lasagna, pizza, and pasta. We located McDonalds, Pizza Hut, and Hard Rock Cafe.   OH and as far as the “reason” we went to China.....our introduction to Aimée was very peaceful, not the screaming fest, I’d imagined! She and 5 other babies, all dressed alike, in Gymboree outfits, were handed off to their parents, with only one child upset! Madam Tang and her nannies were very helpful disclosing favorite sleeping positions and sleeping and eating schedules. We got tons of pictures! All the babies, were clean, healthy, and happy.

Aimée
was more beautiful than her picture depicted. Her cheeks and lips full and rosy! She looked at me with curiosity and calm! Having arrived at 2:30pm, we’d been to the grocery store and dinner, when back in the room, played a game of pulling the socks off her feet and she broke into giggles! I knew then, that all was going to be just fine! Day two required 11 families to be stuck in a conference room for 3 hours processing paperwork, not a peep of dismay out of our Aimée.  Madam Tang was in attendance, and when I handed Aimée to her, to hold in her lap, for a photo....Aimée complained and reached for me! Madam Tang responded, “She knows you’re her Mama, she already love you!” It made me feel great! I’d hoped Aimée would bond with me, for fear she’d take to my sister, Susan or friend, Tammy, instead! My wishes were answered tenfold...she’d have nothing to do with either of them for three days. That made going to the bathroom and moving about the hotel room a little difficult. I had to be up and showered before she woke!

Fortunately that was predictable, as she slept well through the nights. Finally on day four, she opened up to the girls. We had a very emotional bus trip to visit the orphanage she’d spent the first year of her life in. We learned she’d been found in a bathroom at a bus station, but too far away to visit. One family did get to visit the sight where their child was found. She had been left at the gates of the old orphanage sight. They bus pulled up to the curb, the family left the bus and with their daughter and our guide, and approached the gate. There was not a dry eye in the bus! Many tears were shed that day. What an awe inspiring sight to have traveled 1.5 hours through the country and city to leave the paved road in a large bus and travel along a dirt road to turn a corner and see the orphanage. It was totally surrounded by a tiled wall, very nicely landscaped and consisting of 4 buildings, housing some 50 babies as well as the elderly. Madam Tang, and the director, as well as other male officials, emerged to greet us. We unloaded the Computer, printer, scanner, and air conditioner, that our donations had afforded. They were received in grand fashion, methodically stacked, donning red banners with Chinese characters on them and a printed list of families that had donated funds to their purchase. The families and officials were posed around and many photos snapped. Quite the big deal! We took other photos on the grounds in the beautiful courtyard and did our business in Madame Tang’s office. We then took her, in the bus, to lunch at a fine hotel, where we dined, took more photos of she and the babies, and were each presented with a small album of some 8-10 photos of our children, with a message printed on the front cover.  One of the guides interpreted it for us, bringing many of us to tears. After lunch, we drove to a point where Madame Tang would exit. She walked up and down the aisle, of the bus, saying her good-byes. More soggy eyes. The tension was only broken when someone noted she made her departure upon the back of a motorcycle!

What a devoted and wonderful woman! We were so fortunate to have had our babies in her care. Lucky us, we got one more visit from Madam Tang, when one week after we received our girls, she returned to present another 5 babies to families traveling a week behind us, from our agency as well.  She found each of us in our hotel rooms and sat to visit, giving us more photos, taken during the presentation of our children and at the orphanage with the donation pose. This time she couldn’t even speak to Aimée in Chinese, that she wouldn’t look at me and get upset. Madam Tang cried. I don’t know whether they were tears of sadness, because this baby, she loved, wouldn’t acknowledge her, or because she was happy that Aimée had taken to me so well. I hope it was a little of both.   Our time in Guangzhou also afforded us time to get to know the other families with children from our orphanage. We were very fortunate to have had a great group that rallied together and has plans of keeping our girls in touch. One family is from Georgia, the others 2 in San Antonio, 2 in Houston, and us in Austin! One of the San Antonionites is a lawyer and had suggested we reunite one weekend following our readoption proceeding.  Sounds like a plan to me.   Several families spent an overnight in Hong Kong. Having just flown in, and dropped our bags in our hotel rooms, we gathered up babies and baby supplies and took a train, a bus, a ferry and a tram to the top of Victoria’s Peak! What a view!

The busy harbor and city were spectacular. We all laughed about the many methods of “transportation” our children had experienced in such a short time! I have to say, our Aimée is one adjustable baby. She just went with the flow, snoozing on the go, having Cheerios sustain her if we weren’t able to sit for a meal, bobbling along in a stroller, that others might not have given the time of day! We got a CHARM!   Now home 2 days ....it’s clear she’s home. She adores her big brother, and he adores her. She’s not alone a second that he’s not at her side answering her every need. We’ve had to explain that to continue this behavior would create a demanding baby and he has to let her be “sometimes.”  It’s hard for him, he’s waited so long! And now she’s here! Bill is his loving, patient, calming self, and Aimée clearly likes him too. A little wary of the mustache, but that will pass in time.

The dogs were very interested and wanted to be in her face, literally, licking her cheeks, ears and lips. She lets them know that’s not okay. A visit to the pediatrician on Tuesday morning, should yield the epitome of health. Okay maybe a cough! But otherwise, ACES!   In summary, we’re very ecstatic! Thanks to all for the love and support throughout this long journey. It paid off.  We hit the JACKPOT!