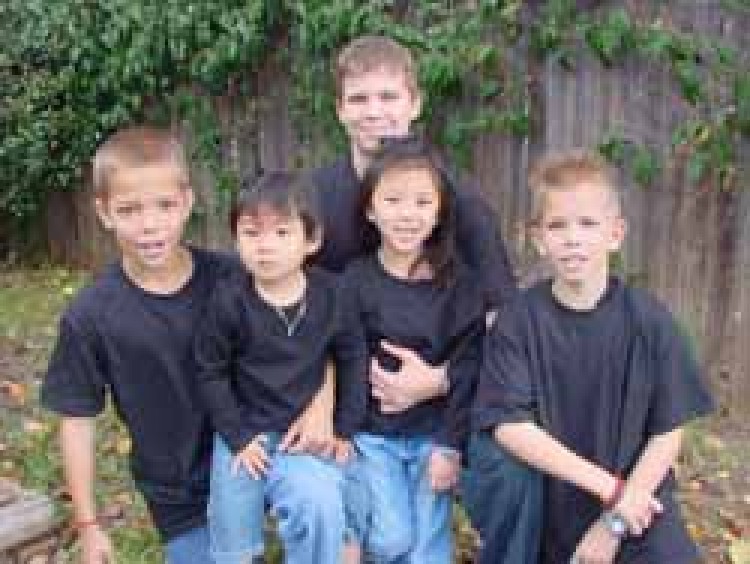 The Vascular Birthmark Foundation , the leading not for profit in the world for children and adults with such vascular birthmarks as hemangiomas and port wine stains, has recently opened a new program: Orphans With Birthmarks. This program will help unite children with these conditions with families ready to parent them. In addition, Orphans With Birthmarks will provide free medical treatment of these birthmarks to adopted children who do not have insurance.

Here is one family's inspiring story:

My husband, John, and I have 3 biological sons, but felt that our family was not complete. Since my husband and I both have adopted siblings, adoption was always something we considered. In 1998 we decided to begin the process of adopting. After a lot of research and consideration we decided to adopt our daughter from China. After a 9-month “paper chase”, we traveled to China in August of 1999 to bring our daughter home. We knew from the beginning that she was meant to be part of our family.

After our first adoption experience, we talked about adopting again; this thought was always in the back of our minds. In May of 2004 I had an overwhelming feeling, that I can't explain, to go to a website that I had visited many other times. This website lists international "waiting children." When I opened the website I saw a small picture of a little girl, so I enlarged the picture so I could really see her. When I saw her eyes, I felt an instant connection to her and felt that she was my daughter. She had a hemangioma on the bridge of her nose and over one eye. I called my husband and asked him to look at the picture and he said, "she's a cutie", and he also knew that this was his daughter. About a week later I said to my husband "should I call the agency and see about the little girl?" His response was an overwhelming "yes"(he always wanted to adopt again). I called the agency but found out that some other families were considering adopting the little girl. Even so, my husband and I began researching hemangiomas to find out all we could about them. Neither of us had any previous knowledge about them, but we quickly educated ourselves. While researching hemangiomas, I ran across a website about a foundation that Linda Shannon started called the Vascular Birthmark Foundation. About a week later I called back to the agency to see if anyone had made a decision about the little girl. The lady at the agency told me that she thought this child would be easy to adopt. However, all the other families had turned her down. The prospective families had received a wide variety of medical opinions from possible brain damage to vision problems to her requiring major cosmetic surgery. The adoption agency said that they were going to have to send her back through the system, but offered to let me consider another child. I explained that my husband and I were not actively seeking an adoption at this time. Although, we felt a connection to THIS little girl and knew that God had presented this to us. We knew that if it were meant to be she would be our daughter. The lady at the agency didn't want to send me the video because she said "I know you are going to call me in a couple of days and say no." After some pleading and begging she agreed to overnight the video and pictures to me. In the meantime, I started calling for appointments to get some medical advice. Several doctors turned me down in my area. They didn't want to try and make a judgment based on a video or picture. Then I remembered Linda Shannon's website and found a link to doctors on this site. One of the doctors on her list who specializes in vascular birthmarks had an office about 5 miles from our house. I called and they were happy to see us.

When the video came the next day I was about to show it to a friend when my phone rang. On the phone was the lady from the agency. She said she had received a call from Linda Shannon who had been contacted by a family with the picture of the little girl (they wanted to be assured that the girl was being adopted). Linda then showed the picture to the top doctor in the US who specializes in this area, Dr. Milton Waner. His comment, she told me was that this little girl was going to fine. He thought she would probably need a couple of laser treatments to help fade the birthmark. The lady at the agency was so excited to give me this news.

The next week we visited with two doctors. One of the doctors was Dr. Buckingham; we discovered that he had worked with Dr. Waner in regards to vascular birthmarks. He totally agreed with Dr. Waner as did the other doctor we visited with, that she would probably need 2-3 laser treatments. We then called the agency and told them we wanted to move forward with the adoption. In the midst of all of this I was put in contact with Linda Shannon. We became instant friends and began communicating by e-mail. One night she asked me to call her, she was very excited. She had decided that she wanted to start a foundation to help children with birthmarks find families. I was thrilled about the prospects of this. I wanted to help her in anyway that I could. My heart aches for every child that needs a family. Now, I am working with Linda as part of Orphans with Birthmarks. We hope through this to help every child with a birthmark find a forever family.

We believe as a family that God had a plan for our lives and part of his plan was for us to adopt our two daughters. They were meant to be part of our family from the beginning. We have a "red thread" connection with both of our daughters, even before we knew who they were.

The Steczkowskis are now home with their wonderful daughter, MacKenzie XiaFang.