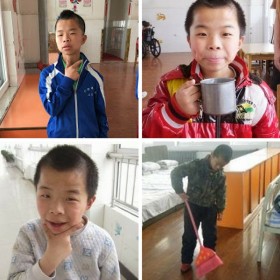 URGENT: Lucas Ages Out in 8 Weeks!!

Please, help us find a family for Lucas (Dang Wen Ke RK#33184). He turnes 14 at the end of December and at that time will age out! We have said it so many times before...no child who just turns 14 should have to raise himself.  His placing agency will immediately share his file if you are working with another agency.

We are looking for families already approved for two children or with a LID or almost DOC to step forward!  If now is not the right time for you, please consider sharing Lucas' story.  It may be the perfect time for someone you know to make him a part of their family.

Lucas is a sweet and easy going 13 year old. Although small in stature (4'7") he makes up for it in his talkative personality and charming smile. He is simply a joy to be around!  He has been described as a young man who "would be fabulous in a 2nd child adoption. He gets on well with other kids and lives to help them."

Currently Lucas is in a positive care environment and has learned independence. While independence is important for any almost 14 year old boy, what he truly needs is a family! SOON!  He is said to be one of the more capable boys in his room and can complete most daily tasks on his own.

An advocate who spent quality time with Lucas can sum up this remarkable boy in two words, GREAT POTENTIAL!  All he needs is encouragement, love and the right setting and stimulation. In the guiding and loving arms of a family Lucas will thrive and blossom!

"Of all the kids I said goodbye to this summer, saying goodbye to Lucas was one of the hardest. As I walked down the long corridors of his orphanage I tried to prepare myself for saying goo bye to this little kid. I held back the tears as I said goodbye for the last time. Lucas burst into tears. I didn't want to leave him, but I had to. I kissed him on the forehead and said one last 'wo ai ni' and promised myself that I would not leave him there. I would fight for him. I would advocate, I would 'speak, plead or argue in favour' of Lucas having a family of his own." ~Rob Molloy, A China Guy Advocacy

Please take a moment to view Lucas' video below!

To learn more about Lucas visit his RainbowKids Waiting Child profile page and follow the links to send an inquiry to his placing agency.