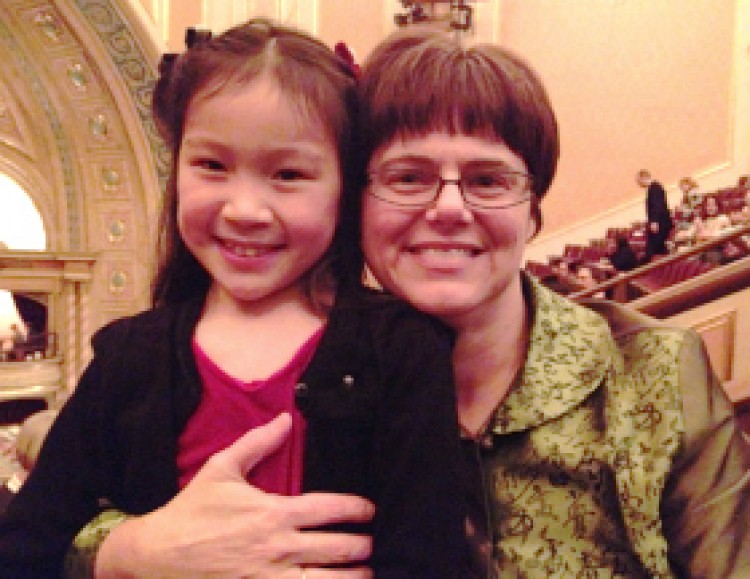 Note: Two years ago, RainbowKids.com responded to a plea by a mom who had recently adopted an older child from China. Things were going well, but her daughter, Emily, had left behind a sister-friend. Not a sister by blood, but one with whom she shared the bond of growing up and surviving within an institution. Bonds and attachments, as adoptive families know, do not need to be by blood to feel very real and life-long. Emily's mom reached out to her agency, and to RainbowKids. Her daughter wanted her best friend to also be adopted by a family. Read "My Best Friend Needs a Family." Love makes miracles. Emily's best friend found her family, and both girls are thriving. Today Emily's mom shares with readers her experiences, two years after adoption.

This week I had the pleasure of spending an evening with my younger daughter, Emily. Big sis Corrie was spending the night at a friend's house and we had a special mommy-daughter night. Emily was delighted to have me all to herself ! At age 7, she has been home just two years and she has thoroughly embraced her new life.

Can you imagine being 5-years-old and never having anyone sit down and read you a book ? Imagine seeing beautiful snow outside but not even once being allowed to play in it. Or how about still being hungry after dinner and not having any chance to get more to eat. What about wanting a hug but no one being willing to give you one? This is just a small part of what Emily experienced during her years in living in an institution.

Today Emily is a very happy little girl. Her favorite color is purple, she loves Rapunzel and Princess Sofia and she has a large group of friends. Yesterday she spent two hours outside building a snowman with a friend. She gets a hug any time she wants and she never goes hungry. We watched Tangled on TV, snuggled right next to each other. (She has the movie nearly memorized by now). Then it was upstairs to sit on her bed and read a book together. After the book, I tucked her into bed and gave her at least three kisses and two hugs before she settled down for the night and went to sleep.

There is not a day that goes by without her telling me how much she loves me and how happy she is to be here and have a family. She has a much different perspective on life because she was older at the time of adoption. She knows what her life would have been had she not been adopted. I know that we are never to expect our children to be grateful for becoming part of a family half way round the world (after all they leave all that they have ever known behind), but Emily is very grateful. On her own, she reflects and remembers the life she had before, compared to the love and daily life in a family that she now has. We, her family, are the truly lucky ones.

I remember some of the questions that I had before adopting an older child, and want to share with those considering this path the answers I have learned:

1) What if they have trouble attaching?
I did my homework and read quite a lot about attachment prior to adopting Emily. Also, in many cases, the older the child is, the more information you can get on their personality. All of the reports on Emily indicated that she was smart, got along well with others, and was well behaved. (I also asked what she liked to eat : candy, cake and cookies!)

Before we traveled to adopt Emily, I sent her a box of stuff including a three page letter filled with all of the questions I thought she would have about her new life and family and the answers to those questions. She knew, before we ever met, that I was an eye-doctor, that she had an older sister, that she would have her own room, and that Mommy was going to take her to the doctor to get her back fixed (she has scoliosis). We even went to Build-a-Bear and recorded my voice saying Ni Hao Ru Ping, Wo Ai Ni. Hello Ru Ping, I love you! When we did finally meet, Emily recognized my voice right away as the voice of the bear! I included photos of her new family and our house.

I knew to meet her where she was at, .letting her hug me and sit on my lap when she was ready. I even let her paint my nails bright red. Orphanage kids are often younger emotionally than they are chronologically. It would not be unusual to have a newly adopted 10-year-old want to sit on your lap and snuggle. Even today, two years after being adopted, she LOVES to snuggle!

With 20/20 hindsight it probably WASN'T the smartest idea to buy red nail polish. I didn't want to hurt her feelings by removing it so I looked like I was hemorrhaging from my fingers for several days!

2) What about the language barrier?
Well, since we had several months before travel, my older daughter and I took a fairly intensive course and we learned how to speak, read, and in Corrie's case write Mandarin. It was actually fun to learn another language and it has really helped me understand Emily's difficulties in learning English. For instance, there is no conjugation of verbs in Mandarin: he is, they is, you is, you is yesterday, etc. There is also one word that covers singular pronouns: Ta is used for he, she and it. Having a basic vocabulary in Mandarin REALLY helped in the first few months.

One very funny episode happened in China where it was helpful to know what Emily was talking about. Our first day in Guangzhou, Emily got to swim for the first time. She absolutely loved it and we went three times. Upon awakening on day two, Emily announced to us: "Bu Zaofan, hui yoyo!" "NO breakfast, go swimming!" We went to breakfast anyway because the pool hadn't opened yet. Emily just sat there, arms folded refusing to eat. Then my sweet daughter Corrie told her : Yi Zaofan, Er hui yoyo. One breakfast, two swimming. She was OK after that.

Of all of the potential issues with older child adoption, I would have to say that language acquisition is the most common and predictable challenge. If you expect your child to be fluent in English in six months, you are being unrealistic. It can take five years or more to become completely fluent in another language and some older kids never really become entirely fluent. Emily now tests as being proficient in English but she still makes numerous grammatical errors in her speech and writing. She is constantly learning more vocabulary but many of the words she is learning are words her peers already know. She is getting straight As in first grade but she is about a year older than most of the other children in her class. Reading is just becoming fun to her because she now has most of the background vocabulary to understand the story. I spend more time helping her with her reading because we often have to go over what she has read to make sure she truly understands it.

I have a friend who adopted a teenager from China. This sweet young lady is now a junior in high school. She is getting great grades but her mom has to go over the reading in every subject to ensure that she completely understands. An assignment that might take 20 minutes for a regular English speaking student takes her nearly an hour to complete.

If you don't believe you will have the patience to provide long-term additional academic support for your older adopted child, you should reconsider adopting in this age range.

3) What if the child I adopt isn't what I thought she/he would be like?
I guess I would say count on it! To quote Forest Gump "Life is like a box of chocolates, you never know what you're gonna get." Your child's adoption file accuracy is limited by the descriptive abilities of the person preparing the file and the medical resources available. In my daughter's case, everything that was written about her personality and academic ability was right on. She is a sweet, very bright little girl who excels in math which was described well in her file.

The information about her medical condition was incomplete, however. There her back issues ended up being more involved than the original diagnosis of scoliosis. An MRI showed that she also has a mild form of spina bifida called diastematomyelia. An ultrasound revieled that she has one kidney. The kidney works fine thankfully. She had her spinal cord detethered (the spina bifida part) prior to getting a rod put in her back for the scoliosis. I had researched her special need and I did know going into the adoption that there was a chance that she could have spina bifida. I am actually glad that I did not know the full extent of her condition. I would have felt too intimidated by it to pursue adopting and I would have missed out on a totally awesome kid!

When you adopt a child with a listed medical special need, it makes a lot of sense to do research on it, including any other conditions that could be associated with it. Prepare for the worst, hope for the best.

4) What about the flip side of this: What if YOU aren't exactly like what your new child is expecting?
Remember, if you are adopting an older child, you are adopting a fully formed person with their own opinions, thoughts and dreams. In Emily's case, even with all of the prep work on my part, I still wasn't quite what she had pictured in her mind. She could not get over the size of my nose! Mama yo da beize! Mama has big nose! Apparently the two dimensional photos did not prepare her for the three dimensional reality! She stared at my nose with a mixture of horror and fascination for days. She would measure my nose with her fingers, then compare it with hers. She also wanted to have a mama with long hair. I even tried to grow my hair out but its very thick so it just didn't happen. As an adult, with full reasoning ability, we can handle altering our expectations much more easily than a child can. Please remember give your new child acceptance and time to adjust to their new reality.

In conclusion, I am very happy to have adopted an older child! I hope that by being candid about my experience, others may gain more insight into what it would be like to adopt an older child. I hope that some of you decide to take the leap of faith and pursue it!

Sharing your story is the strongest tool for advocacy! Contact Martha to share your story, and help waiting children find families.