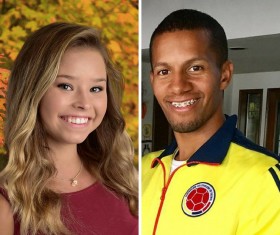 My name is Katelyn, and my family and friends call me Katie. I am a junior in high school in North Carolina, where I am at the top of my class academically (with a 4.4 GPA). I am also a competitive gymnast and have committed to a full Division I scholarship at a wonderful university in my state. What people don’t know about me is that I was adopted – adopted from Novosibirsk, Russia.

I often wonder, “When people hear that, what do they think of?” Lately I am afraid that too many negative things, worries, and concerns run through people’s minds. I’ve learned that many people, including me, have heard many negative stories about adoption, and not enough success stories.

This is why I am here to share mine.

When I was born, I was 5 pounds 3 ounces, and my biological mother left me in the state hospital in Novosibirsk. I should have weighed 12 pounds by December. Instead I was only 6 pound, but I was still fighting to live against all odds.

I was transferred to the orphanage with the label “failure to thrive.” Adoption agencies deemed me “unadoptable,” yet I still fought for my life.

The doctor at my orphanage took me from the baby room and used to let me play in her office while she worked. When my parents called the doctor to discuss another child they might have considered for adoption, she told them about me.

My mother says that my charisma and spirit affected the doctor so much that when my parents spoke to her, all she spoke about was me. Many of my parents’ friends cautioned them not to proceed, but my mom and dad responded together from separate phones, “She is our daughter, when can we come bring her home?” My mom swears it was inspired by God. There was no way to explain it. Although, when my parents met me for the first time, I had become very ill. I still kept fighting. When they finally brought me home, I was given strong antibiotics, and I began to thrive quickly.

Although it seemed grim for me from the start, with the proper love and care, I was to become the young woman I am today, almost getting ready to be on my way to college.

I believe that it is a shame so much negativity – from stereotypes, or stories we’ve heard – is associated with the very thing that has given me a family, my life, and the blessing that I have today.

I share my story in hope to inspire many others, in hope to lift the “burden of negativity” keeping many children that are like me from being adopted and not given the opportunity to thrive as I was.

I hope that my story shows that only the proper love and care can have the ability to give a child a second chance, a second chance for a happy life and a chance to thrive. Thank you for taking the time to read my story, and I hope to have either changed what you have believed or have encouraged you to spread the word to others about my story or other success stories you have heard. Thank you for yet another opportunity to share my story and possibly save another child just like myself.

More about Katelyn: Katelyn, adopted from Novosibirsk, Russia, today is a junior in high school. A competitive gymnast with a spirited personality, she believes adoption – and having a family’s love and care – has transformed her life. Katie life’s had a difficult start, but that’s one of the reasons she values all the more the opportunities she’s had and the parents who’ve always told her how much they value her. She knows adoption isn’t perfect, and that families aren’t perfect, but that’s also why she tells her own story: to bring others the hope that she has found.

From an Adult Adoptee: Advice to Adoptive Parents

As an adoptive parent today, there is every reason to learn about and honor your new child’s country of origin. (To say it simply: There is no longer any excuse not to.) We are constantly bombarded with information on a daily basis, and we have answers to even some of the most pressing questions available at the touch of a screen we can pull from our pocket.

Limited Mirrors for People Who Resembled Me

My parents are fantastic people and have been exemplary to my sister and me, but they were at a massive disadvantage when they adopted us in the mid-80’s for the simple fact that information about Colombia and its culture were not that readily available. They are monolingual English speakers, as is the rest of the family, so it was not until high school that I was exposed to Spanish for the first time (and even then, the instruction was mediocre at best). Their house is still geographically isolated from any ethnic diversity, so my only mirror for people that resembled me when I was growing up was a meteorologist on TV named Steve Pool and eventually Ken Griffey, Jr.

This issue of ethnic isolation was what affected me most while growing up. My family, friends, teachers, coaches, people at restaurants, everyone was white and even my sister could “pass” for a white person during the winter months.

Ethnicity and Identity: Dreams and Dialogue

I can still vividly remember a dream I had when I was approximately 13 years old. In the dream I walked to the bathroom on the bottom floor of my parent’s house, turned on the light and the reflection staring back at me was a white face. Shocked and angry, I jumped back and was curious as to how my brown skin had been kidnapped. Twenty years later, I look back on that dream, still happy it was only that—a simple dream. No desire to be white has ever crawled into my mind, even when I endured ignorant and racist comments in my academic and athletic life. I have always been and remain proud of where I come from and where I plan to go.

And that is where my parents, especially my mom, have been so influential.

From the time I can remember, my parents have always been very open with us about our past and as we got older, they did not shy away from having the difficult conversations about identity and our biological families. I commend them for respecting us enough to tell us the entire truth as they knew it.

Of course, their own life experiences could not have prepared them to completely answer me when I came home from elementary school asking what the N-word meant, for example. While they were open to hearing questions about race/ethnicity, it has become clear to me they were unprepared to have profound discussions about it or offer any kind of meaningful advice regarding those topics.

I am convinced that had they had more training or even simply a more diverse group of friends and acquaintances, my sister and I would have been more prepared to articulate our own feelings of identity and belonging as we continued to develop.

I have described these experiences to highlight my own advice to those embarking on this tumultuous yet rewarding experience of adopting a child: Out of respect for your new son or daughter, do not be shy. Even if your voice quivers and your palms sweat, have the audacity to look them in the eye and have the courageous conversations that will ultimately lead to enhanced trust between you. You owe it to yourselves and yes; you owe it to them us.

More about Jacob: Jacob was born in Cali, Colombia. He was adopted in the mid-80s by parents whom he describes as supportive and exemplary to him and to his sister.

Noting too that he had limited exposure to his country of origin and culture growing up — or to others who looked like him — Jacob considers the experience of growing up adopted and the questions he came to ask about identity and belonging. As he reflects on his experience, he offers his thoughts about what adoptive families need to know from the start, plus words of encouragement and courage to families, especially when the difficult conversations arise.

He was raised in the Gig Harbor/Tacoma area where he attended high school and played soccer. He studied international relations and Spanish at Pacific Lutheran University, served as a Peace Corps volunteer in Panama and completed an M.A. in public policy with an emphasis in Latin America at Leiden University in the Netherlands. In 2004, he found his biological family in Colombia and has maintained a positive relationship with them. He enjoys traveling, dancing, amateur photography and is learning French. Jacob will return to Washington State this summer to begin teaching Spanish and coaching soccer.