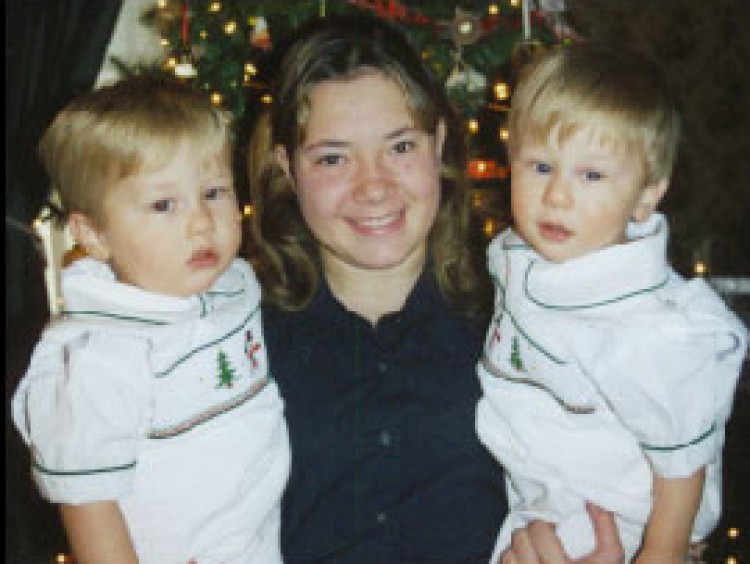 After months of discussing and planning adoption, the answer came for Mark Kessinger and his wife Renee after sitting down and watching the evening news.

The television screen illuminated with graphic pictures of overcrowded orphanages, filled with children surrendered by parents unable to feed them after the economy collapsed last year in an unstable Russia (this article written November 1999).

After watching the heart-rendering segments on NBC Nightly News Mark and Renee decided this was it.

"It just fit. It was like searching for the perfect doctor," Mark Kessinger said.

For Kessinger and his wife it was the perfect adoption. They began the process of the Russian adoption through an approved American adoption agency after deciding they would like to adopt biological twins.

"We were told we would wait for years on twins. The social worker suggested we adopt twins of the heart, which are two children not related, but have bonded while in the orphanage," he said.

The couple attended a seminar on Russian adoption on a Friday evening and was notified by their caseworker the following Monday that she had found two infant twin boys.

After their stretch of paperwork was approved, the couple was notified they would be able to pick the boys up in the overflowing orphanage in Glazov, Russia.

The Kessingers watched videotape footage of their twin sons before actually meeting them. "We studied that videotape so well that when we finally met the boys my wife already could tell them apart."

In August, Mark and Renee traveled by flight overseas to Moscow then on a 700-mile train ride to Glazov to meet their 11-month-old twins. They had to stay about two weeks to legally adopt the children. While visiting them in the orphanage, Mark and Renee were told by workers that they had witnessed their first steps.

"It was a very special time. We were told that the boys might cry when they saw me because they had never seen a man. Neither boy cried when Renee and I were there and actually cried when we left from visitation."

Conditions all across Russia are very sad, Kessinger said. The orphanage gets 15 cents per day per child. The twins were living off of potatoes and clabbered milk, he said.

Although the country appeared to be in shambles the legal system was very much intact, Kessinger said. "I was very impressed. The Russian laws were very favorable to the children and adoptive parents."

The Russian government holds newborns for three months to give the birth mother an opportunity to change her mind or another relative the chance to adopt the child. After three months the child becomes property of the state, he said.

The government tries to place the children in a Russian home before agreeing to an international adoption. No one in Russia could probably afford to adopt both our boys because the government will not allow biological twins to be separated, Kessinger said.

If an international adoption occurs the adoptive parents are encouraged to implement some Russian culture into the child's life. "My wife and I have been reading up on Russian culture. We also plan to take the boys to Russia when they become young men."

Mark and Renee decided to hold onto the boys' Russian names with an American add on. They call Cason by his American name, which is Cason Alexey and Sasha David by his Russian name, Sasha. "I've already nicknamed them Sputnik and Mir," Kessinger said.

Cason and Sasha got a good report at the doctor's office when in America. Although they were both underweight and slightly anemic, there were no major problems.

Renee, who is a preschool special needs teacher, is staying home with the boys until after Thanksgiving when she will return to work. Her retired parents will care for the twins during the day.

Mark's wife Renee said adopting the twins is the most rewarding thing she has ever done. "I think we appreciate having them more seeing what they came out of." Mark said, "It's been great. We feel like we made the right decision".

The 14-month-old twins are developing their English vocabulary. The proud father brags he taught them how to hoot "touch down." The twins did pick up the Russian words kaka, which means sleepy, and papa for daddy , he said.

Cason and Sasha live with the couple in their Huntington home along with Mark's 14-year-old daughter.