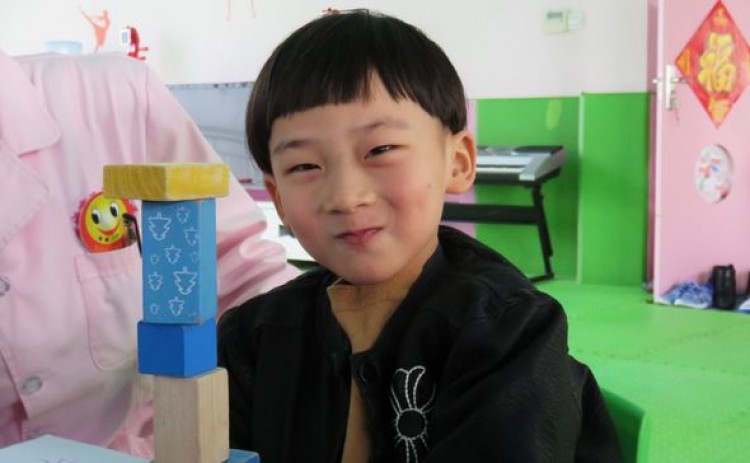 Rainbowkids would love for you to meet our latest Hope Gallery child waiting for his forever family to discover him! Our Hope Gallery features the words of an advocate who has spent quality time with a waiting child. If now is not the right time for you, please consider sharing Theo's story as it might be the perfect time for someone you know!

Theo (RK#35310) likes to break misconceptions.  When I was told that the next child I would get to see in the orphanage was a 6-year-old boy with cerebral palsy and multiple lower limb issues, I automatically had a picture in my head of what this child might be like. The effects of CP can vary widely, but it’s one of those medical needs where it’s hard not to imagine the worst. Add to that his congenital leg deformities, and I found myself bracing for a tough meeting. Then Theo was brought in, and over the course of the next few minutes I was reminded how easy it is to limit someone based on a label.

Theo was shy at first, but with his favorite caregiver beside him he showed me glimpses of his bright personality. As I asked various questions about his physical needs, he began stacking blocks on the table. At first I noticed the tightness in his hands, but my eyes were then drawn to the determination on his little face. He stacked the blocks higher and higher, never wavering in his attempts even as his muscles fought him. I learned he has made remarkable progress both physically and cognitively. Every day, Theo has three hours of therapy. The last update we received on him said his pronunciation wasn’t clear, but with a language class it has improved immensely. The caregivers say he is now similar to his peers cognitively, and he can count from 1-100 and write 1-20. They kept referencing how hard he works, and I realized I had predetermined ideas about this child’s abilities just upon hearing his diagnoses. Theo kept building towers of blocks, and we would all laugh together when they eventually fell over. But that never stopped him from trying to build another tower.

Even at 6 years old, the caregivers said he understands adoption and wants American parents. He wanted to show me how well he is doing so I can try to find him a family of his own.

As Theo used his walker to get around the room, I noticed that he never asked for help from the many caregivers. If he encountered an obstacle, like needing to turn around, he handled it himself. As we were wrapping up our meeting and preparing for the next child, I heard Sue, our Holt China staff person next to me, exclaim, “Oh! Look!”

I turned my head and saw Theo using his arms to hold his body above his walker (see video). He swung his legs beneath him, and a small but mischievous grin lit up his face. I was reminded of a gymnast on the parallel bars. Even when his arms gave out or he lost balance and fell into the walker, he would get up and do it again. As we scrambled to get photos and video of his unique talent, it struck me how much I had underestimated this boy. Theo has overcome so much in his life thus far, but not because anyone else forced him to. I could tell that Theo has an innate determination to do what he sets his mind to. His body may fight him, but he is unwavering in his efforts to improve. And I can only imagine how much more progress he could make if he had a family of his own to cheer him on.

There is a $3,000 Special Blessings grant* available to help cover some of the cost of Theo’s adoption through Holt!

Could you or someone you know be the right family for Theo?  For more information contact Jessica Zeeb at jessicaz@holtinternational.org.

How to Avoid the Syndrome of Parent Burn Out