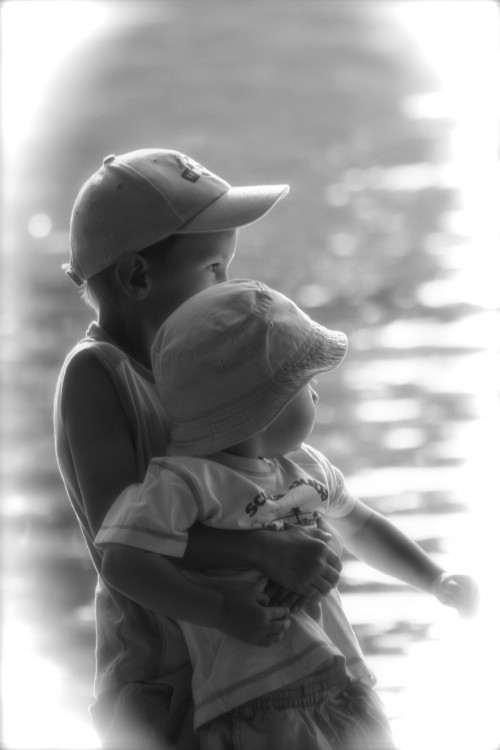 It has been said that adoptive parents go through hard labor with a pen to adopt their first child. In our case, by the time my husband and I got our son Trip, then a year old, from Honduras, our stack of adoption documents outweighed him.

Adoptive parents also tend to see their long-awaited first child through the eyes of love. To us, Trip was a star.

Thus, like millions of parents before me, I doubted my ability to consider a second child as beautiful and as lovable as the first. This is the story of Michael, the second child.

One Friday I received a telephone call about a boy available for adoption. At that point the adoption agency knew nothing about him but his name, sex, and birthplace. However, if we wanted to make him ours, we had to be in Honduras in eight days to initiate the process!

All that week we struggled to get more information. We had submitted adoption applications to various countries. However, we hoped for a child younger than Trip and of Honduran heritage. It gradually became clearer that the baby was what we really wanted for our second son and for Trip’s brother.

However, according to experts, would-be adoptive parents should never accept an adoption referral before seeing the child’s photograph. In the hullabaloo of that week, we did receive a so-called “photo” of Michael. It turned out to be a fax of a fax of a photocopy of a snapshot. No matter how hard we studied it, we could not find the infant in the picture!

My husband and I flew to Honduras still clueless about the child’s appearance. After arriving, we proudly passed around photos of Trip to various people. To our delight, we heard that Michael looked very much like Trip.

That evening we finally met our prospective son. Seven Hondurans (our lawyer, the interpreter, the foster mother, her three grandchildren, and her maid) observed us raptly the whole time. It was as if my husband, the infant, and I were (reluctant) soap opera stars. Michael looked fine in the three-month-old-baby role, except - he did not resemble Trip.

The infant was healthy and sturdy and, oh, so little. I was scared to pick him up and asked my spouse to go first and then place Michael in my arms. I was afraid of dropping this tiny boy.

Michael had a worried little grimace at that meeting. Early in his week with us, this was his habitual expression. His life in the several months following his birth included a stay in a foster family, a stay in an orphanage, a stay in another foster family, and a hotel stay with us. He was scheduled to go after that to a foster family for the four-month period in which the Honduran government would decide whether or not to finalize his adoption. Thus, this little guy was right to look worried and skeptical.

During out week together, Michael watched everything we did and everywhere we went with utter amazement. Having rarely been outside of a crib, he was stunned by this whole new world, and it often proved too much for him. During outings my husband and I watched as the sensory overload transformed the baby’s astonishment into sleep. Michael would fall asleep in his rolling stroller with the look of amazement fading slowly from his face.

I quickly became fond of the little guy. I sang to him, cuddled him, and took him everywhere with me. Michael particularly loved it when I danced him in my arms about the hotel room while singing, “Around the world, I searched for you . . . .”

Soon the baby was giving a big, toothless grin whenever he saw me. At that stage he had only three expressions while awake: the worried grimace, the amazed “O,” and the gummy grin for me. Fortunately, the grimace was seen less and less.

It bothered me, however, that I would be departing Honduras at the end of the week fond of Michael but not yet loving him. I resigned myself to leaving him behind for four months just liking him a lot. I tried to console myself with the thought that I would come to love him later. Then, the night before heading for home and Trip, something inexplicable happened to affect my feelings for the baby boy.

That evening we went to dinner at the home of one of the people assisting with your adoption. During the long drive back to our hotel, Michael was in my arms. I had brought a receiving blanket to wrap around him, though the night was balmy. However, at the direction of our hostess, an obstetrician, I instead was holding him in my lap with the blanket over his head as protection against the night air. It was very late, the ride was very bumpy, and the infant was under a blanket. Therefore, I kept lifting the blanket to peek at him, to make sure he was fine.

Each time, the sight touched my heart. There was something so right about Michael as he snuggled against me in total peace. He was wide awake, leaning against my breast, and sucking his thumb with perfect contentment. He had the look of a baby who knows he has finally found himself a mommy.

Only now, with Michael home with us for good, has it struck me what I looked like on that rough ride, with a big mound in my lap with a baby inside. But, that night, I carried him up to his hotel room with a full heart. In that room something occurred that I still cannot explain.

When I lay the baby in the crib, there was a light shining on his face. It shone directly on him, yet when I looked around, questioningly, I could not find its source. It was not the lighted, shaded lamp on the table nearby, nor was it the faint light streaming in the window or around the bedroom door. But, somehow, part of the child’s face was brightly lit. In the triangular light pattern, I could see, at each of the top corners, a wide eye and, at the bottom point of the triangle, a delicate mouth. For the first time I really looked at him, as Michael, and not as an imperfect clone of Trip.

I suddenly realized something - Michael was absolutely beautiful!

“You’re beautiful,” I said to him in amazement. “So beautiful. When did you get to be so beautiful?” And I said that three times.

Michael watched me happily the whole time, never taking his eyes off mine. It was as if he was saying in reply, “Mommy, I always was beautiful. I’m so glad you finally noticed.”

I still do not understand where the light came from and what happened. However, I know that I fell in love with my beautiful second son - with Michael - as I stood by his crib looking at his lighted little face that amazing night.

Adoption Terminology: What is an Apostille?

More Than One Simple Wish