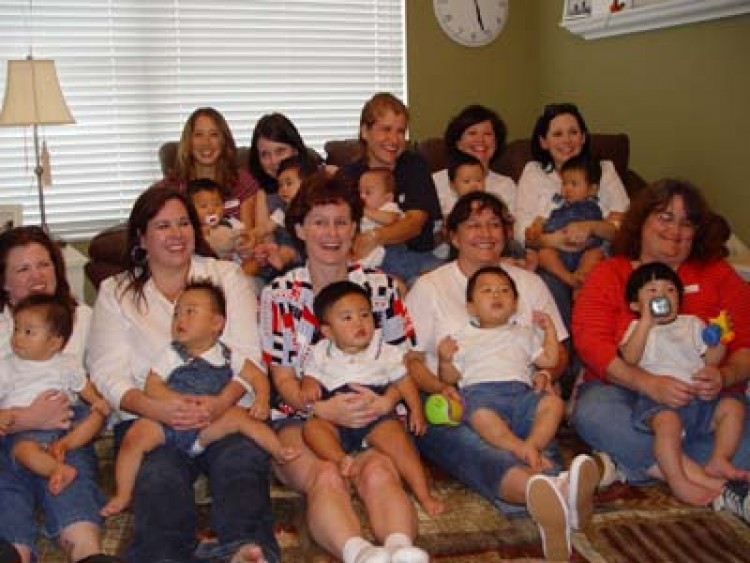 Our local social worker through FHSA set up a message board for families that were adopting from Korea . It was set up for us to communicate during the wait time of our adoption. Initially when the message board began there were only five families. One family, already having completed the adoption from Korea , was there to show that dreams really do come true. One family had received their referral and were awaiting the call for travel and three new families just beginning the process of adoption. I was one of the three new families. Through the next couple of months our message board grew to a group of 13. Later one other family became part of our group of friends.

I suppose I didn't grasp the entire “concept of adoption.” Sure you filled out a couple forms, wrote a couple checks, waited a little bit, and your baby comes home. I thought filling our forms and writing checks was going to be the most difficult part. I could not have imagined the “emotional” part would be the most difficult. If it was not for the support from the group on the message board then I don't think I could have made it through the process. Looking back now that my adoption is finalized I would not have wanted my adoption process to have been anything other than what it became. I now have friends for life.

Our group has bonded through experience. We were there to support each other. We cheered one another along. We helped with questions about forms and how long to expect between steps. We celebrated with each milestone. We wrote about attacking the mailman waiting for the 171-H to arrive. We wrote about decorating our baby's room. We joked about parking in the “expectant mother parking space” and daring any one to challenge us. We took a stand against the companies that sent free diaper bags to “expectant moms” and not taking into consideration that those of us adopting are moms too. We went to each other's baby shower. We rejoiced at the pictures of referrals being posted on the message board. We encouraged one another when no one “got it” except the group on the message board. We fought over the only baby girl in our group and the arranged marriage we could set up. The fight still continues today.

Then the lag in time came when all of us were waiting for either “the call” saying our baby was coming home or “the call” to travel. There were difficult months when there were no forms to fill out, no checks to write, decorating was done, showers were over, referrals were in, and we just had to wait. For me that time was the toughest. Mikey had come home a lifetime ago. Karrie and I were the next to have babies come home however we missed the quota cut off for Korea . We had to wait for 2005. We cried together. We encouraged each other. Another day completed and perhaps tomorrow the call will come. The holidays arrived with us celebrating saying “by this time next year all of our babies will be home”. The New Year arrived with more encouragement saying “this is our year ladies!” Then the flood gates opened and the first call came. “My son is coming home!,” could be heard shouting from my phone to another to another. Karrie celebrated the following morning with news that her son was coming home on the same flight. Our sons are coming home together! One by one all the babies came home. We celebrated with each other. We went to the airport to witness the escort and baby or the mommy, daddy, and baby coming off the plane. We have pictures of each event at the airport. First picture with a group of mommies and only two babies home to the final picture to date of all the mommies holding her son.

For the most part the message board has now become quiet. Emails off the board have replaced the message board as we now include various pictures of our children. We simply can't post that many pictures on the message board. Our emails talk of sleepless nights, teething, what formula to use, what brand of diapers, the best toys, and the latest accomplishments of said child. The encouragement has gone from surface level to true understanding as we've been together through this journey over the last year and a half. We've supported one another during the most difficult of times and celebrated during the most joyous of times. We get together with one another at the local mall, swimming lessons, painting pottery, play time, or just to have dinner together. We gather together as a group to celebrate the pending finalization process and our babies becoming US Citizens. The night before this last group gathering Carol was at the airport awaiting her daughter's arrival. Her daughter's arrival completed the group of babies coming home. Our group is now complete. When I began the adoption process I didn't realize adopting a baby from Korea would include 13 friends for life. I am thankful it did.