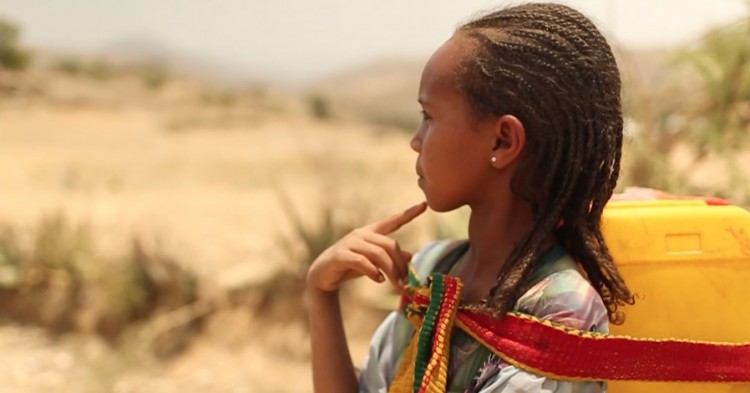 A Note from RainbowKids: The following article featuring Noah, one of RainbowKids Hope Ambassadors, has been graciously shared by charity:water, a non-profit organization bringing clean, safe drinking water to people in developing countries.  Every year at this time charity:water launches their September Campaign to not only highlight the devastating global impact on children and families who do not have access to clean water but also inspire those who can to create their own campaign, no matter how crazy and off the wall it is, to make a difference in the world water crisis.

Last week our team saw something very magical happen with a campaigner we love — that highlights the power of generosity and technology (both old and new).

You may remember Noah… he’s the voracious 13-year-old who was adopted from Ethiopia and has raised over $5,000 by selling handmade weavings for $5 apiece! Not only has he completed nine campaigns, but he’s spoken at dozens of school assemblies and recruited other generous friends to help make weavings and raise money. He’s one of our heroes.

Back in December, I had the privilege of meeting Noah at our NYC office. After he left, I received an email from his mom saying that Noah had just seen charity: water’s new video series, The Journey, and was blown away.

When he saw Episode 3, where our Content Strategist Tyler walks for water with a 12-year-old girl from northern Ethiopia, Noah remembered his own childhood and wanted to write a letter to let her know that he was actively fundraising so that she would not have to walk for dirty water anymore. It’s a beautiful thought — connecting our beneficiaries with the people who are working so hard to help. Although we knew it wouldn’t be easy, there was no way we weren’t going to try to deliver that letter to Tarik.

Fortunately, with our staff trip approaching, I was actually headed to Ethiopia. So I told Noah’s mom… “if you send me the letter, I’ll do everything I can.” And then a new journey began. Our partner organization was just as excited as we were. And not only did they trek all the way out to Tarik’s village in rural Ethiopia, but they translated the letter into Tigrinya and delivered it to her along with one of Noah’s weavings. The best part is...she wrote back! And then, finally, last week we got to close the loop by delivering Tarik’s letter and photos back to Noah and his mom… who were absolutely speechless. It’s a different kind of proof or transparency, and it’s not something we can provide to our supporters often. At least right now. But it’s such a cool reminder about the real individuals and real impact on both sides.

It makes me very proud to do what I do, and I hope it makes you proud too.

Charity:water challenges you to join them as they do their part to bring quality of life to children and families across the globe.  Consider starting your own campaign to raise money for clean water because the craziest thing we all can do for our global community is nothing!

September Campaign 2015: The Craziest Thing We Can Do is Nothing from charity: water on Vimeo.