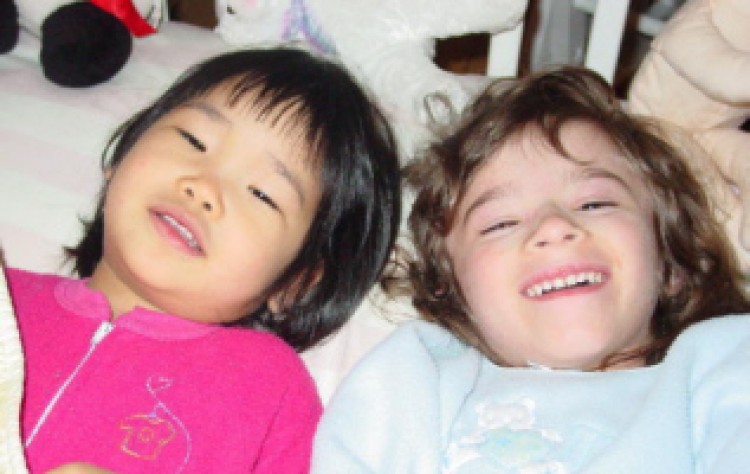 After five years of infertility and almost two years of waiting to adopt, my husband and I have finally built our family—with one daughter by birth and the other through adoption. As with many infertile couples, our experience was not the norm—we had one daughter prematurely at 61/2 months and the other after a lengthy “paper pregnancy” of 14 months. While our oldest daughter was conceived through in-vitro fertilization, our youngest came to us care of the Chinese government. Either way, we got the family that was meant for us.

Back on the Roller Coaster

After a number of surgeries and procedures, my husband and I finally conceived through IVF. But it seems that soon after we got the positive pregnancy test, we got on another roller coaster ride—that of a difficult, high-risk pregnancy.

At 30 weeks, I had an emergency C-section and our miracle baby, Kira, weighing less than 2 lbs, was born. We weathered our daughter's two-and-a-half-month stay in the neonatal intensive care unit, battling the ups and downs of her respiratory difficulties and

infections—the most serious of which was a staph infection that rapidly turned into bacterial meningitis. When she finally came home from the NICU, she was still a tiny 4 pounds, 9 ounces and needed to be on an apnea monitor (in case she stopped breathing) and on four different medications, which had to be given every four hours around the clock.

In due time the monitor and medications all went away one by one, and we settled into being a family. Now an active, good-natured six-year-old, Kira learns and discovers new things everyday. While she does have many special needs and still faces many challenges, we are amazed daily at what a special and determined child she is.

When Kira was two we began thinking about having another child. We had been told that the likelihood of having another premature birth was high and, frankly, we couldn't face the prospect of medical treatment and another high-risk pregnancy. For us, it made perfect sense to look to adoption to build our family. Before our IVF, we had done a lot of soul searching (and research) and had decided that we would adopt from China if the IVF failed. It seemed natural just to continue this plan to add to our family.

We didn't realize that this decision would involve a long and drawn-out labor unlike my quick and worried pregnancy. We spent the next several months compiling a mountain of documents. We underwent a home study, medical physicals, criminal check, fingerprinting, and scrutiny by the then pre-9/11 Immigration and Naturalization Service.

The experience was not unlike undergoing invasive infertility treatment; in fact, sometimes it was just as frustrating because we were at the mercy of ever-changing rules made by government bureaucrats halfway across the planet. After our paperwork was finalized and sent to Beijing , all that was left for us to do was wait.

Waiting for our Daughter

At the time that we submitted our dossier in August 2001, the wait for a China adoption from DTC (Dossier to China ) to referral was about 9 months. After 9 months' time, we were still anxiously awaiting our referral, with the wait time continuing to inch up. Finally after 14 months (the current wait is only about 6 months), our adoption referral came with a tiny photo of our baby clipped to the official Chinese paperwork. For the first time, we looked into the face of our new daughter and Kira's little sister. We only had two photographs of her—a tiny mug shot and a 3x5 snapshot of her laying on a multi-colored mat with spiky black hair, a double chin, and a quizzical look on her face (as if she had not seen a camera before and was wondering just what the photographer thought he was doing). We were instantly in love.

The orphanage named our daughter Qin Li Xia. We renamed her Ella and kept her given name Li Xia as her middle name, in part because it is one of the few remnants she has from her birth culture. We also fell in love with its meaning—in essence “Summer Jasmine”—quite a hopeful name for a baby born in February.

After a short and intense five weeks of preparing to travel (more official paperwork, visa applications, and packing), we were hurtling across the Pacific Ocean en route to meet our 10-month-old daughter, who was living in a small orphanage in the Guangxi Autonomous Region, which borders Vietnam in southeastern China. It was mid-December, with our plane trip back home slated for Christmas Day. After a frigid, whirlwind sightseeing tour of Beijing , we flew to Nanning , the capital of Guangxi. We arrived in early evening at our festively decorated hotel (complete with a giant Christmas tree made out of tiered champagne glasses inhabited by goldfish) and were told we would be meeting our babies in less than an hour's time. I felt excited—albeit very queasy—as we made our way haltingly by bus through snarled traffic to the Nanning Civil Affairs building. As our families entered the humid non-air-conditioned second floor hallway of the building, we could hear wailing coming from the room down the hall—the group ahead of us had just received their children. Our coordinator Anna led us into the cramped and stuffy waiting room across the hall, where we all looked at each other nervously, wondering “What have we gotten ourselves into?!”

Finally, it was our turn to go into the “Baby Room” across the hall. After a brief introduction by Nanning officials, we were told to hurriedly line up according to orphanage groups. Suddenly the nannies began bringing in the babies and calling out their names. It became quite loud and chaotic, with babies and parents crying alike. A palpable “ahhhh” could be heard when the nannies brought in five babies wearing matching peach fleece outfits and hats. They were all from the Hepu Social Welfare Institute, our daughter's orphanage. I strained to make out Ella's face, but it was hard to see with the way-too-large hats enveloping the babies' heads. Although the babies were obviously warm—with flushed cheeks—they were content and weren't crying until the nannies began handing them off. I heard “Qin Li Xia!” called, and we were suddenly holding a very tired and cranky Ella. When we removed the oversized hat, we were surprised to find her spiky hair had been shaved down to a peach fuzz. We were so happy to finally be holding our little girl.

When we returned to the hotel and took off the stuffy outfit (especially for our partially air-conditioned room), we discovered she had two layers of clothing below her fleece outfit. Inside her jacket pocket was a used washcloth—obviously her lovey used when she was fed. I held her tightly, giving her our first bottle together with the lovey in her hand, still taking in the scents of her former life. (During the trip Ella actually replaced her washcloth with a pink striped blanket we brought from home, which she insists on carrying with her everywhere to this day.)

The next morning she stood up in her crib, clutching her newfound blanket, and burst into tears upon seeing us. After a very warm bottle and some congee (watery rice porridge) for breakfast, she seemed to relax but still insisted that I not put her down. In fact, for the first three days Ella insisted that I carry her (even refusing the stroller and fussing at the baby carrier). On the fourth day, Ella must have decided that we were sticking around for good. At that point her personality blossomed and she began showing us that she could crawl (very quickly!) and wanted to interact full throttle with the rest of the world.

We consider Ella our second miracle baby. Like with most Chinese adoptees, little information is available about her beginning. What we do know is that her caregivers—the “Ayis” or “Aunties”—loved and interacted with her daily—she is a happy, affectionate, and curious child. What we do know is that she had a family of sorts—the other babies that were adopted from the same small orphanage were just as happy and obviously were used to playing together.

And finally we also know that she was placed at the gate of the Hepu Social Welfare Institute on February 12 th , 2002 , at 3 days' old. According to her orphanage report, although she could cry and suck, Ella was sickly when she was found. The report stated that after several days of special care at the orphanage, her condition was much improved.

What was left out of the orphanage report was that our daughter was placed outside the orphanage gate on the first day of Chinese New Year—the most important holiday in China . For Chinese families, this holiday represents a time of thanksgiving and new beginnings. Although we will never know the exact circumstances of what led Ella's birthmother to leave her infant, perhaps by placing her baby in a safe place on such an auspicious day, she was also making a symbolic gesture—providing her daughter a chance at a new life.

A Chinese folktale—adapted by those who have adopted from China—is that an invisible red thread connects you with all of the significant people in your life, who you are destined to meet regardless of time, place, or circumstance. It is said that the thread may stretch or tangle but will never break. We feel this way about our two daughters, who are now connected not only by family ties but also by the fact that they both faced uncertain beginnings. Even though they came to us from very different places, we are connected forever as a family, intricately tied by that invisible thread.

Out of this journey—through both birth and adoption—we have learned that there are few “knowns” in life. However you come to parenting, it is a proverbial leap of faith. It may be a cliché that when one door is closed, a window is opened, but there is a kernel of truth here. We know—we had to leap through two of those windows.