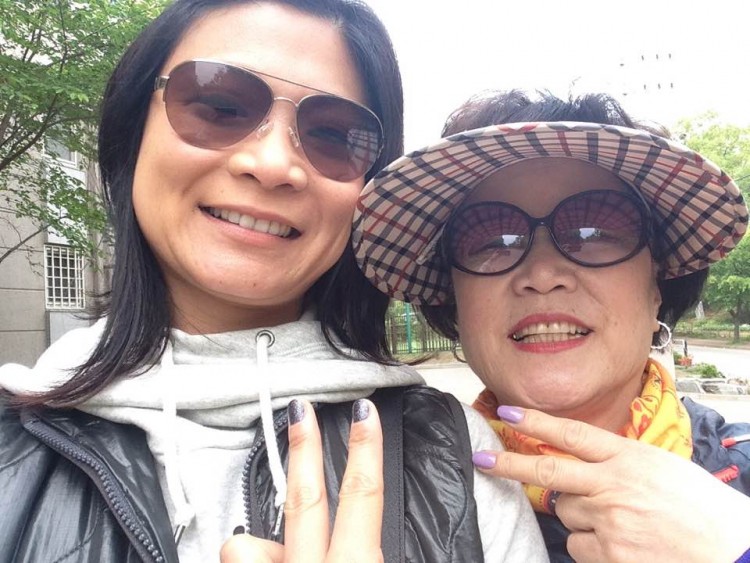 It all started last summer with a craving for Korean food.

That’s when Dillon adoptee Julie Evans dropped by an Asian eatery in Detroit and the Korean owner inquired about her heritage. Soon, she was sharing her story: How she, too, was Korean-born and had joined her adoptive family in rural Michigan at 5 months old.

It was a question Julie had considered several times. She had weighed the pros and cons, grappling to balance her personal curiosity with the worries of her adoptive family. And each time, she tabled the matter for another day.

Now, at age 38, she realized she was finally ready to move forward and start the search process. Christmas 2014 came early for Julie. She received a call from Jan Dunn, Dillon International’s birth search coordinator, in mid-December. “Immediately tears were flowing as she shared the news that my mother and father were located, and I had two older sisters and one younger sister.”

Julie learned that her birth mother was excited to hear that her daughter was searching for her and she was very apologetic that she had been unable to raise Julie. “She said that she and my father were very poor and the hospital had recommended that I be placed for adoption.”

It took time to come to terms with the reality that her often-wondered-about birth family had actually been located. “My friends and family were worried about the outcome; however, I decided not to have any expectations and be grateful for each step.”

In January—three days before her birthday—she received a handwritten letter from her Korean birth parents inquiring about her health, marital status and life. “They also told me the time of my birth,” Julie said. “That was such a gift.”

She headed back to the Korean restaurant for a celebration. She arranged a birthday party, including a dinner with authentic Korean food, to make the announcement to her adoptive family and friends that her birth family had been located.

The restaurant owner, also delighted for her, offered to help her compose an email to her birth family. They sent the message and waited for two weeks. When no response arrived, he volunteered to serve as a translator and they telephoned her Korean family. “I’ll never forget the first time I heard my mother’s voice. I was a living a dream,” Julie recalled.

After months of communicating through Kaokao Talk (a Korean communications app that is similar to Skype), Julie began the process of obtaining a passport and preparing to travel to reunite with her family in Korea.

“The staff members at Dillon and at Eastern Social Welfare Society were so supportive. They provided counseling services, translation services in Korea and continuous psychological assistance,” Julie said. “I couldn’t imagine a better support team. They approached every fear with understanding, ease and calmness.”

She flew to Korea in May and was greeted at the airport by her birth parents and a sister. They were holding a sign welcoming her to Korea. “My mother ran to give me the warmest welcome, crying, while repeatedly saying, ‘I love you.’”

Her time in Korea was filled with significant moments.

A childhood friend in America arrived in Seoul, providing 10 tickets to a Paul McCartney concert. The music was significant to Julie because throughout her adolescence, it nourished hopes of one day reuniting with her birth family. Midway through the concert, it began raining and her mother said in broken English, “Tears from Heaven.” Later, she and her father stood alone together on the balcony as the band played Hey Jude, a song that was special to Julie, a part of the soundtrack of many poignant childhood memories. “It was almost like a Lifetime movie, the timing filled voids I had carried my entire life,” she recalled.

Children’s Day was also unforgettable. Julie couldn’t wait to surprise her nieces and nephews with gifts and attention on this popular Korean holiday (May 5) that celebrates kids. Instead, she was the one who was showered with attention.

“When I awoke that morning, they surprised me by treating me as the child they had missed for years,” Julie said, recounting a beautiful day filled with bike rides, a trip to an aunt’s beauty salon and meetings with extended family members.

The day concluded with a trip to the facility where Julie was placed for adoption. As they stood outside the building, now transformed to a bank, “My mom started crying, trying so desperately to communicate with me,” Julie recalled.
Separated by different languages, the two could only cling to one another. “It was a pivotal moment that shifted the voids of curiosity and fear to forever love.” Additional clarity came on Parent’s Day (celebrated May 8 in Korea), when the family was able to sit down with a professional interpreter at Eastern Social Welfare Society and ask questions and sort out misunderstandings.

Julie said the experience of traveling to her birth country has helped satisfy her curiosity about her heritage and why she was placed for adoption. “Although I had little contact with elements of my heritage growing up, I was always attracted to Asian art and culture. This trip helped me fully realize that I really am truly, genetically Korean.”

And so, Julie—a small-business owner who is pursuing a Ph.D. in health psychology—arrived home feeling fulfilled and eager to share her experiences with close friends.

She soon learned that five of her adopted friends had also had birth family reunions of their own, but had never discussed their experiences because of feelings of shame or pain.

“I believe adoption has nothing to do with us; it just wasn’t the right timing,” Julie said, adding that she feels it is important for adoptees to share their stories. “I really encourage adoptees to talk about their experiences of confusion, identity issues and potential shame.”

Julie continues to keep in close touch with her birth family. She regularly awakens to text messages filled with love and encouragement, and the family continues their regular chats using Kakao Talk.

Her world is broader in other ways as well. “I have a bigger purpose in life. Reuniting with my family has reassured my desire to become a bridge between American and Korean culture. I believe my desires were led by a simple prayer from my Korean mother. She told me, ‘I prayed you would get a good education with more opportunity in the United States.’ My experience is the definition of a full circle.”

Why Does It Take So Long To Adopt A Child?

Phasing in a New Kind of Foster Youth Support