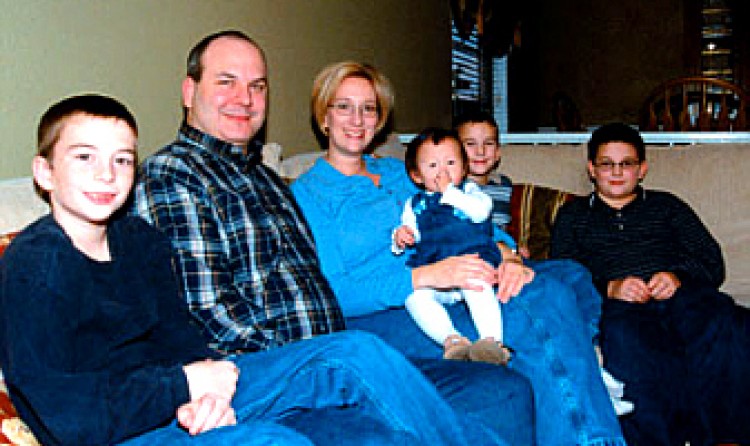 Ba Shu Liang (Leighanne now) was found swaddled in traditional Chinese fashion in a box on a well-traveled road in the Hunan province of south central China. Discovered by an orphanage worker, she had been placed in one of the areas that is known as a safe place to drop babies, where they are more likely to be found and taken in. She was approximately 2 weeks old when she was found.

“The mother obviously tried to keep her as protected as she could,” said Julie Agee, with tears in her eyes. Julie, Leighanne’s adoptive mother, explained that since the baby wasn’t left until she was two weeks old, and because she was left in an area where she was sure to be found quickly, she probably had a caring mother.

The one child rule is still in effect in China, so abandoned babies are common occurrences. Even in rural areas, which is where they believe Leighanne came from and where farming communities are allowed more children, sons are prized over daughters because they can better help with the work.

Long before Leighanne was ever born, the Agees began their adoption journey. “I was at a ladies conference at Wedgwood Baptist Church (in Fort Worth),” recalled Julie. “The speaker talked about adopting a boy through Buckner. At the end I was in tears.” It was March 2000.

Julie said she always thought that she and her husband Ben would adopt a child. By the time she heard the woman’s story, they already had three biological children, all boys.

“I came home and told Ben (about wanting to adopt). He laughed,” recalled Julie.

Julie went on the Internet and showed him pictures of orphans. She went to the library and checked out books on international adoptions and left them around the house.

Her persistence paid off.

“We agreed to pray for six months,” noted Ben. After four months, they both agreed it was the thing to do and began pursuing an agency to handle the adoption.

“We narrowed it to Buckner and one other organization that was out of town,” said Julie. “We chose Buckner because we wanted someone local who could hold our hand.” The Agees also liked Buckner’s range of ministries, and that it wasn’t just an adoption agency.

Though they can now see God’s hand in making them wait until Leighanne would be available, the Agees’ entire process took 27 months, much longer than most international adoptions. They first thought they might adopt from Russia, and then decided on Romania. “By the time we got our dossier, home study and (paperwork done), Romania had closed its doors,” said Ben. The same month Romania stopped allowing international adoptions, Buckner formally announced its China partnership with The Gladney Center for Adoption.

At the time they began their process with China, the rules were about to change, so there were a lot of applications being turned in. “Our group ended up to be one of the longest waits,” said Ben.

While they waited, the Agees continued to get ready for the changes awaiting them. They took the classes from Buckner which helped prepare them for as many contingencies as possible. “Buckner was very helpful in all the training and seminars and different support groups,” said Ben. “I felt like we were prepared for anything.”

They also discovered a group of people via the Internet who were waiting on adoptions in China.

When Referral Day came, they knew something was in the wind before they ever got the email with a picture of Leighanne. The Internet group started e-mailing each other, telling them that referrals were beginning to come in.

Ben was at work and Julie was at home when the email came. They had agreed in advance to open the email simultaneously, so they could both see her picture at the same time. As they talked on the phone, Ben was unable to pull up the picture, so Julie quickly forwarded it to him. “It was like the birth experience via email and a phone call,” said Julie.

When they arrived in Yuyang, they caught their first glimpse of the baby across the room when they arrived at their hotel to check in. The orphanage brings the babies up for adoption to the hotel where the people are staying. Even though they were supposed to wait until the orphanage employees brought the babies to their rooms, Julie couldn’t stand it. She walked up to one of the people holding a baby and asked for Ba Shu Liang. “The assistant director turned to us and put her in our arms,” recalled Julie. It was Nov. 18, 2002. Gotcha Day in the Agee household.

“After two hours (with the kids) they loaded us up in a bus and then we went and did all the paperwork,” said Ben.

After spending one more week in China, the Agees brought Leighanne home on Nov. 28, Thanksgiving Day. She was 9 months old, weighed only 13 pounds, and couldn’t turn over. In a four-month period she quickly accelerated to walking. She enjoys playing with her three brothers, Austin, 10, Jordan, 9, and Zach, 7.

Blending her Chinese roots with her new American heritage is a deliberate process for the Agees. Julie has made her a life book, which includes those first pictures they saw of Leighanne over the Internet. “We get it out and show her,” said Julie. “We tell her her story.”

“While we were over there, we got little things from China that you can pretty much only get in China to celebrate her ‘Gotcha Day,’” said Ben. They also celebrate Chinese New Year and her referral day, and get together with six other families in the DFW area who adopted Chinese children at the same time.

Their home also reflects the change in their family with decorations and paintings they bought while in China.

Julie, 34, is a full-time, stay-at-home mother, and a part-time Pampered Chef consultant. Ben, 37, is a computer consultant for Castlemark Consulting, Inc. in Dallas. They have lived in Fort Worth for six years. A master of divinity graduate from Southwestern Seminary, Ben also volunteers as the director for International Care, Inc. (ICARE) which provides matching grants and tools to help families raise money for international adoptions. He plans to work for ICARE full-time when the fledging organization has enough support to pay for administration.

The couple is in the process of adopting another orphan, this time a teenager who is also Asian, from Kazakhstan.