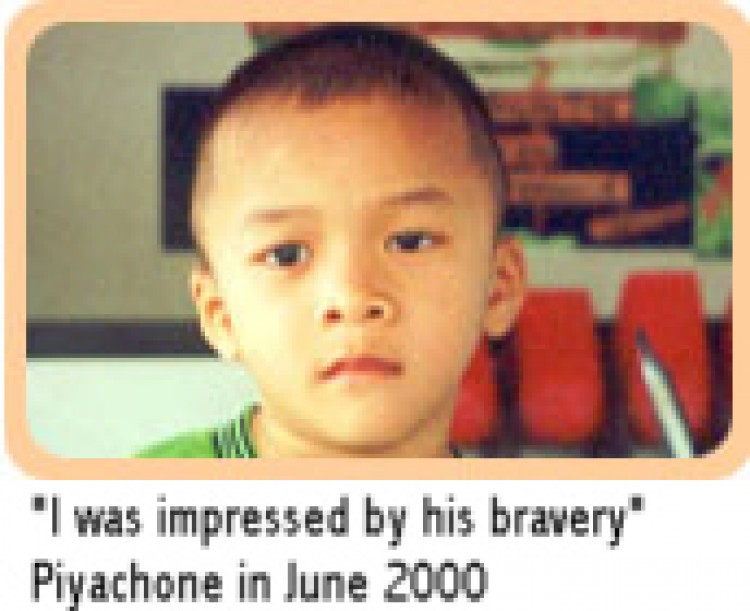 When my husband, John, and I decided to adopt a fourth child through Family Finders, we knew we wanted a boy from Thailand, and we had some ideas about his age and special needs. We reviewed medical records and videos, and easily narrowed the choice down to three boys. At that point I was at a complete loss as to which might be our son. But John's eyes would sparkle every time we watched Piyachone’s video, and when he talked about Piyachone he already sounded like a father. I don't know if he realized it, but his choice was clear to me.

We were told Piyachone had mild cerebral palsy. We had already researched CP during two of our previous adoptions (although neither child turned out to have the disorder), and our pediatrician advised us about Piyachone's needs.

I traveled to Thailand with my best friend, while John stayed home with our other children. When Piyachone's caregivers walked him into the meeting room, I was overwhelmed with emotion. Here, finally, was my son. He was obviously very scared—quiet and shy, with eyes downcast.

I offered him toys and candy and slowly gained his trust. Eventually I was close enough to gently touch him. I was impressed by his bravery as he dutifully walked me to the room he slept in, showed me his bed, and stood stoically for pictures. He was about to leave his home, his friends, all that he had known for the past three years.

To be honest, I was taken aback by the extent of his cerebral palsy. It was much greater than we had anticipated. I was unsure about his physical and mental abilities, and doubted he could grow to be independent. For a moment, I wondered whether our family would accept him. I should have known better, though. When I called home, John reassured me that we would figure things out.

As time passed in Thailand, I began to see that Piyachone’s needs weren’t insurmountable. I discovered that he had many gifts and could teach us wonderful things. His joyous spirit and kind heart would carry him and us all through any hard times.

Still, the adjustment wasn’t easy for him. He cried frequently and had tantrums. We cut him slack when necessary—like the time in an airport restaurant on the way home when he decided to eat on the floor under the table, concealed by the tablecloth. We honored his grief for all he had lost, trying to reassure him that our family would always stay together. We played a lot, to build good new memories. We tried to give him clear ideas about boundaries and expectations.

Piyachone made greats strides in therapy. He works hard to teach his body new ways to move and is a favorite of all his therapists. Once he fell down many times a day, but now he’s learning to ice skate! Once he could barely speak (he essentially didn't talk for almost two months), but now he gets most basic words across. We finally have access to all his great ideas and feelings! This happy, joyful, easygoing child fits into our family as though he was always meant to be here. He and his little brother are inseparable—scheming and laughing, planning their future careers as firefighters or some other type of rescue workers. The rest of us adore Piyachone, too, and he has pretty typical relationships with his two older sisters.

We’ve learned so much from Piyachone. He helped us look beyond a person's physical abilities and see the precious spirit inside. He taught us to not just talk about acceptance, but to do it, to feel it in our hearts. Like all children, Piyachone has brought us unexpected challenges, surprises, and endless gifts.