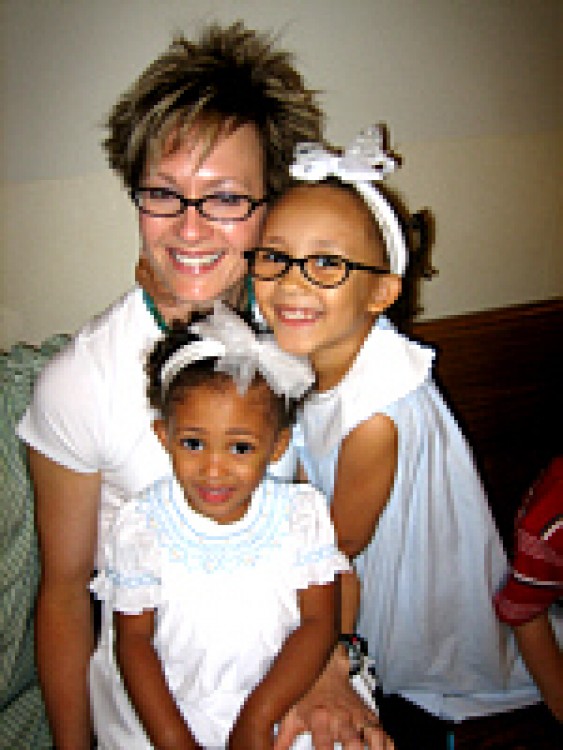 It was time for Claudine's bath.  She began to rummage around her basket under the bathroom sink and at last, found the item for which she was searching.  It was an almost empty tube of Hello Kitty bath gel that I had taken to Haiti the first time I visited her.

It is not unusual for her to hold on to things.  This practice is not to the extreme of hoarding, a behavior common among newly adopted children, but she does see treasures in the everyday things that some children would deem worthless.

She eagerly climbed into the tub, opened the tube and squeezed most of the remaining gel onto her wash cloth. Then, she held it to her nose.

"This smells like Haiti," she said. "It smells like the first time you came to visit me."

"You remember that?" I asked

"Yes," she replied with a soft smile. "I remember."

Then, inhaling the soft, sweet, floral fragrance, I too returned to Haiti and my heart was filled with homesick longing.

Suddenly the small tube of bath gel seemed precious and I felt sorry it was almost empty.  It seemed that when it was gone, a little bit more of Haiti would be lost from us as well.  Already, we both struggled to remember our Creole and as the months drifted by I found my Haitian daughter much preferred the taste of pizza to beans and rice.

A shadow of disquiet and sadness crossed her face as I shut off the water and wrapped her in a fluffy, white towel.  Her eyes sought mine and fear darted through them as she realized part of her was fading away and although she gladly embraced the present, something innate within her also needed to touch the past.

"Mommy, tell me about Haiti," she said "Tell me the story about how I came home."

And so I began.  The story is a long one but she stood beside me listening to every word as I held my youngest daughter, Roseline, on my lap to brush her hair free of tangles and coax it into afro-puffs.  I continued the story as I brushed Roseline's teeth and somewhere along the way my youngest son, Jeremiah, was drawn to it as well.  We sat down in the floor and told the story still.  There were no pictures but my three little ones' attention never waned.

Sadness flooded Claudine's face as I told her about how we could not obtain the passport and that we feared we would not be able to bring her home.  Her face lit with wonder and fulfillment when I told her about her birth parent's call to the orphanage director while we were sitting in the passport office because he wanted to know if his girls had gone.

I told her about how I had a decision to make that morning when all seemed lost.  Would I give in to despair?  Would I

choose to believe God was still able to work miracles?  Her eyes watched my face intently to discern whether I had ever given up hope and then her face broke into a smile when I told her my faith held firm.

Together, we revisited our joy when we finally held the passport in our hands.  Side by side, we waded back through the sorrow of her good-byes.

I told the story until the plane landed in Tennessee but wanted to end it there because the hour was late and the children needed to go to bed.

"But, Mommy," she said "Tell me about coming home."

And I did not stop until she was settled safely in bed beside me that first night.

After the story, it was time for prayer and when it was Claudine's turn, the English might have been broken in places but I knew God's ear was attentive as she said,

"Thank you God, for my family. Thank you for this house, these toys, these books and my bed. And thank you God, that I came home.

Sherri Gragg and her husband Michael live in Franklin, Tennessee with their 5 children. Sherri's blog can be found at: www.everydaymiracle.wordpress.com