Meeting Our Children for the First Time

What Happens to His Gift When He Ages Out? 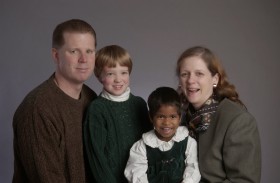 Standing in the Middle: An India Adoption Story

When you’re young, you are told to always stay on the right side of the road when driving, walking or riding a bike. That way, the flow of people will always stay the same — causing the traffic to run more smoothly. What if in life, staying on one side or the other wouldn’t help you in the long run, but would instead make you more confused as to what direction you’re heading? For me, life is a busy Indian road and I am standing in the middle of it. I think people will go one way and keep the flow going, but then something happens to disrupt this traffic. Cars get off course and change directions, and I’m just standing in the middle watching others as they pass by, confused and clueless. Culture is like that sometimes. It can begin one way when you’re little, but as you grow up your cultural identity switches directions, leaving you confused. I chose, however, to stand in the middle of that busy Indian road. I won’t let my cultural identity switch directions.

An expected part of Indian culture is that you should be married before you have a child. Otherwise, it doesn’t reflect very well on the family. My birth parents didn’t follow this custom. My biological dad left my birth mom, Minnie, when she was pregnant with me, and so she had to make the difficult decision to give me up. I believe that this is also part of my cultural identity. I spent the next three years in an orphanage, where I was exposed to a different type of culture than what others may have experienced. I will never forget that I lived in an orphanage, nor the people in it. I will also never forget the important events in my life that affected my cultural identity.

As a child, you don’t know what the shifting point is that can make your culture start to change directions. It can be little things or it can be a big thing. In my case, it was a big thing. When you’re in an orphanage and about to be adopted, the child is usually told about the family that is adopting them. The new parents will sometimes even send gifts to the child they are going to adopt. I was given a scrapbook of my whole family. In Indian culture, you call adults “auntie” and “uncle” if they aren’t your parents. It wasn’t very common for adopted kids to call their parents “dad” or “mom” right away. I was told that I would be adopted and saw photos of my parents beforehand. They prepared me so that in November 2003, when I met my new daddy, I would know exactly who he was.

The day finally arrived and there I was, a little 20-pound 3-year-old, waiting for my family to come take me. Having been in two orphanages and a foster home, I was ready for a family. In my little white capris, a black and white checkered shirt and my sweet black Velcro shoes, I was looking good. A man and an older lady came into the room and of course I immediately knew who the man was. As all these kids ran up to the man screaming and wanting to meet him, he heard my tiny voice saying, “Daddy, Daddy!” It was so unusual for kids to call the adults “mom” or “dad,” but there I was shouting “Daddy” at this man. I knew my life was going to change when as he left that first day, he asked me if I wanted to go with him. At first I said no because this was where I had been living for the past year. Why would I go anywhere with someone new? Right before he left, though, I had finally made a decision. I said yes and went with him and the other lady who was my grandma. This was the moment when my culture began to shift directions. I wouldn’t let it shift completely, though. I would stay in the middle of that road, keeping Indian culture a part of my identity.

Here I am 11 years later, asking myself why I am standing in the middle of this busy Indian road. But the more I think about it, the more I have an answer. After going to many adoption agency campouts and culture days, and even going back to India in 2010, I realize that I have more parts of Indian culture than I thought that help keep me in the middle. When I moved away from India to America, I wasn’t able to learn much about Indian culture, so I would go to campouts with friends that I knew from the orphanage. These campouts were two-to-three day camps that let you connect with all the kids adopted through Holt. Together, we would learn about each other and each other’s birth culture. That didn’t show me much about Indian culture, though, since not everyone was from India. So I also attended culture days. This was one day a year that Indian adoptees would get together to experience Indian food, music, dance and crafts. I loved all of these aspects of Indian culture. When I visited India in 2010, I got to meet people, try the foods they eat and visit their markets. I got to get henna designs on my arms. I got to experience many other things that were a part of Indian culture and also a part of me. All of these experiences helped me plant my feet further and further into the road I was on and stay in the middle, helping me keep my Indian culture a part of my identity.

Even though I’m an American citizen now, I’m staying in the middle of that busy Indian road. I am keeping my place in my Indian culture. My views have not changed and neither have my beliefs. I’m standing in the middle. Next time you see the flow of traffic going all directions, know that it’s okay to simply stand in the middle and stay there. If what you know is starting to shift directions, plant your feet firmly on the ground and keep your place because your cultural identity is your own — don’t lose it. After all, what would life be like if some people didn’t stand in the middle of a busy Indian road?