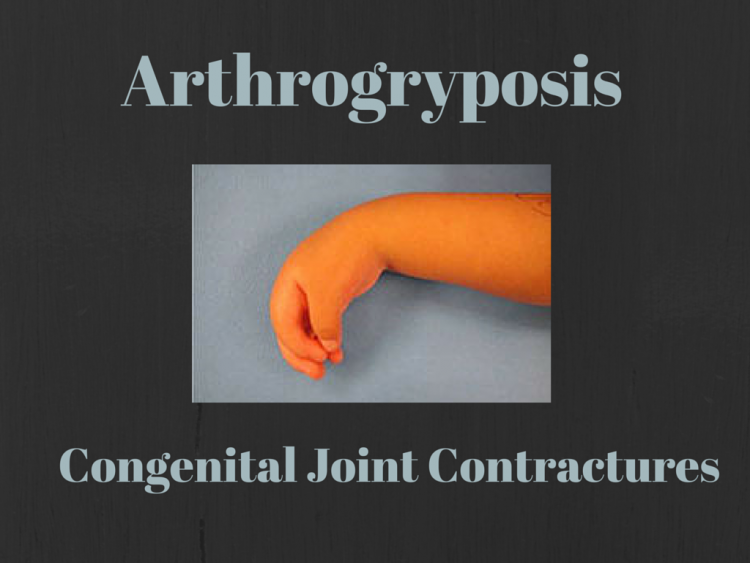 Arthrogryposis (AMC) is a rare group of disorders that describes multiple joint contractures or limitations of the joints in the body.

First, AMC is rare though we can see it from all ethnicities. In AMC, the joints of the body have limitations in motion and can affect multiple parts of the body and are not limited to one side of the body. This is present from birth and it is considered “stable” meaning it doesn’t typically get worse during the lifetime of a patient. Therapies can help but there are no current cures.

Classic arthrogryposis is not hereditary; it affects multiple joints in the body.

Syndromic arthrogryposis means that the child has a syndrome, and as part of the syndrome, limitations in motion exist. The genetics depends on which syndrome is present along with the arthrogryposis

Some of the distinguishing points are that the newborn’s hands are clenched tightly in a fist with overlapping fingers. The feet are often in an abnormal position, an example is clubfoot (equinovarus) or flatfoot (calcaneovalgus) and the hips, knees and shoulders can be dislocated or in an abnormal position as well.

There are multiple potential causes for the joint limitations in AMC including nerve problems or abnormalities, inherent muscle/joint problems or syndromes, or if the fetus is too crowded while in utero (before birth).

Because there are numerous causes for AMC, specialized imaging studies, physical exam and muscle biopsy or electromyographic as well as genetic studies are often needed to clarify the diagnosis and are almost never possible abroad. The final diagnosis or underlying cause may not be known until a child can come to the USA and have a thorough workup by specialists. Children and then adults with AMC will move through the world differently than other people so they will need understanding and support from their family. For children with classic arthrogryposis, surgery is commonly needed (can be multiple) and can assist the function of different joints.2 However most studies quote a normal to above normal intelligence and full ability for independence and employment as adults.3

Arthrogryposis Multiplex Congenita: A lifelong syndrome that causes limitation in movement due to “locked” joints.

May improve with therapies and/or surgeries but no current cure.

Can lead full lives and as a group, has normal intelligence

Complicated potential causes and many cannot be worked up prior to child coming to the USA- will need workup once they come home. The Pros of the Adoption Process