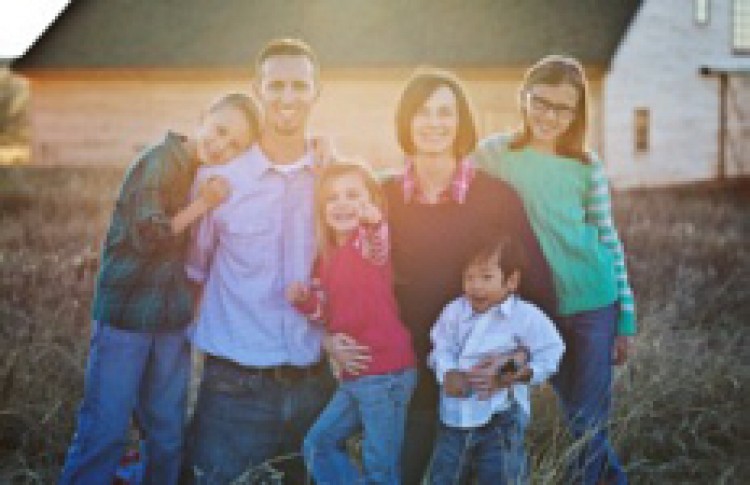 This article was originally published March 31, 2014.  More than ever, families are needed for waiting toddlers in South Korea!

Adoption was part of Jayna Shepherd's life from Day One.

"I grew up in a family of 10 siblings. Eight were adopted from various countries: Vietnam, Korea, Romania, Guatemala, and the USA," Shepherd explained. "My sister who was closest to me was a Dillon International Korea adoptee, and I knew one day I would adopt a child from Korea."

After 10 years of marriage, three biological children and a heartbreaking miscarriage, Shepherd and her husband, Casey, knew the time had come to move forward with that childhood plan. "We felt God call us to continue building our family and that it was time to move forward with adoption," the Oklahoma City-area mom said.

And along came Liam.

"We received his referral in January 2012. We knew he was the one for us. It was love at first sight," Shepherd recalled.

Liam, whose Korean name (KeonWoo) means "Heaven Help," was born on the approximate date that Jayna would have delivered the child lost through
miscarriage. "It was so wonderful to see what God had in store for us," she said.

On the other side of the state, at around the same time, the Brannon family, also in the process to adopt a child from Korea, was receiving some good news of their own.

"We were expecting to receive a referral soon and I called our agency's program director to check in," Stacy Brannon recalled. "She told me my timing was perfect: she was just about to call me with a referral."

Brannon and her husband, Kyle, rushed over to the Dillon office to learn all about Bae (pronounced "Bay"). "It was so amazing leaving the office that day knowing he was the child God had for us," Brannon said.

Shortly thereafter, both couples experienced the reality of a truism in intercountry adoption: Flexibility is needed to weather unexpected changes.

The adoption process slowed significantly as the Korean government worked to restructure the program in the wake of the country's new adoption law.

The families, though adopting through the oldest organized international adoption program operating in the U.S., became "pioneers" of sorts, navigating a new type of Korean adoption process complete with court appearances and two trips to their children's birth country.

Receiving monthly updates on Liam, connecting with other adoptive families online and staying busy with their three other children also eased the tension of waiting, Casey Shepherd added.

Although they had not initially planned on making two trips to Korea, the Brannons now feel that doing so gave them a greater appreciation of their son's birth country.

"South Korea is a very clean, beautiful and interesting country," Stacy Brannon explained. "It was a unique and humbling experience to see where Bae was from."

The extra time in Korea also allowed for meetings with Bae's foster family and the staff at Eastern Social Welfare Society, Dillon's partner agency in Seoul. "Bae was a little shy at first, but you could tell he recognized us from pictures," Brannon said. "You could tell how much his foster family loved him. His foster father especially was a very kind man."

The Shepherds travel afforded them a unique "full-circle" opportunity: "My sister who was adopted from Korea accompanied us on our first trip. The day we boarded the plane was 31 years to the day that my sister arrived home from Korea," Jayna Shepherd recalled.

Both families arrived home with their sons this past October and their households now bustle with the joy and energy only 2-year-old boys can possess.
Bae's a kind and easy-going kid who loves to give kisses and show concern for others.

Liam's a happy guy who likes to joke around. "He was a bit shy around new people at first," Casey Shepherd said. "But now he loves his grandparents and is busy taking on his brother and sisters."

The trials of waiting were rapidly eclipsed by the delight of having their sons at home.

"When you go through the waiting time, it can seem like there's no end in sight," Brannon said. "But when you have that child in your arms, it's SO worth it."

"Patience pays off," Jayna Shepherd said. "When you hold your child in your arms, the wait melts away."

Contribited by Dillon International. The Korean Adoption program currently has several toddler-age children who urgently need a family's love. Although change is constantly present in inter-country adoption, the fact that children need families remains unchanged. Adopting from Korea is a great way to build a family.