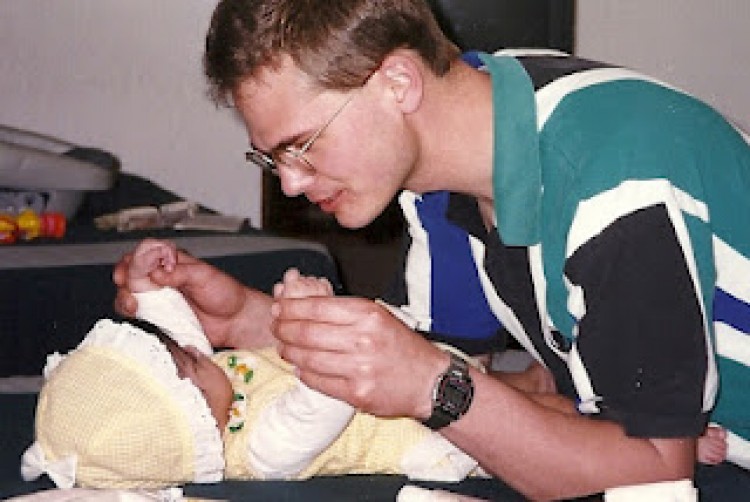 Shielding my eyes in horror whenever Caroline Ingalls labored to give birth on Little House on the Prairie, I would beg my mom to mute the sound; I owe my desire to adopt to her refusal. Good reasons to build families through adoption abound, but for me, it all began with Ma.

Randy was washing clothes in our dormitory laundry room when we met my freshman year at Michigan State. Solicitous, polite, and a patient listener, he was almost perfect.  His only flaw was a doozy, though: he did not share my desire to adopt.  I badgered him mercilessly, but no matter how often we discussed it, he was adamant he couldn't love "someone else's kid."  I took a risk and married him anyway. After graduation, we began talking more seriously about children, but Randy remained mired in his opposition to adopting; he was sure he could only love his "own" offspring.

One Sunday in late 1996, a family from our church arrived carrying their new three-year-old daughter from India.  At her baptism a few weeks later, our minister preached about adoption, which I'd never considered a religious subject.  But as he weaved into his homily plenteous Biblical examples of God's compassion for orphans, he opined that since all Christians were themselves adopted by God, more should thank Him by adopting.  Inspired, I ignored the impulse to plant my elbow in Randy's ribs.

Shortly thereafter, I taped a Turning Point special on Romanian adoption.  The next day, I entreated Randy to watch it with me, and not to refuse the request I'd make afterward until he'd prayed for at least one week.  While he viewed the episode with seeming indifference, he kept his vow of silence when I asked again about adopting.  Six days passed; then January 23, 1997, he confessed he'd been considering adoption since the sermon, and had already realized it was in our future a week before Turning Point.

I danced from the mailbox to my house a few days later when documents from the local adoption agency arrived.  After extensive discussion, we choose Guatemala as our country.   Our families were thrilled, though my mother-in-law could not understand our decision.  "Can't you have your own kids?" she prodded, as if no one would adopt if they didn't have to.  I rejoiced at Randy's complete conversion when he pretended not to understand the question.  As she elaborated, he corrected her that the child would be our own.

Guatemala's mañana culture consigned us to a nearly two-year wait for a referral.  In October 1998, our social worker phoned me at work to announce a baby girl, Nicole, had been chosen for us.  Randy left work immediately for the photos, but promised not to look until I got home.  When they heard the news, my parents rushed over to see their first grandchild, then treated us to a celebratory dinner; my mom kissed Nicole's photo before leaving that night.  Randy's parents lived in Iowa, and drove to see the pictures a few days later.

We flew to Guatemala City to meet our daughter and her foster family 27 months after deciding to adopt.  After glasses of lemonade, which we guzzled before the ice could melt, the foster mother presented Nicole to us.  Sleeping when she was placed in my arms, she opened huge eyes, shook her head, blinked, and looked into my face, as if yearning to learn who her mama would be.  She was adorable in her yellow dress, with dark eyes and curly, doll-like hair.  Randy was smitten, overcome to see a real child gazing at him, and craving his love and attention.

Guatemala required two trips, and we tormented our agency with calls as we awaited permission for our second visit.   A day before Nicole's first birthday, she was in our arms forever.  Arriving home, a festive throng assembled on our lawn to greet us. As we turned down our street, my uncle, a Grand Rapids policeman, veered out in front of us to escort us with flashing lights and screeching siren.  After we showed the baby her new room, my mom spread a picnic feast outside.  My mother-in-law carried Nicole everywhere; when the time came for her return to Iowa, she sent my father-in-law home alone, and told him to come back in a week.

Two years later, it was Randy's idea to look to China for a child. When our agency warned us of an impending holdup due to bird flu, Randy and I left on vacation.  Checking in for our flight in Detroit, the clerk told us to call home.  Nicole, 4, answered, "Hi, Mama!  Adoption's ready!"

I phoned the agency, and they read little Jin Su Li's documents to me.  They'd e-mailed her photo, but in the era predating ubiquitous WiFi, we had to fly to Philadelphia before we could access the Internet.  In our giddiness, $7 for five minutes online seemed a bargain when we saw our precious daughter in her padded suit, with an incongruous poolside backdrop. We signed acceptance documents in the airport, and US Airways staff faxed them to the agency for us.

Traveling with a group of families getting daughters from the same province, we arrived in Beijing two months later.  In a stifling room, as children were presented alphabetically by adoptive family surname, we rejoiced at being D's.  Our daughter, now named Emily, weighed 12 pounds at 11 months, and was starved for love. As we cradled her, she arched backward at the waist, desperate to move as far from us as possible.  She didn't smile once, and sobbed almost the entire trip. Randy cuddled her constantly; my nerves could scarcely suffer the incessant wailing. Even new parents in our group started offering suggestions which, as an experienced mom, galled me immensely.  At night, Randy paced the hallway with her, showing her things from our high rise hotel overlooking the Gan River.  Whispering gently, holding her close, he trusted the crying would cease; he reassured me that once she figured out we weren't leaving, she would love us back.

As our week in China progressed, Emily hardly warmed up, though her active rebuff of us subsided.  Borrowing a stroller from our hotel, we wandered the streets on excursions we dubbed "cultural tours." She stopped crying during the tours, so we went out daily.  On those riveting walks, we witnessed the most fascinating sights we'd ever seen.  The day before our departure home, Randy clapped as Emily rolled over, garnering a half-hearted clap-clap in imitation.  It was her first interaction with us, and a most glorious memory.  After our trip, our family welcomed us with signs, balloons, and cake at the airport. When we strapped Emily into her car seat for the ride home, Nicole bounced in beside her.  "It's very fun to have a sister," she chirped, as Emily's first smile crossed her face.

Only a few weeks home from China, we had no business attending an adoption fair, but I went anyway and met a coordinator for the Lighthouse Project.  She detailed their efforts with older child adoption, my lifelong passion.  While the resultant path was circuitous, I coordinated my first Lighthouse Project hosting trip out of that serendipitous meeting, ultimately deciding to adopt a sibling group. Despite expeditious work on the adoption, obstacles repeatedly arose; eventually, Lighthouse Project director Hope asked us to consider switching regions. Though we refused, after an unusually despondent message from me, Hope e-mailed a photo of another sibling group.  I was initially annoyed, but downloaded the photo. With dial-up Internet, it opened just a few lines at a time, but by the time the freckles on the little girl's cheeks appeared, I was captivated.  Randy concurred.

Five weeks later, we were in Russia. When we entered our hotel's lobby, Julia, 8, and Michael, 6, were on a couch before us. Randy especially was appalled that such little ones had no parents caring for them, and wondered what could possibly have been more important to them than the two.  No one introduced us, so we sat down next to them, then scooped them into our laps. They warmed to us immediately, easily accepting the toys and candy we offered.  We hadn't even left the couch when we knew they were ours.   They soaked up all the love and attention we could lavish, then did whatever necessary to earn more.  Our time with Julia and Michael was unspeakably rewarding, because they were old enough to want us.

When it was time to return the kids to their orphanage, leaving them behind was gut wrenching. We were still outside the building when Julia started sobbing; seeing this, a caretaker scolded her as we walked in the door.  Our visit did not increase our desire to leave the kids there. The building housed Julia's school, and she sat at her desk for a teary-eyed photo.  Witnessing this, Randy implored me to "pull out all the stops" to get the kids home quickly.

Back at the hotel before leaving on the train for Moscow, it was distressingly quiet in the cafe where we had shared all our meals. Reminiscing about the blessed commotion the last time we ate here, I broke down, then Randy followed.  We'd blown through all the napkins on the table, and were puffy-eyed, red-faced messes when our server arrived.  Though he'd seen us with the kids several times, he was perplexed about why we were so distraught.

We rushed to finish our process, returning to Russia in early 2006.  Back at the orphanage, we waited in the director's office for the kids.  Growing impatient at the protracted delay, we opened the office door to look into the hallway; right then, Michael was striding down the hall.  Seeing us, he exploded into a run, leaping joyously into Randy's arms.  That memory burns in our hearts, bringing a smile to both of us whenever we recall it.  Julia lagged behind, torn over leaving the teacher she lived with.

During the next weeks in Moscow, we anxiously anticipated gathering our entire brood under one roof at last.  After 25 days in Russia, a crowd cheered our final arrival home. Three countries and four children later, we were a family, in every sense of the word.

Now six years have come and gone, yet after all of our adoptions, one thing hasn't changed: Randy still can't love someone else's kid. He’s far too busy loving his own.

Learn more about Adoption from Russia

When Your Toddler Rejects You