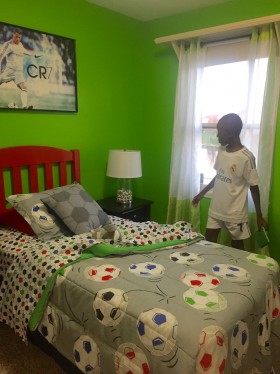 One simple step towards building an attachment with your older adopted child is letting him or her decorate their own bedroom. As unimportant as this may seem in this lengthy and often complicated process of adoption, it is actually vital to developing their sense of belonging in your home!

Imagine that you have been moved, most of the time unwillingly, from place to place, finally ending up in an impersonal orphanage. Decisions have always been made for you by someone else. You have always had to accept what was presented to you….No Choices Ever! Your ideas and preferences never mattered to other people; you never felt like you really belonged. You feel “mismatched” to your environment. Now, here you are in a big room with look-alike beds and generically painted walls. This isn’t you at all; you are more than one of hundreds. You feel lost.

Imagine now that you just arrived at your new home in the USA. Your parents proudly escort you to your new blue bedroom filled to the brim with boating decorations—anchors, oars, stars, sailboats. They even put stars on the ceiling. What the heck? There is also a large bookshelf shaped like a boat. You hope it doesn’t fall over on you because it is so tall. There are so many colored pillows on the twin bed you don’t think there is enough room for you to sleep. This is weird, you think to yourself. Who needs that many pillows? And they—your new parents—are beaming with pride and excitement! They have no idea you hate the color blue, you’ve never even been near a boat or the water, and those stars on the ceiling are scary. You seriously don’t belong here either!

The hallmarks of adolescence in general are teenage independence and forming an identity.

This is even a harder process for adopted teens because someone has always made decisions for them, both large and small. They have never had the opportunity to exercise their own voice. By giving your older child the opportunity to express himself, incorporate items he enjoys and demonstrate his individuality, you help him cement his feelings of belonging to your family and in your home…..simply through a task as small as decorating his own room.

Give it a little time:  Children with attachment issues, and all adopted teens have these, often struggle to feel that they are truly part of their new family. They need time to assess their new environment, learn the family rules, adapt to others’ personalities, and feel somewhat comfortable expressing their own likes and dislikes. Establishing their “own space” helps an older child transition to his new home, but the child needs some time to learn how to communicate his preferences and desires to his parents in a comfortable manner.

Contain your feelings:  Your excitement as a new parent is understandable! You want to create the most beautiful and welcoming environment for your child and give him the things he never had before joining your family. However, many adopted children are not accustomed to material possessions. They will likely not express appreciation for your generosity. This is neither a reflection on you nor on your child. It is just a reality. Putting a great deal of money, time and extra effort into room preparation prior to the arrival of an older child is not needed. It may also be overwhelming for them, especially for those with sensory issues. When your child arrives, he will need “calm”, not “overstimulation”. In fact, due to their initial fears of being alone, you may temporarily have them sleeping on a mattress in your floor or find yourself sleeping in a chair in their room to help them adjust. The idea of having their own room needs to evolve.

Avoid hitting triggers: If you pre-decorate an older child’s bedroom, there’s always a chance of hitting one of their “triggers”, some color or an item that strongly reminds the child of an early traumatic event or a loss. Maybe the color purple reminds the child of the color of multiple bruises he received repeatedly from an abusive parent. Maybe a brown stuffed bear triggers sadness about the loss of a sibling who had a bear just like it. You will likely have no idea what your child’s triggers are until you have lived with him a while. Once you know more about your child and his past, his likes and dislikes, you can help avoid such conflicts.

Identity formation: Identity formation happens continuously as a child grows older. Let him experience the power of choice by making his own room décor decision and incorporating his personal preferences into that decision. Adopted teens need to be able to claim their rooms as their own. They need to express themselves and infuse their own personality quirks into their environment. They are still trying to figure out their own identities—where they belong and who they are—and part of that self-discovery includes trying on different personalities, emulating various athletes or celebrities, fitting in with their peers, and demonstrating independent tastes. His room may not be what you would choose, but it is comfortable and welcoming to your child.

Culture and Memories: Older children experience a greater sense of loss because they have been in transition longer. Your child will need to connect to his past and explore his ethnicity and culture. He will need to incorporate this into his life and his environment, both visibly and in thought. His memories are part of his identity and he needs to recall them to make sense of his life. To truly become a part of his new family, he needs to grieve the loss of his old one. Your child may want cultural reminders-books, pictures, clothing, toys- in his room. He may want a picture of his birth family as a reminder of his past personal history. It is important for him to feel that his past, his culture and his birth family are respected and valued. If you value and respect those things and allow them to be displayed in your home, you demonstrate that you value and respect him.

A Bonding Activity: Helping your child plan and prepare his new room can be a tremendous bonding activity between you and your child! You will be moving in sync with your child as well as nurturing him. You will increase communication by listening to each other’s ideas and exchanging information. You help teach reasoning and cooperation by explaining what is and is not possible to do in the room. Your child feels like a part of the family by being involved in a worthwhile household project. Calm and reasonable discussion models proper family rules and helps to build trust. You show your child acceptance, support and empathy by allowing him to incorporate his preferences into the design. Involvement tempers his need for control and builds respect for you. He learns flexibility and patience with the process and he begins to feel he can safely be himself around you.

Praise goes a long way:  Be sure to praise your child for his efforts and the final product! This has a great impact on building self-esteem and self-confidence. Assure him how glad you are to have him as a part of your family. He needs to know he is special and valued. Your compassion and support will help increase his feelings of attachment to you, his home and his new family.

For a child who is accustomed to not belonging anywhere, being given both permission and support to create his own home environment is huge! Decorating his own bedroom and incorporating his own personal preferences is an opportunity for building identity and learning to express himself in a positive manner. Most importantly, it is a window to his soul, where you can meet your child halfway, begin to fully understand him and nurture the beginnings of his emerging independence. Who knew decorating a bedroom with your child could accomplish so much?