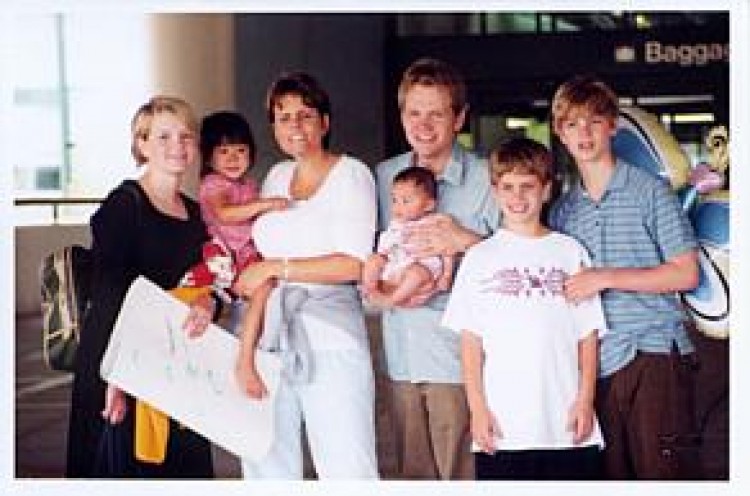 The baby girl, Stevey Joy, was waiting in an orphanage in the Hunan province. Their older daughter, Shaohannah, now 4, had been adopted in the same province three years before.

Plans were being made for the Chapmans to leave their home in the rolling hills of Williamson County for China in June. ''My wife was really worried about getting everything together in time,'' he says.

But on April 28, ''We got an e-mail telling us to cancel those plans. It said 'SARS is going to close down the provinces.' ''

Their daughter was stranded.

Others might have wilted in the face of the deadly SARS virus.

''My wife has the spirit of Rambo,'' Chapman says, shaking his head. ''To her this was sort of like saying, 'Your daughter is in a war zone, so you can't come over because we're afraid you will get shot. Meanwhile your daughter is getting shot at.' ''

Mary Beth Chapman was on a plane to China in five hours. The goal: Get there immediately, before the provinces closed; get her hands on her baby and start the adoption process so she could get the baby out before she became a victim of SARS and before she became trapped in a dark orphanage.

The plan was for the paperwork, at that point in Washington at Chapman's Shaohannah's Hope Foundation (an adoption assistance and advocacy group), to be completed and for Chapman to overnight it directly to his wife in China.

Problem: The SARS scare threatened the dependability and timeliness of courier deliveries in China, the nervous dad was told. Solution: A friend would fly the paperwork to Nashville and Chapman would fly it to China himself.

''I met him at the airport. I went home and packed. Got to bed at about midnight and at 4 in the morning I went to the airport to fly to China.

''My plan was for me to fly to China, give her the papers, kiss her, meet my new daughter and then get back on the plane and come home and take care of the rest of the children.''

SARS slammed the door on the quick exit plan. The window for getting his baby out before the provinces were sealed was almost shut. He knew he and Mary Beth needed to double-team. His role was to work the phones, apply friendly pressure all night long.

''On Monday morning, we started the adoption and we left on Wednesday night.''

During their adventure, the Chapmans wore masks and glasses. SARS isn't airborne, but masks kept them from touching something with their hands and transferring it into their mouths. Glasses prevented rubbing eyes with virus-laden fingers.

''It was very surreal, like being in a movie,'' Chapman says. ''But there really was a peace in the midst of it. I knew what I was doing was right: 'My life's in God's hands. We are on a mission.' ''

The Hallmark special allows Chapman to use his pulpit as a celebrity to further the cause of adoption, which he and Mary Beth embraced several years ago thanks to their daughter, Emily, now 17.

''Our hearts got zapped when we least expected it,'' he says, recalling how the Chapman family first entered the world of adoption. ''It is an incredible, miraculous thing.''

Emily Chapman herself experienced the feeling at age 11 while on a mission trip to Haiti with her mother: ''Mary Beth says she just saw something change in Emily's heart in regards to kids and those in different cultures.''

It took mom and pop a bit of time to come around.

''We used to brag that our kids will be out of the nest and we'll still be young. We'll be off to new adventures in life. Now, look at me. I'm 40 years old and I have a 1-year-old at home.''

He smiles as he ponders his conversion from hesitant adoptive parent to adoption proselytizer.

''I can speak to having children who are biologically mine, who have my genes. I have a son who plays a guitar. I have another who plays sports; I don't know where in the gene pool that comes from.