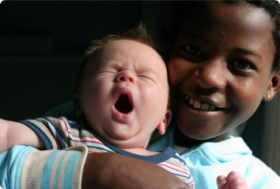 Our referral picture read “Yosef,” but to us the little Ethiopian boy in the photo was our Camdyn.

He was Camdyn until shortly before we traveled to meet him. Now, nearly nine years removed from that time, I’m eternally grateful for having kept my son’s given name.

I keenly remember when we changed our minds. While attending a seminar for soon-to-be adoptive families a month prior to our departure to Ethiopia, the issue of keeping given names first came up.

The seminar concluded with a native Ethiopian and University of Minnesota professor providing a speech about a variety of Ethiopian-centric topics—the view of American adoptions in Ethiopia, culture, religion, what to wear and other helpful traveling tidbits.

The gentleman was eloquent and stuck to the facts—until the very end of his lecture.

His voice began to crack with emotion as his prepared remarks began to wind down. With eyes glistening, he scanned the audience and said, “I will only give you one piece of concrete advice. Please, keep your child’s given name.”

I remember many of the topics he discussed in general but can recall that comment verbatim. That sentence stuck with me.

Despite being moved by the speech’s ending, we did not plan on deviating from our intent to rename our son at first. We had too much else to worry about to add that to the list of last-minute worries.

As we drove home that evening, though, my wife and I could not ignore the professor’s impassioned words. Camdyn was no longer—our son is Yosef.

I’ll be forever glad we reconsidered.

My son’s given name is a daily reminder of the connection he shares to a mother he may never meet, in a country he only knows from pictures. His name forever intertwines his Ethiopian roots into our family tree.

It’s not easy to keep my son connected to his home country so many years after adoption.

After returning from Ethiopia it was easy to feel a kindred spirit to my son’s country. The smell of the Addis Ababa diesel-filled air was fresh in our memories. The sting of seeing the plight of the people on the countryside still felt real.

After nine years in America with Yosef, the memory of the smell has faded. The plight of the Ethiopian people, although impossible to forget, seems more distant.

Hearing my son’s name in a small way reconnects us to Ethiopia—exactly as the professor said it would.

Please don’t misunderstand, I’m not criticizing families that make the choice to rename their children. The fact is, I would have done so if not for the seminar and emotional speech I heard.

I do believe that as adopted kids grow up, the instinctual attachment to their home country naturally diminishes. They become fully “American-ized” very quickly.

Camdyn would have been a great American kid but Yosef is forever a proud Ethiopian who happens to now live in America.