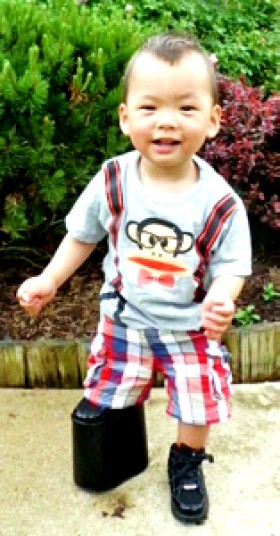 By the time my husband and I made the decision to adopt, I had already spent years looking at children's photos on waiting children websites.

I had no particular child in mind, as we weren't settled on which country we would adopt from. We decided to move forward with adoption by having our homestudy done. The social worker that we were assigned did a wonderful job of exploring our expectations, flexibility, hopes, plans, and options. She asked us MANY questions, but I distinctly remember her asking us which special needs we were open to. As first time parents, we opted to list all the minor correctable needs, as well as some scarier ones that we felt we could manage. I can still hear myself telling the social worker that we "weren't open to any special need that impaired walking," because we were a very athletic and on the go family.

After that first meeting, I went online to look at children's profiles on Rainbow Kids Adoption Advocacy site. I came across a photo of a baby boy wearing a burgundy knit sweater who had the face of a cherub. With all of the questions and answers from the days meeting running through my mind, I gazed at his sweet face and thought of how lucky his future family would be to have him in their lives. He was listed as having a limb difference, one in which one of his legs and hip were affected. Exactly what we said we were NOT open to as far as special needs goes.

His sweet face with rosebud lips stuck in my head.

I knew his need was not what we felt comfortable with, but my mind kept jumping back to thoughts of him. When I spoke to my husband Jeff about him, he said that I could at least inquire about him through the agency listed. I e-mailed the agency and after filling out a few questionnaire forms for contact purposes we received "Henry's" file.

Jeff and I talked about "Henry" and looked over his medical information. This part of the adoption is such a leap of faith as a family can never truly know everything about the child's history and medical background. The paperwork was moderately thorough, but you can't know, really understand, a child's condition who is located on another continent.

I e-mailed the agency again and asked if anyone else had inquired about "Henry" and if so, did they have any more information about him? It turned out that a family in Canada had indeed been presented "Henry's" file, but chose not to proceed. They had Doctor who specialized in international adotpion look over his file. The family said that they would be glad to share it with us.

When we read the file we understood perhaps why the family chose not to proceed with the adoption of "Henry's". It seems that "Henry" was also diagnosed with Microcephaly which the Dr. pointed out could indicate brain trauma or abnormalities. At only 8-month's of age, it wasn't possible to have 100% clarity on Henry's condition.

After feeling that we had obtained as much information as was available, my husband and I talked more about "Henry". We decided to consult with a few people that we knew in the medical field, reaching out to anyone who could help us make this very difficult decision. We sent off photos and his file, and waited.

As it turned out, Henry was developmentally right on target. Despite his difficult beginning, he was a fighter and his spirit and determination lit him up within. Despite there being no guarantees, my husband and I began to have the feeling that this little boy was meant for our family.

Our agency was able to lock his file for us, and by the time our next home study was done we had listed his special needs and how we could best meet them. I can't explain how we went from knowing what we didn't want and didn't think we could handle to knowing that we DID want this child and that we COULD handle his needs.

"Henry", now our precious Liam, has been home with us for 2 months. Doctors have found that his PFFD (Proximal Femoral Focal Deficiency) is the most severe kind. In fact, it turns out that he has no hip ball or socket making any chance of his walking right now very difficult indeed. Difficult but not impossible.

Liam has just received his first pair of shoes with a 5.5 inch lift and he has taken his first unassisted steps! How we ever doubted that Liam would be able to keep up with us is beyond me, as it is US that are trying to keep up with our marvelous and wonderfully made son. He is filled with light and happiness and we can't imagine our lives without this magnificent little boy.

Without RainbowKids we would never have found our son, our pride and joy!