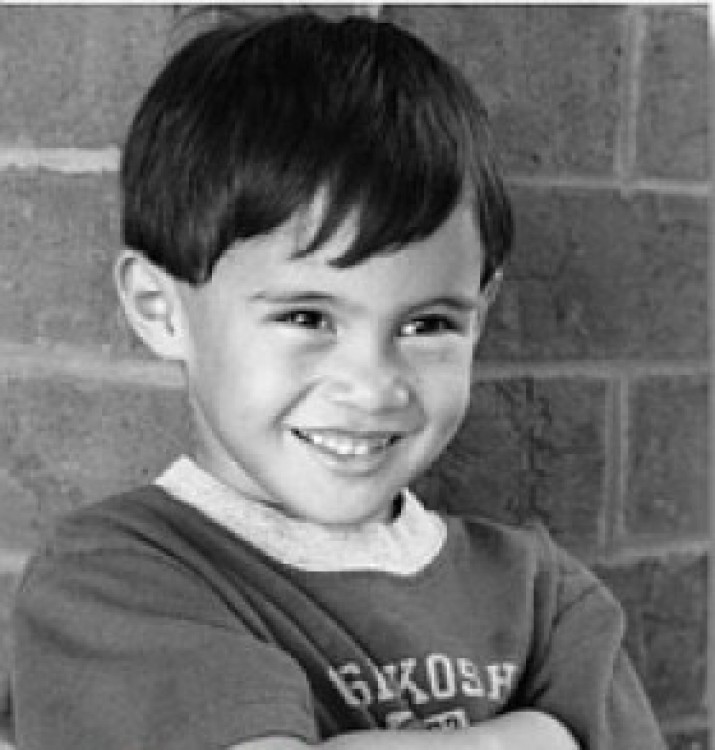 I first fell in love with his photo, that of a grinning one-year-old sitting in a stroller. I saw it on a Waiting Child listing. In the descriptive information I saw the words "ambiguous genitalia," followed by "an outgoing child who smiles constantly." I didn't really know much about ambiguous genitalia . At the time, we had no immediate plans to adopt, so I just casually read a little more on the topic. And I kept returning to that adorable photo. Two months later, we requested his file.

The file itself contained very little information. He sounded healthy. We could see from photos and read from the description that his genitalia was different from that of other boys. We slowly started thinking about adoption.

We received a video, filmed when he about 18 months old. His obvious "cuteness factor", followed by what sounded like a delightful personality, trumped everything else. But I still wasn't convinced that he was my child. His special need was so different . Did we have what it would take to raise a child whose gender may not be clear? What if we raised him as a boy and he grew up and told us we'd made the wrong choice? How would people perceive him? Would he get the support he needed as he grew? How could we really know the correct gender in which to raise him? We didn't say yes, but did ask our agency to let us know if any other families decided to go forward; by this time he'd been on a photolisting for about a year and we'd been tracking him for about five months.

I started to ask questions of many people: parents of children with difference of sexual development (DSD), adults with DSDs, and professionals, both medical and mental health. It didn't take much research to convince me of several things:

We told our agency we were ready to move forward.

Then I panicked, called them back, and put the process on hold while I contacted several specialists, including a pediatric urologist and a pediatric endocrinologist. The endocrinologist filled in a lot of gaps, explaining several possible diagnoses that could have led to his condition. Both doctors told us that they would do further testing after our son arrived home.

Meanwhile, we received the results of an ultrasound and a chromosome test that a previous prospective family had ordered. One test revealed XY chromosomes that matched the gender in which he was being raised. The ultrasound revealed no female organs. But our endocrinologist explained that a lot more goes into gender than chromosomes or organs. She explained how a person's brain "feels" male or female based on in-utero exposure to hormones. We learned that we could not rely on his chromosome test or his internal/external organs to completely determine gender. ** Our doctors told us that they would work with us to make the best possible decision on his gender after he arrived home. While this was a little scary, it was also reassuring. I felt like I finally understood enough about the condition to make a decision. We accepted his referral.

During our wait, I still worried a bit. What if we got "him" home only to be told that he should really be a "her?" What would we tell people, especially if we had to switch genders? How would people treat him? We considered not telling people we were adopting until after we arrived home and completed some initial testing. But the logistics were overwhelming. I also talked to enough adoptive families to know that changing gender post-infancy would be unusual, not unheard of, but unusual. So we happily shared the news that a son was joining our family.

Worry was a big waste of time. The moment we met our bubbly little three-year-old, we knew he was all boy. Further testing, which contradicted in-country assessments, revealed that he was born without testicles; though he'd had them initially, giving him the brain and anatomy of a boy, they'd later "vanished" in-utero.

His small phallus will grow with hormone supplements and he should lead a relatively normal adult life. Now, at age four, nothing special is required to care for our son; it is very easy to forget he was ever given the label of "special needs child." If he receives any label in the future, it will probably be "gifted." In less than a year he has mastered English, numbers, colors and letters. He devours books. And best of all? He is a happy, healthy boy, non-stop hugger, who loves life and his family. An older sister describes him as "a little ray of sunshine."

I'm aware that many consider this special need a "mental health" condition, assuming that children with DSDs will grow up to be unhappy adults. Previous generations of adults with DSDs were raised in an era where children were often surgically altered at very young ages to force them to look like one gender or another. As professionals and parents understand the importance of waiting to make irreversible surgical decisions, the future looks different for those with DSDs. Professionals estimate that 1 in 1000-2000 births are affected by some type of DSD. While it's common, it's also the kind of private information that people only share on a need-to-know basis. Each of us probably knows someone with a DSD ; we've just not been told about the condition.

The number of waiting children with ambiguous genitalia is astounding.

View the 17 children with Ambiguous Genitalia waiting for adoption on RainbowKids!

They are healthy children who just happen to have a difference in one part of their body. We all look at my son, shake our heads, and cannot fathom that his special need was ever considered "significant," by us or anyone else. I can't imagine life without our beautiful, normal , son. If we adopt again, we will definitely adopt a child with a DSD.

Based on what we learned, I now believe that pre-adoption testing for children with DSDs is rather pointless. Sending countries do not have the resources to adequately test children and invasive procedures subject children to unnecessary trauma. Our son was definitely traumatized by endless blood draws requested by earlier prospective families that really told us nothing of consequence.

Gotta go now. My sweet boy is calling. And I don't want to miss a minute!

Ten Tips for Surviving the "Trenches" in Adoption