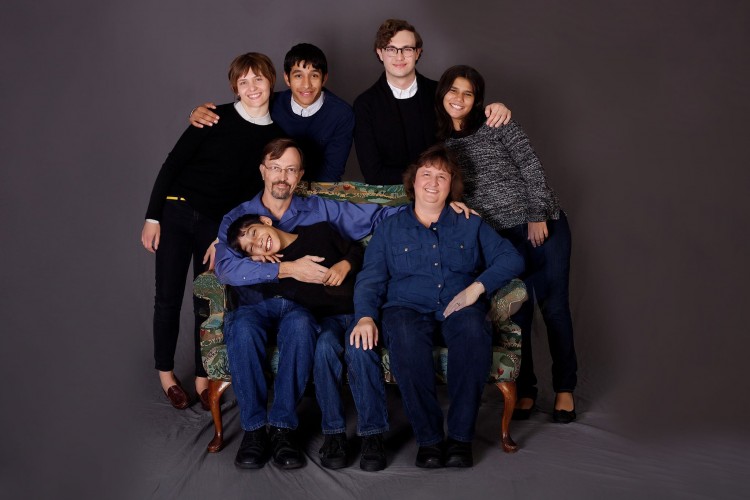 Several years ago, our family of four hosted an eleven-year-old Ukrainian boy during the summer. Misha changed our lives forever. In those short five weeks, we fell in love with him and decided to pursue adoption. We were not yet legally allowed to inform Misha of our decision before he returned to Ukraine. When the time came for us to put him on a plane back to Ukraine, saying goodbye was one of the hardest things our family had done. The fact that he wailed out loud and shed huge tears while hugging me in a death grip didn’t help ease our emotional pain. In fact, those tears were the first we had seen during our 5 weeks with him. It was especially hard for me. The very first English word he uttered as his tiny hand tightly held mine, looking me in the eyes as we walked to the car at the airport, was “Daa-Dee”. I knew then I was in for an emotional 5 weeks.

Not long after we started the adoption process, we were informed that he had an older brother Ivan (15), and a sister Marta (13) – both at another orphanage. Further, we were told Ukraine prefers not to separate sibling groups and that both of them would have to sign an agreement for separation and possibly appear in the adoption courtroom. What? Really?

"How could we face his siblings and tell them, “We only want to adopt your brother.” No, such a thing would not be possible for us. So we made preparations and set our course for adopting all three."

While we waited on government paperwork, we were given access to pictures of the older siblings. We could see the similarities and were anxious to meet them. But, having grown up in a separate orphanage, we asked ourselves, “How different will they be?” “Will they be anything like the boy we know?”  “What if they don’t want to be adopted, and don’t agree to the separation?” There were many unknowns. When the day came that we first met Ivan and Marta, we were nervous. We later learned they were nervous too. However, they had been told of our arrival a few days before and had already spoken to their younger brother on the phone – perhaps the first time they had spoken in 7 years – and had asked about us. After the phone call, Ivan and Marta talked it over and had already signed an agreement to adoption before our arrival! We learned they had dreamed of being adopted for years! What joy!

So together we learned to be a family. This was something new for Ivan, Marta, and Misha because they had never lived in a warm, loving, family environment. It was a lot of work to teach them how to get along with each other and with their new family members. We even had to teach them how to hug. At first, they would receive hugs with their arms down at their sides - they didn’t know how to reciprocate.

When we said, “I love you”, their response was not, “I love you too”, but instead “Why?” We repeated countless times the reasons why we love them and they would just listen with embarrassed smiles. Family love was a hard concept for them to understand.

But with unwavering determination and many examples, they have finally come to understand that we truly love them. Our two older biological children, Kyle and Kelly, (19 and 17 at the time of adoption) share a very close relationship and are an excellent model for them to learn from. Ivan, Marta, and Misha have finally internalized the concept of family love because they now seek and initiate hugs with adoring affection. They realize our love is for real and it’s not going away – no matter what they do. There have been many occasions where something has been broken or they have done something wrong, and they fully expect one of us to go off in a rant. But we assure them that they are far more important to us than whatever material item was broken and we coach them on how to correct the wrong that was committed. The look on their faces each time they hear that we love them no matter what, is priceless. We have worked hard, very hard, at persistently trying to teach Ivan, Marta, and Misha how to respect each other. This was such a different concept from institutional life where the strongest survived. We have slowly and carefully held all of them accountable for adhering to the Golden Rule - treat others as you would like to be treated.

A few months ago, the Ukrainian facilitator who helped us with the adoption process (we got to know him very well because our whole family travelled and stayed in Ukraine for the 73 day adoption process), was in the US as a hosting chaperone and we had the opportunity to spend a day with him. He could not believe that Ivan, Marta and Misha were the same kids he knew from a few years ago. The change for him was quite amazing.

All in all, it has been a joy to watch Ivan, Marta, and Misha grow and mature over these past two years.  We have overheard them politely correcting each other on occasion, and we are now seeing them interact with each other in a loving, caring way. We have taught them to think beyond just themselves, beyond just today, and that actions have consequences that often affect the people around them. They are developing a healthy relationship filled with laughter and genuine family love. And we can’t imagine our family without them!

Should Your Family Go On a Birthland Tour? YES!