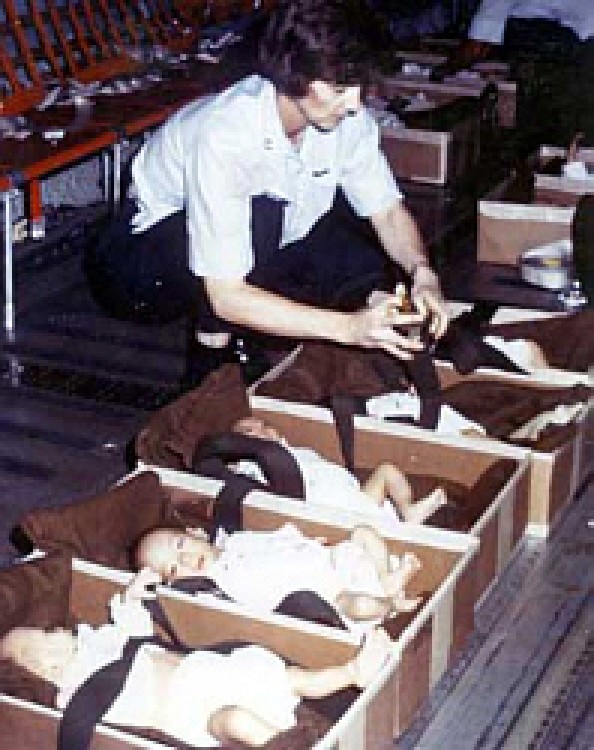 When I had agreed to be the next volunteer to escort six babies from Vietnam to their adoptive homes in the United States , there had been no increase in the war for many months. Still, the decision to leave Mark and our two chubby-cheeked little girls for two weeks, was difficult, at best. When I asked Mark what he thought I should do, he only said, You've gotta do what you gotta do, Honey. But I knew the words, Please, don't go! were screaming inside him.

I considered how firsthand information would be helpful for our local Friends of Children of Vietnam chapter. Mark and I had applied for adoption of a son through FCVN and expected him in two to three years. I thought it might mean something to him someday to know his mom had been to his homeland. Every call we made to the U.S. State Department gave the same encouraging advice; the war was not expected to escalate. Go.

So after much prayer and thought, I said I would.

The day before I was to leave, I heard on the radio there was bombing within three miles of the city limits of Saigon . It was Easter Sunday and I knelt in church, fearful and trembling, begging God for a sign I did not have to go. Instead I was filled with a courage, conviction and certainty. I knew I'd be safe. God would take care of me.

I couldn't explain my new-found strength to myself, much less anyone else. I lingered in Mark's arms, hoping his love and trust for me were greater than his fears.

Until I was greeted by Cherie, FCVN's Saigon director. Have you heard the news? she exclaimed. "President Ford has okayed a giant orphan airlift! Instead of taking out six babies, you'll help take out 300 if we're lucky!"

All the questions, all the doubts, were answered.

As she drove through the overcrowded, chaotic streets, Cherie explained how dozens of babies were being brought to the FCVN Center to prepare for the evacuation. Still, my years as a pediatric nurse could not prepare me for what I witnessed there. Every inch of floor was covered with a mat and every inch of mat was covered with babies! We spent the entire first day helping the Vietnamese workers diaper and feed scores of babbling, cooing, crying infants.

The next day, I learned that FCVN had been bumped from the first place position in Operation Babylift. I fought and I argued to reclaim the right to take the first planeload of orphans to the United States . But to no avail.

With disappointment still heavy in our hearts, we instead loaded babies destined for our Australia chapter. With twenty-two babies around me on the floor of a Volkswagon van, we headed to the airport. There, we saw an enormous black cloud billowing at the end of the runway. We heard the rumor - - the first plane load of orphans, the one I had begged to be on, had crashed after takeoff, killing half of the adults and children onboard.

Stunned, we loaded the babies onto the Australian airliner, then returned to the FCVN Center where the rumor was confirmed. The office was awash with grief. I looked at my watch, still on Iowa time. The girls were having breakfast in their fuzzy pajamas. Mark was shaving and listening to the radio. He would hear the news and be terrified I was on that flight. And there was no way for me to call and spare him this horror and heartache. I slumped onto a rattan sofa and sobbed uncontrollably.

Finally, I went to Cherie, admitted my cowardice, and told her I had to go home. "Now". With sorrowful tears in her eyes too, she tenderly informed me that there were no flights out. My best, and likely the only way home, was on an airlift plane.

I went back to the nursery, mustering a renewed faith and confidence. I rejoined the workers preparing the babies for our flight - - -whenever that would be.

The next day at breakfast Cherie sat beside me. "LeAnn, you and Mark will be adopting one of those babies in the next room. All your paper work is here and in order. You can wait and be assigned a son from across the desk in the States, or you can go in there and choose a son."

Speechless, I entered the next room and hop-scotched through the sea of babies. Then, a little boy, wearing only a diaper, crawled across the floor and into my arms and heart. As I cuddled him, he nestled his head into my shoulder and seemed to hug me back. I carried him around the room, looking at and touching the other babies. I whispered a prayer for the decision I was about to make, knowing it would change many lives forever. Oh, Mark, I wish you were here." I moaned. "How do I choose?" The little boy in my arms answered by patting my face.

"I know, Mitchell," I cooed, testing the name we'd picked. "You were created to be our son."

I knew then, this is why God sent me to Vietnam . I'd been sent to choose a son--or had he chosen me?

Two days later, it was our turn to leave. The workers helped us load the babies onto a city bus taking them to their flight to freedom. Nine of us volunteers cared for 100 babies, placed three and four to a cardboard box. In spite of the stress, it was joyful work as we propped countless bottles and changed diarrhea diapers.

In the Philippines we got a larger plane and more volunteers, then continued the next leg of our journey to Hawaii . There, every child was removed from the plane while it was refueled.

Finally, I could call Mark.

The noise around the phone booth was so loud, I had to shout instructions to the operator. I mumbled to myself, "Mark doesn't even know we have a son. He has no idea I'm bringing him home."

I had rehearsed how I would tell him the wonderful news, but when I heard his voice, I could only blurt out, "Honey, this is LeAnn," and I started to bawl.

I could hear him repeating my name as he too sobbed. I tried to compose myself so I could tell him about Mitchell, but I couldn't catch my breath.

Then, still crying, he said, "Just tell me you're bringing me our son."

Originally published in Chicken Soup for the Adopted Soul, Authored by LeAnn Thieman.
To order personalized copies or get information about her inspirational keynotes and seminars, see her websites at www.LeAnnThieman.com and www. NurseRecruitmentandRetention. com .