Successfully Adopting as a Single Parent Requires Plan for Support 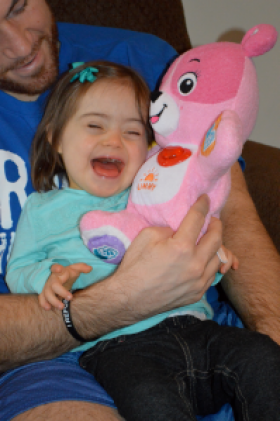 Opening the Eyes, Heart and Mind to Down Syndrome Adoption

Anthony and Ashley knew there were children with special needs who needed families, and once they began the process to adopt, they started to really think about the child they would later bring home. As they researched different diagnoses, they realized for the first time how many different needs they felt equipped to handle, and began looking at profiles of waiting children. One condition they saw come up again and again was Down syndrome. With Ashley’s nursing background, knowledge of sign language and experience baby-sitting a little girl with Down syndrome, they realized that ultimately, this was the direction in which their family was being called. They quickly got to work consulting with doctors and reaching out to other families who were raising children with Down syndrome. “WACAP was amazing during these moments,” Ashley recalls. “Staff talked with us, recommended resources and made sure we looked into resources available in our community ahead of time.” They were soon matched with their daughter Alaina, whose name means “beautiful light of hope.” In the beginning “she was nervous with us,” Ashely tells us. “She mourned leaving the only home she had ever known. Our hearts ached for her situation.” After just three months home, the family is seeing remarkable changes in Alaina. Her nervousness is subsiding as she learns to be part of a family. She’s getting physically stronger and learning new things every day, thanks to her new brother and sister. In return, Alaina has taught her new family to celebrate things they may have previously taken for granted. “I cannot explain what a reward every simple accomplishment is to our family!” Ashley exclaims. “It is incredible to watch her little eyes and face fill with life!” Daily life has changed somewhat for the whole family as they keep up with Alaina’s therapy and doctor’s appointments, as well as the occasional set back as Alaina adjusts to family life. Through it all though, Ashley remembers what adoption is really about. “On some of the days where helplessness has overwhelmed me, I have to remember that Alaina’s life would have looked so different if she did not join our family,” Ashley writes. “She is home. She belongs. She is LOVED. Her life will never be the same and ours is so blessed because of that.”

Nikolai—No Longer Alone in the World

For Nathan and Rebecca, adoption was always part of the plan when it came to building a family. Newly married, they were just beginning to explore their options when they saw Nikolai’s picture on WACAP’s waiting child website. “We weren’t actually planning on starting the adoption process when we first saw him,” Rebecca writes. “But there he was and Nathan suggested we inquire.” They then began the process of working with WACAP to bring Nikolai home. In addition to the adoption paperwork and training, Nathan and Rebecca read anything and everything they thought could be beneficial. As first-time parents they made sure to network with other families who were raising children with Down syndrome, ensuring that they would be fully prepared to meet Nikolai’s needs. “WACAP was so helpful and supportive during the entire process, and we never would have been able to complete our adoption if it weren’t for the generous grant we were given,” Rebecca remembers. Nikolai came home in December “to quite a fan club,” and is growing by leaps and bounds with the love of his family. In addition to learning to walk and starting to communicate, both things he was unable to do in Bulgaria, his life has changed in a profound way. His mother reflects, “In the orphanage, his entire life was dictated by a schedule. He never had the opportunity to express his wants or needs and therefore believed himself to be a bystander in the world. Now, he’s starting to realize that he is not a bystander; he has a voice.” With everything Nikolai has learned and continues to learn, Rebecca feels that one lesson is the most important of all: “He’s learning that he is no longer alone in the world. He has a mother and a father to lean on for love and support, and an entire extended family of people who will bend over backwards for him. He has value, purpose, and a place in this world.”

With their adoptions completed so recently, both Ashley and Rebecca admit to feeling a bit sheepish when it comes to giving advice to others considering adoption of a child with Down syndrome. However, they both speak with wisdom and compassion.

From Rebecca: Nathan and I would suggest new families should read and research as much as they possibly can about their future child’s diagnosis, adoption, and attachment. Read all the stories with happy endings, and read the blogs of families who are struggling. Go into the process with your eyes, heart, and mind open, and try to have as few expectations as possible. Remember that every child, every family, and every experience is different. Flexibility, a sense of humor, and a strong support network are essential, especially during those first few months home.

From Ashley: Anthony and I would encourage you to discuss this decision carefully, making sure to embrace the tough scenarios. Do not be afraid to think about what it will look like in five years, 10 years, or even 20. Pity is not the same thing as love. Empathy will not last through the difficult nights and years of advocating that you have ahead. However, we would highly encourage those who might be considering this that they will not be disappointed.

Both moms agree that despite the hard times, at the end of the day it’s absolutely worth it. “Ultimately, I would encourage families to dwell on all the positive reasons to adopt, rather than all the logical reasons that might hinder you,” Ashley advises. “We have been greatly stretched and amazingly rewarded already! There is nothing more incredible than watching this glorious unfolding of transformation through love.”

Down syndrome is a big part of who my son is,” Rebecca states. “But it doesn’t define him. Yes, he will have to work harder to achieve milestones that come naturally to many other children, and yes, he will likely need extra help and support as he grows into adulthood and beyond.” She continues, “He also has a magnetic personality with more unbridled enthusiasm for life than I have seen in a long time. He has an infectious laugh that can bring the most stoic people to their knees. He has brought us more joy than I ever thought possible, and he makes me proud every single day.”