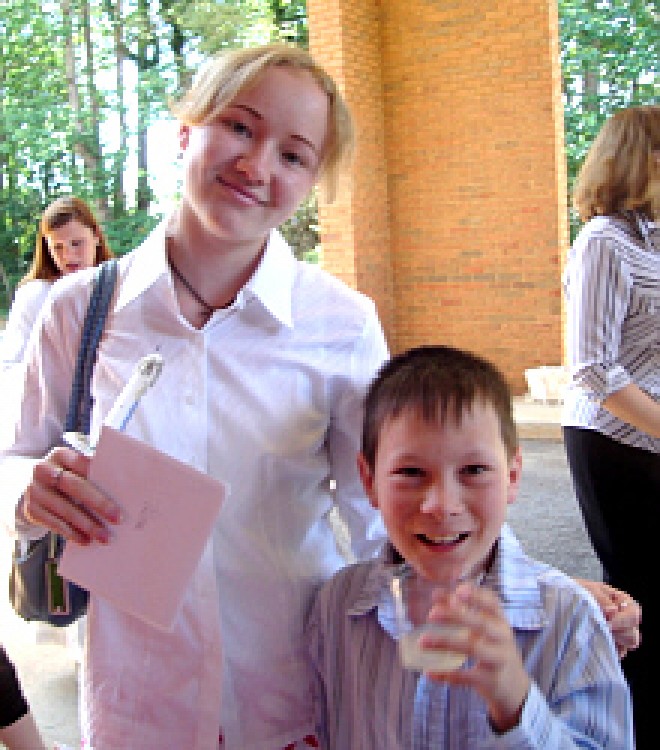 If someone had told me a few years ago that I would build my family through the overseas adoption of older children, I know that I would have laughed. I was a single woman, plowing through the choppy seas of the dating world for many years, but I was still looking to get married and start a family the 'normal way.'

Today, I am still single, but I am also the adoptive parent of two children. My life is wonderful and filled with joys that I couldn't have imagined years ago.

Adopting my daughter was an amazing adventure. More so because adoption wasn't on my mind at all when I met her. In 2003 I was asked to be part of a choir to go to Khabarovsk, Russia, to sing Handel's Messiah with the symphony there. While touring, we were asked to sing in local orphanage and it was there that my life was changed forever. Looking out on our audience of orphanage staff and children, my eyes locked on those of an 11-year-old girl. There is no way to explain the immediate connection I felt, but at that moment my heart and mind were clear: This little girl would one day become my daughter. I had dreamed about her the night before even though I had no idea we would be going to her orphanage the next day. That dream would take almost 18 months to become a reality.

I had to contend with bureaucratic snags, an orphanage director who didn't like Americans, a lack of money, an unsupportive agency, some very negative friends and family members, and a boyfriend who couldn't handle the idea of fatherhood. I was a bit anxious about adopting an older child, but my heart told me it was the right thing to do. Through it all, my focus remained steady: I would bring my daughter home.

Alesia is now 15 years of age, and has been home for two and a half years. We have had some challenges, but we are a strong family, held together by love, faith in God, and a lot of laughter. Older children who are adopted by singles or couples face many issues that babies or toddlers don't. Older children have usually had to learn to be tough to survive in orphanages. Many develop a range of PI [post institutionalized] behaviors everything from hoarding food, to an inability to show affection, to chronic lying. They often have a limited capacity to love and trust. These behaviors and emotions must be worked on in a family, and sometimes take years to work through. I have seen these behaviors in my daughter, although not to a great extent, and she is over them now. Alesia spent her first 6 years with an alcoholic, single teenaged birthmother. Despite that, Alesia is now a sweet, good-hearted girl she just had a rough start in life.

In 2005, I decided to sell my condo and buy a house with my mother, who was looking for a retirement home. I would be there to assist her as she grew older, and she would help me with childcare. We were fortunate to find a lovely older home in a quiet residential area of Atlanta . A few weeks after we moved in, tragedy struck. My mother fell and broke both shoulders a disaster. My daughter had been home less than a year and still wasn't speaking English too well. My house held many boxes to unpack. I was working full time. For several days, I was in shock, spending hours at the hospital while a friend cared for my daughter.

When he was able, my only sibling, my brother Bruce, came over from his home of Columbia , SC [three hours away] to help me with everything. If he had not come, I would have had to take a leave from work, unpaid, and I couldn't afford that. I was so heavily dependent on him throughout the crisis that it really made me think. I began to feel strongly that my daughter needed a sibling. I am in my 40's and obviously won't be around forever.

Once my mother was out of danger and on her way to recovery, I started researching, trolling the internet looking at photolistings of children available for adoption. I decided to adopt another Russian speaking child, to help my daughter with bonding, and because I also speak a little bit of Russian. It's heartbreaking, looking at all the photos and wondering, " which child should I choose? Which child would fit in our family?"

Finally, I prayed about it. I asked God to give me some help, some sign to know which child was truly meant to be in our little family. The moment I opened my eyes, I saw a listing of a little boy named Igor. He was missing his right hand due to a frostbite accident while in the care of his birthparents. He looked very similar to how my brother looked at age 9 same burr haircut, freckles, unsmiling little face. He was born in July 1996 the exact same month my father died. In my heart I knew: This is My Son.

It took some time and prayer to get my mother and daughter onboard with the idea of adopting little Igor. He was not too adorable in the photo. My daughter, who had never seen anyone with a limb difference, was appalled. In Russia , people who are in any way not 'normal' are hidden away, out of sight, usually in remote institutions. My mother just worried that raising a handicapped child would be too difficult.

I looked at other listings, but little Igor stayed in my mind. I prayed and prayed about it, for months. Finally, one night Alesia was in my room, sitting next to me at the computer as I looked at photolistings. I deliberately went back to Igor's listing. She shrank back.

I said gently, "Alesia, a lot of people will simply not adopt a child who is 9 years old. He has no chance if he stays there. People thought I shouldn't adopt you because you were older but you needed a mom. You needed a family to love you. Don't you think this little boy would love to have a mom? Think about that."

Alesia did think about it, and on her own she had a change of heart and mind. My mother gradually accepted the idea. I knew they were both scared for me to go overseas for several weeks. I wasn't thrilled with the idea. However, I just knew this was the child for us. The agency coordinator cut the fees so I could afford it. I cashed in a 401-K rollover and started the paperwork.

Last summer, while waiting for my INS clearance, I wrote and published a children's book, aimed at helping my son adjust to America . I based it on personal experience, and did a lot of research. I called it Jack's New Family, An Older Child Adoption Story . It's written from the standpoint of Ilya, an 8 year old Russian boy who has lived his whole life in an orphanage in Russia . Now that he's been adopted he must adjust to life in America with his new mom and older sister, learn English, and try to become an American boy named Jack. As he tells the story in his own words, he marvels at the many differences between an American home and a family, and his experiences as an orphan.

I knew what a tough transition it would be for my son. When I had adopted Alesia, she had never been to a restaurant, rarely used a napkin, and never lived in a place with decent plumbing. She had only ridden in a car a few times in her life. I was totally unprepared for how unsophisticated she would be. I have learned so much since she came home. That knowledge went into making Jack's New Family a unique book.

In February 2007, when I finally got word I could travel, I was thrilled to finally be able to get my son home. I had just gotten the published copies of the book and had a copy for my son ready.

After a grueling total of 15 hours flying and a one day layover in Astana, I arrived in Petropavlovsk , Kazakhstan . I spent a month in Petropavlovsk the coldest March of my entire life! I had never seen so much snow. It never melted. Petropavlovsk is just below Siberia .

Every day, as I spent time with "Igor" at the orphanage, we became close. Kazakhstan has a mandatory 14 day bonding time required before court can take place, which is a very good thing. Every day, I told my son stories about my family, and gave him photos. He was fascinated.

On the 4 th visiting day, I showed him a list of American names, explaining through the translator [ironically also named Igor] that life in America would be easier with a more American name. He chose Michael with no hesitation.

When the judge pronounced Michael mine a few weeks later, I jumped up and down and hugged everyone with me the translator, the agency coordinator, the social worker from the orphanage. Finally, with tears in my eyes, I ran outside and grabbed up Michael and said in Russian "I am your MAMA!" He grinned and gave me a big hug. Just remembering it makes me want to simultaneously smile and cry.

Michael has been home since May 9 th , and is adjusting beautifully to everything even the Atlanta heat. Despite the fact that Michael spent his first 8 years with a mother who severely neglected him, he has a sweet nature. He is the most loving and affectionate little boy. He is mischievous, too he regularly pops his big sister on the fanny, vetoes wardrobe choices, and mimics his mother and grandmother's southern accents but not in a mean way. He also doesn't let his missing hand stop him from doing anything.

Michael read Jack's New Family in Russian a couple of times before he came home. I think it helped him to understand that America would not be full of cowboys and movie stars, and he wouldn't get everything he wanted, every minute of the day. He has chores here. He has a bedtime. He has to eat vegetables. He also has a Mom, sister, and Granny who adore him.

Jack's New Family , was published by United Writer's Press. It's a valuable resource for children who speak only Russian, because it's in Russian and English. It's great for parents, because it gives them an idea of how big a transition it is for an older child to go from living in an orphanage, to being in a family.

I have recounted my son's adoption adventure in my blogsite, Jack's New Family, An Older Child Adoption Story .

I hope my story will inspire others [whether or married or single] to adopt older children, whether here or abroad. There are so many wonderful children who need and deserve a loving family. My children have enriched my life so much, and I have made it one of my life's missions to help older children find homes.