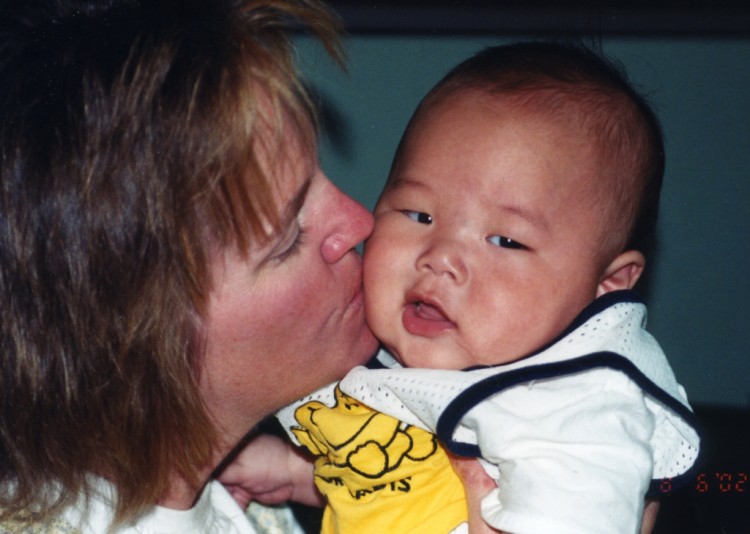 “From the very first moment I beheld him, my heart was irrevocably gone.” ~ Jane Austen

One of my favorite quotes. I love it because I get it. I get how it feels, to know that wave of warmth. When your heart feels beyond all thought. I know what it is like to have my heart captured. Jane Austen never married. She was engaged. Once. But within hours of accepting a proposal for an arranged marriage she walked away because her heart felt no affection toward the man, yet she still held on to a belief that there was a power, the power of a love, that could surrender the heart.

I’ve had those moments, my moments, where my own heart was irrevocably gone.

A summer monsoon blew in on our tails the night we landed at Incheon International Airport in Seoul, South Korea. As the Korean case worker assigned to greet me at the gate hurried my friend Melissa and I to the car she threw out a “by the way” you will meet Yoon Jae Bum tomorrow morning at 10:00am. It was closing in on midnight, so sadly I didn’t have a moment to feel sorry for myself and ‘suffer’ from the ill effects of international jet lag. In truth, I reclined in my bed for maybe four hours and spent the rest of the time in our hotel room sitting on the window sill contemplating the hours ahead as I watched the capital city slowly arise from its slumber. Somewhere out there, in that massive city was my new son, Yoon Jae Bum.

The following morning Melissa and I took off from our hotel to meet Yoon Jae Bum via the Seoul subway system. We had been told over and over how simple the color coded system was. Melissa, a world traveler, pushed me toward a confidence that I too could handle this adventure. We had about twenty stops before we would reach the Mapo-gu district where the Holt office was, so we settled into our seats, a bag of delicious Mandu dumplings in hand, and silently counted down the stops until we reached our stop, as our fellow subway travelers, all Korean, pointed to Melissa’s nose, gestured to each other about how big it was, and giggled into their hands.

Somewhere along the line I lost track of where we were on the map. Probably because those darn dumplings were so incredibly mind blowing. Crispy outside. Cream filled inside. Really, enough to make you lose all logical thought. I looked at a map above the door of the subway and was confident the next stop was our stop. So confident was I that I not only stood up but bolted toward the open doors and was standing on the platform as the subway doors brushed closed with Melissa on the other side of the door being whisked away through the underbelly of Seoul.

IF…you have ever wanted to experience the feeling of complete and utter helplessness I would highly suggest disconnecting yourself from you lifeline in a distant world twenty minutes before you are to meet your four month old son for the very first time. Yeah. Complete. Utter. Helplessness.

Fortunately an angel in the form of a Korean businessman saw my predicament and immediately swooped in to save me. Cryptically I explained to him my situation. He took a deep long sigh, glanced at his watch, sighed again, grasped my elbow, probably rolled his eyes, but not in front of me, and escorted me onto the next subway train. Several minutes later Melissa stood on the platform of the next stop. She jumped in and we were once again on our way, with the Korean businessman at my side, gripping my elbow with his own rendition of the Vulcan death grip. When we got to our stop he gently pushed us out the door and motioned us to follow him. He kept glancing at his watch as he set a race walker pace toward the stairs to led us above. With each stair step we ascended, the controlled climate of the underground slowly began to be pushed back to the depths with an oppressive, post monsoon humidity spiced with the scent of fermented kimchi that immediately plastered my hair to my skull. As much as I wanted to yell to the guy to slow down I couldn’t. We would have been lost without him.

Thirty minutes after watching Melissa’s profile whoosh away in the Seoul subway only to be reunited at the next stop we were delivered to the door of the Holt offices. We couldn’t bow low enough to show our gratitude to our new friend, the Korean businessman. He quickly turned on his heels and within a few steps was lost in the tide of black haired people streaming down the steps to the subway.

Melissa and I staggered into the office with just minutes to spare and took a seat in the waiting area. Within a minute a petite foster mom shuffled into the waiting room with this fat, and I mean two chin and about seventeen rolls per arm, baby strapped to her back. I leaned over to Melissa and made a comment about the baby’s legs looking like hams when Melissa whispered back, “I think that’s your son.” I snickered and shook my head. She repeated herself, “Julie, I’m quite sure that’s your son.” Again I shook my head, no no, my son, according to his records was not this chunky monkey that was taking up more than enough of this poor foster mom’s lap. Melissa ordered me to look past the fat and into the eyes of the baby across the room. She could see it. She could see the son I couldn’t. At that moment I really saw him. My son. Mrs. Shin, my case worker, swept into the room and in broken English said, “Ah, so you have met your son!”

Without hesitation Mrs. Lee Jae Hee, Yoon Jae Bum’s foster mom, placed him in my arms. And the moment he nuzzled into my neck and with his chubby little dimpled hands, grasped my hair and squeezed it tight for comfort, it is safe to say my heart was irrevocably gone. Eighteen months later, Melissa and I travelled to China to bring home Baoshan. I think most parents who adopt would agree after months of thumbnail prints and small 4×6 picture updates, you begin to create this rockstar personification of your adopted child in your mind. Then, the moment arrives. The moment you finally meet. When I first saw Baoshan I was shocked with how tiny he truly was. When he walked toward me, he clutched in his hands a brown paper bag about the size of an ordinary lunch bag. In my entitled American mind I thought, “How sweet, he’s bringing me a gift.” In truth that bag held everything HE owned in the world. It held a sea shell whistle. It was as if I had been socked in the stomach when I realized my ignorance. I didn’t deserve a gift. He was my gift. It was the biggest defining moment of my life.

It was at that moment, in the bathroom of the Peace Hotel, as I helped my tiny vulnerable son step out of his orphanage clothes and into his very first bath, that my heart was irrevocably gone. Eight years ago I met Musse in Addis Ababa, Ethiopia. He immediatley jumped into my arms. He smiled for me. He danced for me. He held my hand. He giggled. We hiked across a gorge that looked over the Blue Nile. We laughed through language barriers. He showed me a charm I never thought possible in a just-six-year-old child. We connected. And for a third time in my life, because of a shinning warm soul that I had just met, and in Ms. Austen’s own beautiful words that I so so so get now, my heart was...irrevocably gone.

On the three special days I met my sons, days most adopted families refer to as Gotcha Day, I prefer to think of them as  Heart Day because really, there is no other emotion or words that can convey that moment so eloquently penned almost two centuries ago, that moment when my heart truly was completely captured each time by my three beautiful sons.

Sadly, there is a crisis, an overwhelming crisis both in the US and around the world of boys waiting for their forever families. Today, just like yesterday and last week and last year these Heart Day moments are never realized for one reason or another. So I ask you, "Why not boys?" I've said it before, I've learned a thing or two about raising my boys from around the world, and yes it is a sometimes mud-filled, snake holding, rock throwing, tree climbing existence but I also know, at the end of my day, my heart continues to warmly smile, just like it did the very first moments I beheld them so many years ago.

Five Facts to Consider When Choosing an Adoption Agency

A Letter to New Adoptive Parents...